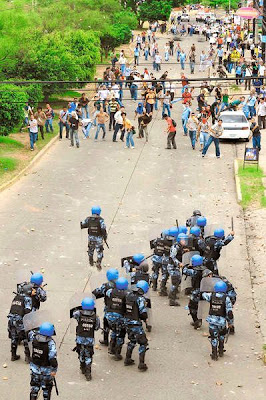 Students and police outside university in Tegucigalpa. Photo from La Prensa, Honduras.
State Department backs away from support for Zelaya while resistance is met with more violence

‘What happened today is the most brutal repression we have lived through,’ labor and anti-coup leader Juan Barahona said after a demonstration in Tegucigalpa on July 30.

While the battle of Honduras rages, the U.S. State Department has backed away from its earlier strong condemnation of the ouster of President Manuel Zelaya and made clear its unwillingness to declare it a coup d’état. U.S. law would require cutting off economic aid altogether if in the judgement of the State Department a coup had occurred, a step widely considered crucial to forcing the resignation of the golpista government and the reinstatement of Zelaya.

“We have rejected calls for crippling economic sanctions,” announced Richard Verma, a State Department assistant secretary, in a letter to Republican Senator Richard Lugar dated August 4. Verma wrote, “Our policy and strategy for engagement is not based on supporting any particular politician or individual.” Thus in the State Department’s view, democratically elected President Manuel Zelaya and president by force of arms Roberto Micheletti have equal standing.

The letter goes on to claim Zelaya’s “insistence on undertaking provocative actions contributed to the polarization of Honduran society and led to a confrontation that unleashed the events that led to his removal.” Honduran military officers abducted Zelaya at gunpoint and flew him out of the country early in the morning of June 28, hours before a scheduled nonbinding referendum on the question of rewriting the constitution, a referendum Zelaya and large sectors of the population supported but that rightists claimed was in reality an attempt to extend his rule beyond the single four-year term permitted by the current constitution.

In an August 1 interview in La Jornada of Mexico City, journalist Arturo Cano pointed out to Ramón Custodio, human rights commissioner in the Micheletti regime, that Zelaya had not proposed his own re-election but a constituent assembly. “It was moving in that direction,” Custodio replied. “The constituent assembly was going to be installed by the end of the day (June 28, the day of the coup) and the members were going to be those who had been with him the night before the referendum, and they know it.”

In the meantime, the repression of coup opponents has intensified. “What happened today is the most brutal repression we have lived through,” labor and anti-coup leader Juan Barahona said after a demonstration in Tegucigalpa on July 30. Police used teargas and clubs against the demonstrators, jailing many and shooting one, Roger Abraham Vallejo, a member of the teacher’s union, who died the following Saturday. Another teacher, Martín Florencio Rivera Barrientos, was stabbed to death the next day after attending a wake for Vallejo. “This is a campaign of intimidation against the teacher’s union, the largest and best organized in the country,” according to a union official.

Police attacked a student demonstration reportedly numbering 3,000 outside the campus of the National Autonomous University of Honduras on August 5, using teargas and water cannons to drive them back onto the campus, where they beat and arrested many of them. By tradition, “autonomous” universities in Latin America are sanctuaries for political dissidents and government forces are excluded from them. The university rector, Julieta Castellanos, was beaten and knocked to the ground when she tried to intervene on the students’ behalf.

And the Honduran telecommunications commission has ordered the closing of Radio Globo, the only remaining widely available source of news in the country not controlled by the de facto government or its supporters. The government has charged the station with sedition.

At a rally in Tegucigalpa on August 3, Rafael Alegría and other leading opponents of the coup said military chief of staff General Romeo Vásquez and de facto President Roberto Micheletti have instigated what they called “Operation Tundra,” a revival of Batallion 3-16, the notorious death squad of the ‘80s, to eliminate opposition to the golpista government. 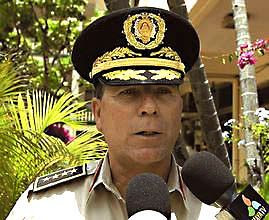 General García Padget: “socialism disguised as democracy.” Photo from La Prensa, Honduras.
The generals who carried out the coup have shown no regrets. In a television program featuring the chairman of the joint chiefs of staff and the commanders of the army, the air force and the navy, army General Miguel Ángel García Padget said that by removing Zelaya he and his fellow golpistas had put a stop to “that expansionist plan for carrying to the very heart of the United States a socialism disguised as democracy,” a plan devised by Venezuelan President Hugo Chávez, according to García Padget, to spread Socialism for the Twenty-First Century over the entire continent.

Head of the navy Admiral Juan Pablo Rodríguez told the television audience, “The democratic system was being threatened because that referendum was an effort to establish a national constituent assembly… The entire system would have been toppled for the interests of a small group.”

There are continuing reports of divisions in the armed forces, however. In an August 3 interview, Minister of Education in the Zelaya government Marlon Brevé Reyes repeated claims made earlier by Zelaya that lower ranking officers disagree strongly with the generals and resent being held responsible for the coup. Zelaya and Brevé both said the coup government would collapse when the dissident officers deposed the generals.

A statement attributed to the Movimiento de Oficiales Superiores y Subalternos de las Fuerzas Armadas (Movement of Superior and Subordinate Officers of the Armed Forces) and distributed on July 29 by anti-coup organizations declared, “Politicians, in collusion with military commanders, have implicated the armed forces and have damaged the good reputation we had with the Honduran people.”

But there are also differences of opinion among those opposed to the coup and some dissatisfation with Zelaya’s strategy. At a meeting of the Frente Nacional contra el Golpe de Estado on August 2 to plan a national march, one participant declared, “We are not going to win this struggle in the mountains, we are going to win it in the streets and the highways,” a reference to Zelaya’s forming a “peaceful popular army” in Ocotal, Nicaragua, near the Honduran border. Made up of anti-coup Hondurans who had followed Zelaya into Nicaragua, the army would supposedly return to Honduras eventually to be joined by others opposed to the coup.

Beyond the reinstatement of Zelaya, talk at the meeting was of the struggle “for a new Honduras.” “First we have to get rid of the golpistas,” one activist at the meeting said, “then bring back Zelaya and immediately afterward form a national constituent assembly.”

Zelaya has recently announced that he would accept the latest version of the San José Accords offered by Costa Rican President Óscar Arias which, among other provisions, call for his reinstatement but with greatly reduced power and for abandoning any efforts to rewrite the constitution. The Frente has consistently opposed all Arias’ proposals except the reinstatement of Zelaya and has insisted on efforts to write a new constitution.