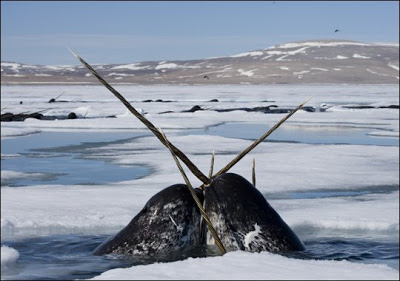 Although the polar bear has become an icon of global warming vulnerability, a new study found an Arctic mammal that may be even more at risk: the narwhal. The study found the whale with the long tusk ranked just ahead of the polar bear and nine other animals. Getty Images.
Narwhals Threatened by Polar Melt
By Seth Borenstein / April 25, 2008

The polar bear has become an icon of global warming vulnerability, but a new study found an Arctic mammal that may be even more at risk to climate change: the narwhal.

The narwhal, a whale with a long spiral tusk that inspired the myth of the unicorn, edged out the polar bear for the ranking of most potentially vulnerable in a climate change risk analysis of Arctic marine mammals.

The study was published this week in the peer-reviewed journal Ecological Applications. Polar bears are considered marine mammals because they are dependent on the water and are included as a species in the U.S. Marine Mammal Protection Act.

Scientists from three countries quantified the vulnerabilities that 11 year-round Arctic sea mammals have as the world warms. After the narwhal — which is also known as the “corpse whale” — and polar bear, the most at risk were the hooded seal, bowhead whale and walrus. The ringed seal and bearded seal were least at risk.

“What we wanted to do was look at the whole picture because there’s been a lot of attention on polar bears,” said study co-author Ian Stirling, a polar bear and seal specialist for the Canadian government. “We’re talking about a whole ecosystem. We’re talking about several different species that use ice extensively and are very vulnerable.”

This doesn’t mean the narwhal — with a current population of 50,000 to 80,000 — will die off first; polar bear counts are closer to 20,000 and they are directly harmed by melting ice, scientists said.

Read all of it here. / AP / Discovery News
The Rag Blog

This entry was posted in RagBlog and tagged Environment, Global Warming, Nature. Bookmark the permalink.