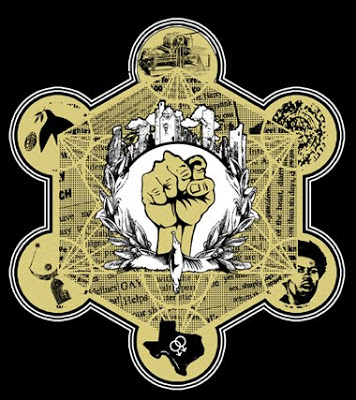 [Raj Mankad is the editor of Cite magazine, the “architecture and design review of Houston” that has been published quarterly by the Rice Design Alliance since 1982. OffCite, where this article first appeared, is Cite’s online incarnation.]

“The Knights of the Ku Klux Klan is watching you.”

An arrow bearing that note was shot into the Space City! office. The incident was one among many threats and acts of violence against progressive and radical institutions in Houston. The KPFT station transmitter was bombed off the air twice. Bullets were shot at and yellow paint thrown on the walls of Margaret Webb Dreyer’s gallery, which she ran out of her home from 1961 to 1975. The gallery had served as a counterculture hub according to Thorne Dreyer, her son and an editor of Space City!.

Thorne Dreyer shared these stories at an event on alternative media also featuring veteran writers Tom Curtis, Gabrielle Cosgriff, and Michael Berryhill. The Museum of Printing History hosted the panel discussion in conjunction with “Underground in H-Town,” an exhibition that highlights the importance of minority and alternative publications in local history.

Space City! was published from 1969 to 1972, a part of an international explosion of underground papers set off by the introduction of low-cost offset printing.

Houston in the 60s and 70s is never represented as a hotbed of dissent on par with San Francisco or New York. “The main thing about Houston was that it was all spread out,” Dreyer said in a similar talk at the Houston Zine Fest. “There was no Houston there, [only] community in bits and pieces everywhere. Houston is much more of a city now than it was then. What Space City! did was to help to identify all these pockets of progressive politics and kindred spirits, and pull them together into a cohesive spirit…a network of countercultural stuff.”

Gabrielle Cosgriff picked up the discussion where Dreyer left off. She partnered with Janice Blue to publish Breakthrough from 1976 to 1981. They named it after La Brecha, a book written by Mercedes Valdivieso, a Chilean feminist who taught literature at the University of Houston and Rice University. Cosgriff talked about Breakthrough’s support of Kathy Whitmire in her election to Houston city controller and mayor. The recent election of a lesbian mayor and a city council with an equal gender balance, she argued, can be traced back to efforts three decades earlier.

In its last year of publication, Breakthrough became a general-interest publication –“women’s issues are everybody’s issues” said Cosgriff — and named David Crossley as a co-editor. Crossley has gone on to lead Houston Tomorrow. Cosgriff serves on the editorial board of the Houston Chronicle.

The audience in the small auditorium included activist Gloria Rubac, writer David Theis, and many other notable people. Alternative media scholar and Rice Media Center staffer Tish Stringer recorded the discussion on video. There were some young people absorbing the history including Culturemap writer Steven Thomson and Emily Hall of PH Design.

Organized in partnership with the Houston Metropolitan Research Center, “Underground in H-Town” presents original documents and images from community papers and the alternative press from the second half of the twentieth century, with a special focus on the 1960s, 1970s, and 1980s. Papers presented in the exhibition include historic issues of Forward Times, Voice of Hope, Space City!, The Jewish Herald Voice, El Papel Chicano, El Sol De Houston, Houston Breakthrough, among others. It is worth a visit.

For more information, visit The Rag Blog post on the exhibit by Shane Patrick Boyle. The Rag Blog is edited by Thorne Dreyer. 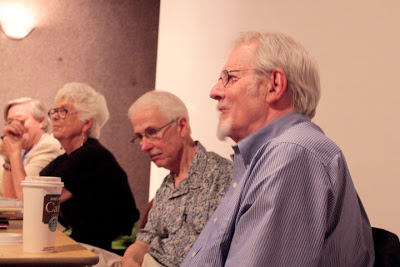 Special issue of Cite
Will focus on counterculture

In 1970, Charles Tapley’s architecture firm won a national award for convincing their client, Camille Waters, not to build anything on her site in the Texas Hill Country. The architects’ renderings portray a life camping out of a volkswagon. The upcoming issue of Cite: The Architecture and Design Review of Houston recovers this and other 1960s and 70s sites of counterculture.

This issue of Cite, like many in its 28-year archive at citemag.org , mixes high design with down and dirty civic engagement.

4 Responses to Houston Alternative Media : Telling It Like It Was