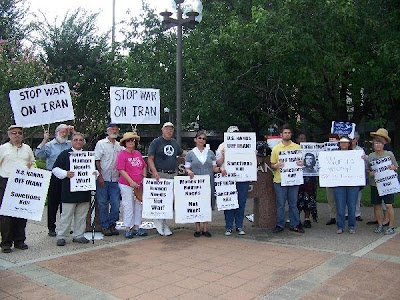 A diverse, multi-generational group demonstrated on August 1 in Houston to demand that the US and Israel halt any plans for a war on Iran. Photo by Gloria Rubac.
‘In our name, with our money, they are killing people across the world.’
By Gloria Rubac / August 4, 2008

The threat of a U.S./Israeli attack against Iran is growing – but so is grassroots opposition.

Over the weekend of August 1-3, thousands of people from coast to coast and around the world gathered to demand no new war on Iran. Activists in Houston gathered at the Mickey Leland Federal Building on August 1.

On June 12, the Stop War on Iran Campaign issued an emergency call to action for August 2. Response was overwhelming, and activists had actions in more than 87 cities, including Los Angeles, New York, Boston, and Washington DC, as well as in smaller towns and cities like Westbrook, Maine; Melbourne and Ocala, Fla.; Charlotte, N.C.; Bozeman, Mont.; Salt Lake City; Oklahoma City, and Tucson, Ariz. Organizers as far away as Hawaii mobilized to protest as an attack against Iran is threatened daily.

Protests also took place in Australia, China, France, Germany, Italy, Japan, Bangladesh and a number of countries in the Middle East. There were also actions in cities across Canada.

Houston activists representing many organizations spoke on an open microphone on August 1, during a protest at the Mickey Leland Federal Building, to denounce any plans to make war on Iran. “We have so many issues to fight right here at home. We don’t need to make war on Iran,” said Alma Diaz, co-host of KPFT Pacifica’s Proyecto Latino Americano. “Tomorrow morning we are going to confront the racist Border Watch at a job site and we urge you to join us.”

The Troops Out Now Coalition organized the Houston protest and about 40 people came out in the 100-degree sun for almost 2 hours, attracting the attention of federal employees as well as motorists passing by in the 5 o’clock traffic. They occupied both corners of the federal building on St. Joseph Parkway.

Reactions to signs that read, “Honk to Stop War” were received with continuous honking and with waving and peace signs from car windows. People walking to bus stops signed petitions for “No War on Iran” and took leaflets with information about the US’s latest threats in the Middle East.

A representative of the Council on American-Islamic Relations, Ali Khalili, spoke. “Enough is enough,” said Khalili. “In our name, with our money, they are killing people across the world.” Khalili also accused the administration of lying to gain support for the war in Iraq and says the White House is using the same tactic to convince the American public to support a war with Iran. “We waged war in Iraq. More than a million innocent men, women and children have died,” he adds.

Njeri Shakur, an anti-death penalty activist who gathered sheets of signatures on petitions opposing a war on Iran during the protest said, “Peoples’ lives are in a crisis with the rising gas prices, rising rents and food costs. It is so clear that even in Houston, Texas, home of former President George Bush, people are sick of war and want our tax money to be spent on the real needs of the people. “