How ACORN Took a Bite Out of Predatory Lending 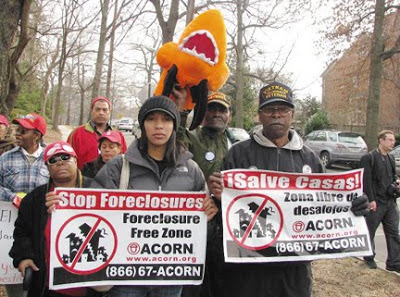 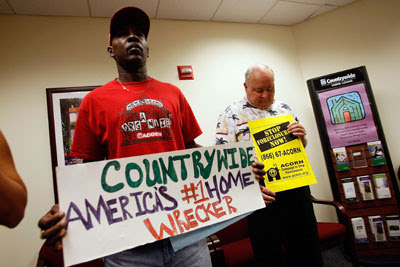 ACORN has organized low income people to fight predatory lending practices since the late 1990’s.
The ACORN I Know…

If someone told you that a bunch of low-income people, most of them African-American or Latino, most of them women, most of them elderly, had been victimized by a predatory mortgage lender that stripped them of much of their equity or of their entire homes, you might not be surprised.

But if I told you that these women and men had gotten together and, after three years of work, brought the nation’s largest high-cost lender to its knees, forced it to sell out to a foreign company, and won back a half a billion dollars of what had been taken from them — one of the largest consumer settlements ever — you’d probably ask me what country this had happened in.

Surely it couldn’t have been in the United States of the Second Gilded Age, the land of unbridled corporate power and radical government activism on behalf of the rich and the greedy.

Yet, it was. These victims identified a problem and named it “predatory lending” in the late 1990s. Their campaign to reform Household International (also known as Household Finance and as Beneficial) played out from 2001 to 2003, concluding with a settlement that includes a ban on badmouthing the company. That’s why more people haven’t heard about this.

The families who fought back and defeated Household are barred from bragging about it or teaching the lessons they learned, because that would require recounting the damage that Household did to homes and neighborhoods. These families are members of ACORN, the Association of Community Organizations for Reform Now.

I was ACORN’s communications coordinator during much of the Household campaign, but left before it ended. No one has asked me not to tell this story.

There have been gains in minority home ownership over the past few decades, in part as a result of the work by community groups like ACORN and National People’s Action to force banks to make loans in these communities, but the home ownership is fragile and not protected by additional savings. Lenders in the past decade have focused on stripping away equity and community groups have been forced to focus on keeping out loans that are worse than no loans at all.

Most high-cost loans are refinance loans. Too often they are marketed aggressively and deceptively, including through live-checks in the mail that result in very high-cost loans that the lender will be only too happy to refinance into a new mortgage. Often these loans are made with excessive, sometimes variable, interest rates, outrageously high fees, and fees financed into the loans so that the borrower pays interest on them and often is not told about them.

They are made with bogus products built in, on which the borrower also pays interest. Hidden balloon payments force repeated refinancings for additional fees each time. Mandatory arbitration clauses attempt to prevent borrowers from taking lenders to court. The practice of loaning more than the value of a home traps borrowers in loans they cannot refinance with a responsible lender. Consolidation of additional debts further decreases equity, placing the home at greater risk. Quiet omission of taxes and insurance from a mortgage that previously included those charges results in a crisis when yearly bills arrive.

Predatory lenders turn the usual logic of lending upside down. They make their money by intentionally making loans that the borrowers will be unable to repay. They charge fees for each refinancing until finally seizing the house. Fannie Mae has estimated that as many as half of all borrowers in subprime (high-cost) loans could have qualified for a lower cost mortgage.

ACORN members don’t take abuse of their neighborhoods lying down, and Household was a leading cause of the rows of vacant houses appearing in ACORN neighborhoods in the 1990s. ACORN launched a campaign to reform Household that included numerous strategies. One, an ACORN stand-by, was direct action. Repeatedly, ACORN members in numerous cities around the country simultaneously protested in Household offices to demand reform.

At the same time, ACORN was working to pass anti-predatory lending legislation in local and state governments and Congress. ACORN members made sure that in each case the victims testifying were victims of Household and that Household’s abuses were highlighted. When ACORN released major reports on predatory lending, the examples included were always from Household.

ACORN also worked with the Coalition for Responsible Wealth to advance a shareholder resolution that would have tied Household’s executives’ compensation to ending its predatory lending. In 2001 Household held its shareholders meeting in an out-of-the-way suburb of Tampa, Florida. A crowd of ACORN members was there with shark suits and shark balloons to protest.

The resolution won 5 percent. Over the next year, ACORN pressured state pension funds and other shareholders. Household held its 2002 meeting an hour and a half from the nearest airport in rural Kentucky. Members made the trip by car from all over the country. The protest may have been the biggest thing the town of London, Kentucky, had seen in years. The resolution won 30 percent.

As a result, various local and state governments threatened to divest from Household. ACORN also put pressure on stores like Best Buy that used Household credit cards. At the same time, ACORN Housing Corporation was assisting many Household victims in either refinancing out of their Household loans or at least canceling some of the rip-off services built into their loans, such as credit insurance. ACORN was also getting the word out to stay away from Household.

ACORN wrote up numerous accounts of Household predatory loans and took them to the attorney generals in state after state urging investigations. ACORN similarly pressured federal regulators to act. ACORN assisted borrowers in filing a number of class-action suits against Household targeting those of its practices that were clearly illegal even under existing law. They let Wall Street analysts know what Household stood to lose from these lawsuits, as well as from various reforms that Household periodically announced in its attempt to hold off the pressure.

But ACORN members never let up. They protested again and again at Household offices and held press conferences in front of homes about to be lost to Household. They protested the secondary market that was putting up capital for these predatory loans and they held a major protest at the trade group that lobbied in Washington for Household and its fellow sharks.

Then, in the summer of 2002, in the wealthy suburbs north of Chicago, victims of Household from around the country poured out of busses by the thousands onto the lawns of the board members and the CEO of Household. They knocked on doors and spoke to those who had hurt them from a distance. When the police made them leave, ACORN members plastered “Wanted” posters all over the neighborhood telling the board members’ neighbors what crimes the Household executives were guilty of.

Through all of this, we worked the media. I kept a database of victims’ stories and contact information and put them in touch with reporters whenever the reporters were willing to tell not just the victimization story but also the story of fighting back. We generated several hundred print articles and several hundred TV and radio stories about Household’s predatory lending practices.

A handful of ACORN staff people with great expertise and unrelenting effort organized thousands of members to drive this campaign until Household agreed to pay victims $489 million through the 50 states attorneys general, and later agreed to pay millions more through ACORN, as well as to reform its practices.

This campaign was an example of what can be done if enough different angles are pursued at once and the company ripping you off is put on the defensive and constantly hit with the unexpected. This campaign increased the size and power of ACORN to effect future progressive change. This is good news for low-income neighborhoods, but bad news for Wells Fargo, the predatory lender next on ACORN’s list.

[David Swanson was communications coordinator for ACORN from 2000 to 2003, and is the author of the new book Daybreak: Undoing the Imperial Presidency and Forming a More Perfect Union by Seven Stories Press. You can order it and find out when tour will be in your town:here. David Swanson was a founder of AfterDowningStreet.org, where this article also appears.]