Prisoner Tortured to Death in Arizona 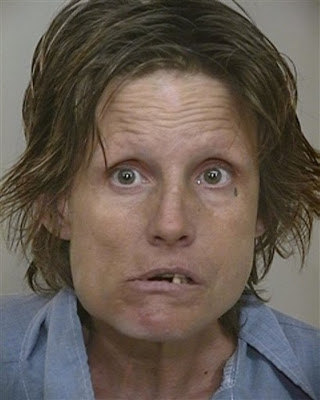 In this undated photo released by the Arizona Department of Corrections, Marcia Powell, 48, is seen. Powell died Wednesday, May 19, 2009 at a hospital after spending four hours in a holding cell the day before at Arizona State Prison Complex-Perryville in Goodyear, Ariz. Department of Corrections officials did not immediately explain why Powell was placed in the holding cell. Photo: AP.
Details emerge in inmate’s heat-related death: Report describes miscommunications, policy violations
By Casey Newton / September 24, 2009

Disturbing new details emerged Wednesday in the death of Marcia Powell, an Arizona state prison inmate who died of heat-related causes after being left in an outdoor cage for hours.

The Arizona Department of Corrections’ internal investigation of Powell’s death on May 20 runs about 3,000 pages. The department announced this week that it has disciplined 16 people in connection with the incident, with five employees fired or forced to resign. A criminal investigation is ongoing.

Interviews with prison staff members, inmates and medical personnel illustrate how a series of policy violations and miscommunications led to Powell’s collapse at Arizona State Prison Complex-Perryville in Goodyear. She later died at West Valley Hospital.

Among the report’s findings:

Powell, who was serving a sentence for prostitution, said she felt suicidal at 11 a.m. on May 19 and was escorted to the outdoor cage to await transportation for psychiatric care at the prison complex detention unit.

Officers seeking to move Powell to the unit were first told that it did not have available beds. Later, another inmate in the unit refused to put handcuffs on to be taken back to her cell, causing the staff to trigger its incident command system. The incident took more than 90 minutes to resolve, during which time no other inmates were brought into the unit.

Officers monitoring Powell were wary of asking psychiatric-unit staffers to accept another inmate during the standoff, even though three beds had become available. But investigators said it would have been possible to transfer Powell, since the uncooperative inmate was locked in a secure cell.

Prison policy calls for inmates to be kept in outdoor cells for a maximum of two hours. The cells had no shade, and on the day Powell died, temperatures hit 107.5 degrees.

Officers did not properly log Powell’s time in the outdoor cell or when they checked on her. When she collapsed, no one could say for certain how long she had been there.

Doctors on the scene said Powell’s body temperature was at least 108 degrees but may have been higher, since their thermometers topped out at 108.

The most bitterly disputed aspect of the case concerns whether Powell was denied water.

Nearly all of the inmates interviewed by investigators reported that Powell screamed out for water regularly but was repeatedly denied. Others said she was granted water only once or twice in nearly four hours.

“I need some water – just a drop,” one inmate overheard Powell tell a corrections officer, who reportedly ignored her.

Another inmate reported that a corrections officer mockingly repeated Powell’s requests for water back to her, without giving her any.

All of the corrections officers interviewed for the report said Powell had been given water throughout her outdoor confinement.

Both inmates and staff members said Powell’s history of mental illness and frequent erratic behavior meant that some of her requests were not taken seriously. She did not get the staff’s undivided attention until she collapsed at 2:40 p.m.

Timothy Johnson, a physician’s assistant who attempted to revive Powell, swore repeatedly at investigators when asked about Powell’s death.

“This should not have happened,” he said.

Thanks to Peggy Plews / The Rag Blog

This entry was posted in RagBlog and tagged Arizona, Prison Conditions, Prisoner Abuse. Bookmark the permalink.

3 Responses to Prisoner Tortured to Death in Arizona