How Many Did You Kill? 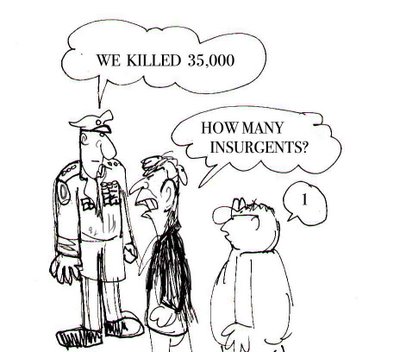 CAMP PENDLETON, Calif. (Oct. 7) – A Navy corpsman testified Friday that Marines in his patrol seized an Iraqi civilian from his home, threw him into a hole and put at least 10 bullets in his head and chest after growing frustrated in their search for an insurgent.

Petty Officer 3rd Class Melson J. Bacos said he saw a Marine put fingerprints from the victim onto a rifle and on a shovel to implicate him as an insurgent.

“I was shocked and I felt sick to my stomach,” Bacos said.

Bacos, a medic who had been on patrol with the squad, was charged along with seven Marines in the slaying of Hashim Ibrahim Awad last spring in the town of Hamdania. But Bacos struck a deal with prosecutors under which he pleaded guilty to kidnapping and conspiracy and agreed to testify Friday at his court-martial about what he saw.

“I knew what we were doing was wrong,” Bacos testified, speaking nearly in a whisper. “I tried to say something and then I decided to look away.”

Bacos said he asked the Marines to let Awad go, but Cpl. Marshall L. Magincalda told him in crude terms that he was being weak and should stop protesting.