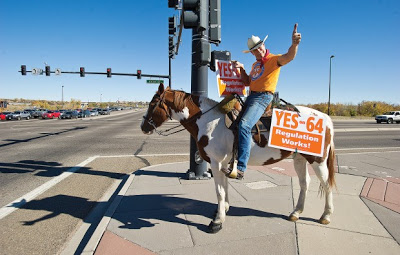 Howard Wooldridge and Misty in Pueblo, Colorado. Image from The Pueblo Chieftain.
Misty and me:
Fighting pot prohibition in Colorado, Part II

Howard Wooldridge was Thorne Dreyer’s guest on Rag Radio, produced in the studios of KOOP 91.7-FM in Austin, Texas, on Friday, November 30, 2012. You can listen to the podcast here:

Howard “Cowboy” Wooldridge, the founder and director of Citizens Opposing Prohibition (COP), is a Texan since 1994 and a former Michigan police officer and detective. His experience in law enforcement taught him that arresting people for drug use is a faulty proposition: it doesn’t work and is a waste of police resources.

Wooldridge has become one of the most effective advocates in Washington, D.C., for ending marijuana prohibition and the “war on drugs.” Howard — with his horse (and “partner in politics”) Misty — took part in the successful Colorado campaign in support of Amendment 64, to legalize cannabis for recreational and industrial purposes there.

This is the second in a three-part series written for The Rag Blog.

I used the local McDonald’s railing in Sterling as a hitching post, tying Misty up while I went inside to buy lunch. A crowd had already gathered when I returned a few minutes later.

We were a combination “petting zoo” and political statement, as everyone took pictures of their kids with Misty. Her “64” signs would show up along with my t-shirt all over social media in the Sterling area. One guy boasted of having 3,000 Facebook friends and said he would make multiple posts.

Yes, adults were nearly as eager to have a picture of the horse as the kids. By the end of this Saturday, Misty and I were both approaching exhaustion. She was actually falling asleep on the corner. We took the next day off. I took Misty to a large park and let her roam loose for several hours.

On the 22nd of October we started our long march down the I-25 corridor, spending our day in Longmont. The gods of weather smiled upon us again with sunshine and high 60s. A reporter spent nearly an hour with us, asking almost as many questions about riding across America as our efforts for Amendment 64. The drivers and passengers gave us hundreds of honks, thumbs, and smiles, while the cell phone cameras kept taking our pictures.

I strongly believe we helped fire up the base to vote, even as we confounded the stereotype that only “stoners” were voting “yes.” The COP t-shirt and large pistol on my hip certainly set me apart from many. Note: My wife Karen insisted I take and wear the gun in case the Cartels tried to shoot me. Am I a lucky guy or what?!

Misty caught a break that night, sleeping in a paddock with two llamas. Bo and Betsy Shaffer of Erie put us up the next three nights, as we worked in Loveland. Bo had given us shelter in 2005 during our second ride across America. Nothing like a home-cooked meal and good conversation.

The enthusiasm for 64 exceeded that we received in our sojourn across California in 2010. The polls reflected us holding steady at 51% and, as we entered our last two weeks, I believed our efforts were helping the numbers. According to the election experts, turning out your supporters is crucial to any win. And Misty made people smile, even if they disagreed with the signs on her side.

The Front Range received 4-6 inches of snow on Wednesday evening, which meant Thursday was a snow day. I would never trailer Misty in snow. I took advantage of the off-day to visit my brother in the Denver area, had dinner with my ‘”librarian” Karen Bary and ended our day off doing a radio show in south Denver.

Colorado Springs in El Paso County — which is home to many mega-churches — was my last challenge. Bob Wiley not only arranged for a stall for Misty, he and his wife Rita put me in their guest bedroom, making our stay like heaven. Misty was able to take a load off. Sleeping on the ground left her markedly more rested and alert during her work time. The Wileys’ good food, drink, and conversation improved my morale, just as the grind of work and being on the road were wearing me down.

We worked a bit of the traffic going to the Air Force Academy football game, before the police forced us to leave… The officer told us he was voting for 64, which tells you how pleasant the whole thing went. In the next 10 days we worked every day at different intersections. On Saturday the local ABC TV station did a nice report on us. A few days later we made a side trip to the police station where a local medical cannabis patient was supposed to receive his five pounds and 60 plants back (he had been found not guilty). This resulted in me being quoted in the local daily paper.

Again the honks and smiles seemed to increase. People rolled down their windows to shout they had already voted YES on 64.

On Saturday, November 1, we worked the crowd going to the Romney rally at the Colorado Springs airport. The traffic was only averaging about two MPH into the parking lot area, so everyone saw the signs for a solid minute. Some of the Republicans were angry and abusive but overall the crowd seemed about 50-50. It was another good day in the saddle. Fire the base and confront the opposition is my strategy.

We made a two-day, 60 mile trip down to Pueblo to work their mall intersection. Again the media gods smiled on us, as we made the local paper, including a nice big picture. Mall security was an off-duty cop who was a bit nasty ordering me to leave his parking lot. Luckily across the street the Goodwill folks said we could park there.

Though tired, we decided to work Sunday in Colorado Springs. And it was lucky that we did. An off-duty Fox reporter saw us and said, “There is a story.” We made the local Fox news that night. Better, Fox national picked it up and we aired on all Fox channels on the Monday before the election, as the report went national.

After four more hours in Castle Rock on Monday, I bought a last, five-pound bag of carrots for Misty and pointed us home, our work done. Though invited to the victory party in Denver, attending would have meant a delay of 36 hours before being with my long-suffering Karen.

Near midnight on Tuesday, as we rolled into the Motel 6 in Indianapolis, I got the call from Bob that we had won with about 53% (the final total was 55%). I nearly cried with joy, knowing this was the beginning of the end of our national nightmare of marijuana prohibition. Late the next day we arrived at the ranch where Misty joined the herd of 50 on 80 acres. Later I learned that El Paso County voted in favor of Proposition 64 by a margin of 10 votes. Congratulations all around!

Ode to Misty: In August she thought, “Uh-ohh. Howard has ridden me three times this week. We are going someplace.” And with that realization, Misty had to prepare herself, mentally and physically, for yet another long ride in the trailer and upon arrival, to stand nearly motionless on one busy street corner after another. She knew that foul-smelling diesel smoke would mix with gasoline fumes to make her days less than pleasant. She knew she would be spending all night in her tight little trailer while Howard slept at the motel. Misery was spelled: “Howard-on-the-road-for-politics.”

Misty has carried the anti-prohibition message on her back since 2001. She carried my little butt across America twice, while I wore the COP T-shirt. She spent two months in California for Proposition 19; now one month for Amendment 64. Through it all she did not complain, act up, or be anything other than my magnificent, Texas horse and partner. Her good looks made her a TV star and allowed our message to be seen my millions.

She has done enough. I will ask no more of my Misty. She is retired from politics. I let her know this as I turned her out into the paddock back in Maryland.