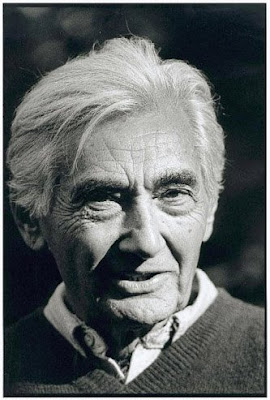 Howard Zinn
Elections matter, when backed by the power of the people
By Howard Zinn

[This article first appeared in the March, 2008, issue of The Progressive. Must say, Zinn’s perspective is worth paying attention to. We do go a bit bananas. — .td / The Rag Blog]

There’s a man in Florida who has been writing to me for years (ten pages, handwritten) though I’ve never met him. He tells me the kinds of jobs he has held—security guard, repairman, etc. He has worked all kinds of shifts, night and day, to barely keep his family going. His letters to me have always been angry, railing against our capitalist system for its failure to assure “life, liberty, the pursuit of happiness” for working people.

Just today, a letter came. To my relief it was not handwritten because he is now using e-mail:

Well, I’m writing to you today because there is a wretched situation in this country that I cannot abide and must say something about. I am so enraged about this mortgage crisis. That the majority of Americans must live their lives in perpetual debt, and so many are sinking beneath the load, has me so steamed. Damn, that makes me so mad, I can’t tell you. . . . I did a security guard job today that involved watching over a house that had been foreclosed on and was up for auction.

They held an open house, and I was there to watch over the place during this event. There were three of the guards doing the same thing in three other homes in this same community. I was sitting there during the quiet moments and wondering about who those people were who had been evicted and where they were now.

On the same day I received this letter, there was a front-page story in the Boston Globe, with the headline “Thousands in Mass. Foreclosed on in ’07.”

A few nights before, CBS television reported that 750,000 people with disabilities have been waiting for years for their Social Security benefits because the system is underfunded and there are not enough personnel to handle all the requests, even desperate ones.

Stories like these may be reported in the media, but they are gone in a flash. What’s not gone, what occupies the press day after day, impossible to ignore, is the election frenzy.

This seizes the country every four years because we have all been brought up to believe that voting is crucial in determining our destiny, that the most important act a citizen can engage in is to go to the polls and choose one of the two mediocrities who have already been chosen for us. It is a multiple choice test so narrow, so specious, that no self-respecting teacher would give it to students.

And sad to say, the Presidential contest has mesmerized liberals and radicals alike. We are all vulnerable.

Is it possible to get together with friends these days and avoid the subject of the Presidential elections?

The very people who should know better, having criticized the hold of the media on the national mind, find themselves transfixed by the press, glued to the television set, as the candidates preen and smile and bring forth a shower of clichés with a solemnity appropriate for epic poetry.

Even in the so-called left periodicals, we must admit there is an exorbitant amount of attention given to minutely examining the major candidates. An occasional bone is thrown to the minor candidates, though everyone knows our marvelous democratic political system won’t allow them in.

No, I’m not taking some ultra-left position that elections are totally insignificant, and that we should refuse to vote to preserve our moral purity. Yes, there are candidates who are somewhat better than others, and at certain times of national crisis (the Thirties, for instance, or right now) where even a slight difference between the two parties may be a matter of life and death.

I’m talking about a sense of proportion that gets lost in the election madness. Would I support one candidate against another? Yes, for two minutes—the amount of time it takes to pull the lever down in the voting booth.

But before and after those two minutes, our time, our energy, should be spent in educating, agitating, organizing our fellow citizens in the workplace, in the neighborhood, in the schools. Our objective should be to build, painstakingly, patiently but energetically, a movement that, when it reaches a certain critical mass, would shake whoever is in the White House, in Congress, into changing national policy on matters of war and social justice.

Let’s remember that even when there is a “better” candidate (yes, better Roosevelt than Hoover, better anyone than George Bush), that difference will not mean anything unless the power of the people asserts itself in ways that the occupant of the White House will find it dangerous to ignore.

The unprecedented policies of the New Deal—Social Security, unemployment insurance, job creation, minimum wage, subsidized housing—were not simply the result of FDR’s progressivism. The Roosevelt Administration, coming into office, faced a nation in turmoil. The last year of the Hoover Administration had experienced the rebellion of the Bonus Army—thousands of veterans of the First World War descending on Washington to demand help from Congress as their families were going hungry. There were disturbances of the unemployed in Detroit, Chicago, Boston, New York, Seattle.

In 1934, early in the Roosevelt Presidency, strikes broke out all over the country, including a general strike in Minneapolis, a general strike in San Francisco, hundreds of thousands on strike in the textile mills of the South. Unemployed councils formed all over the country. Desperate people were taking action on their own, defying the police to put back the furniture of evicted tenants, and creating self-help organizations with hundreds of thousands of members.

Without a national crisis—economic destitution and rebellion—it is not likely the Roosevelt Administration would have instituted the bold reforms that it did.

This entry was posted in RagBlog and tagged Economy, Presidential Campaign, The Left. Bookmark the permalink.