Hugo Chavez: Accomplishments of a Rebel 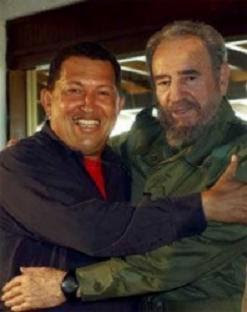 Venezuela’s President Hugo Chavez remains the world’s leading secular, democratically elected political leader who has consistently and publicly opposed imperialist wars in the Middle East, attacked extra-territorial intervention and US and European Union complicity in kidnapping and torture. Venezuela plays the major role in sharply reducing the price of oil for the poorest countries in the Caribbean region and Central America, thus substantially aiding them in their balance of payments, without attaching any ‘strings’ to this vital assistance. Venezuela has been in the forefront in supporting free elections and opposing human right abuses in the Middle East, Latin America and South Asia by pro-US client regimes in Iraq, Afghanistan and Colombia. No other country in the Americas has done more to break down the racial barriers to social mobility and the acquisition of land for Afro-Latin and Indio Americans. President Chavez has been on the cutting edge of efforts toward greater Latin American integration – despite opposition from the United States and several regional regimes, who have opted for bilateral free trade agreements with the US.

Even more significant, President Chavez is the only elected president to reverse a US backed military coup (in 48 hours) and defeat a (US-backed) bosses’ lockout, and return the economy to double-digit growth over the subsequent 4 years.1 President Chavez is the only elected leader in the history of Latin America to successfully win eleven straight electoral contests against US-financed political parties and almost the entire private mass media over a nine-year period. Finally President Chavez is the only leader in the last half-century who came within 1% of having a popular referendum for a ‘socialist transformation’ approved, a particularly surprising result in a country in which less than 30% of the work force is made up of peasants and factory workers.

President Chavez has drastically reduced long-term poverty faster than any regime in the region,2 demonstrating that a nationalist-welfare regime is much more effective in ending endemic social ills than its neo-liberal counterparts. A rigorous, empirical study of the socio-economic performance of the Chavez government demonstrates its success in a whole series of indicators after the defeat of the counter-revolutionary coup and lockout and after the nationalization of petroleum (2003).

GDP has grown by more than 87% with only a small part of the growth being in oil. The poverty rate has been cut in half (from 54% in 2003 at the height of the bosses’ lockout to 27% in 2007; and extreme poverty has been reduced from 43% in 1996 to 9% in 2007), and unemployment by more than half (from 17% in 1998 to 7% in 2007). The economy has created jobs at a rate nearly three times that of the United States during its most recent economic expansion. Accessible health care for the poor has been successfully expanded with the number of primary care physicians in the public sector increasing from 1,628 in 1998 to 19,571 by early 2007. About 40% of the population now has access to subsidized food. Access to education, especially higher education, has also been greatly expanded for poor families. Real (inflation adjusted) social spending per person has increased by more than 300%. 3

His policies have once and for all refuted the notion that the competitive demands of ‘globalization’ (deep and extensive insertion in the world market) are incompatible with large-scale social welfare policies. Chavez has demonstrated that links to the world market are compatible with the construction of a more developed welfare state under a popularly-based government.

The large-scale, long-term practical accomplishments of the Chavez government, however have been overlooked by liberal and social democratic academics in Venezuela and their colleagues in the US and Europe, who prefer to criticize secondary institutional and policy weaknesses, failing to take into account the world-historic significance of the changes taking place in the context of a hostile, aggressively militarist-driven empire.4

No reasonable and rigorous contemporary analysis can seriously provide an accurate assessment of Venezuela while glossing over the tremendous accomplishments achieved during the Hugo Chavez presidency.

It is within the framework of Chavez’ innovative and courageous political-social breakthroughs that we should proceed to an analysis of the advances, contradictions and negative aspects of specific political, economic, social and cultural policies, practices and institutions.

Read all of it here. / Information Clearing House