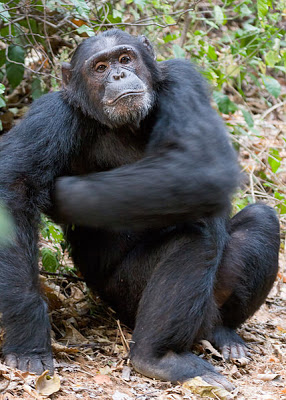 Chimps and humans are a lot alike, except that humans, being more intelligent, do what chimps do even better.

Last time I made some remarks about chimps and bonobos. That’s because if you want to master your life, it helps to know your material. Think of yourself as an artist or a designer or a builder whose goal is to make of your life something both highly functional and aesthetically pleasing. You need to know what you have to work with.

The biological order Primates is a rather large one, comprising lemurs, monkeys and apes as well as humans. Within it humans, chimpanzees, and bonobos are all members of the family Hominidae, subfamily Homininae. (The word means, somewhat unhelpfully, human-like.)

Since neither can swim, the river seems to have served as a barrier that enabled the bonobo to evolve into a separate species. Or perhaps it is chimps and humans that evolved away from the ancient species from which all three are descended, and bonobos, having stayed in the ancestral habitat, are closest to that ancient precursor.

In any case, the bonobo habitat seems like a primeval paradise: a pleasant forest environment with lots of food in which the inhabitants find congenial sociality. The chimp habitat, by contrast, is outside the gates of Eden; those who live there have to work much harder for their sustenance.

Chimps, bonobos, and humans exhibit many similarities. All are social and inquisitive; all use tools; all exhibit cooperation, empathy, and altruism (helping others at some cost to oneself) within their groups. There are many significant differences as well. The most obvious is that humans are far more intelligent and exhibit a much broader range of behavior than the others. The most notorious difference between chimps and bonobos is that chimps are patriarchal, violent, and aggressive, and bonobos are matriarchal, peaceful, and sexual.

Chimps have the reputation of being “killer apes.” Their society is extremely hierarchical, with much jockeying among males for the top position, and frequent scuffles, a few quite bloody, among them. Political machinations are incessant because high rank provides sexual mates and food for males; females forage for themselves but sometimes trade sex for food. The dominance hierarchy is male. Female chimps form networks of affiliative friendships.(2)

Conflicts among males are solved through violence and aggression. The hair of a male chimp stands on end at the slightest provocation. He will pick up a stick and challenge anyone perceived as weaker. Chimps in the wild are highly territorial. Chimp males patrol their borders and murder intruders from other bands. Bands of males engage in lethal aggression against their neighbors. Brutal violence is part of the chimp’s natural makeup.

Interestingly, shrewd skill at social manipulation is also part of the chimp’s natural makeup. Frans de Waal’s classic Chimpanzee Politics relates a tale worthy of a Machiavelli. Old Yeroen, the alpha male, is deposed over the course of several months by the younger Luit. Luit engages in battle with Yeroen several times and eventually wins, but his victory is due as much to his campaigning and currying favor among the rest of the tribe, particularly the females, as to his physical prowess.

Yeroen is defeated, but allies himself with Nikkie, another youngster on his way up. Eventually Nikkie, backed by Yeroen, deposes Luit, again not through physical combat alone but by gaining the support of others as well. Luit reigns supreme. But Yeroen gets more sex than either of the other two!(3) “It was almost impossible,” says de Waal, “not to think of Yeroen as the brain and Nikkie as the brawn of the coalition between them.”(4)

Chimps exhibit gentleness, play, and cooperation among the in-group, but in-group conflicts are resolved through domination. Sometimes a dominant male will step in and break up a fight, and sometimes a dominant female or group of females will; in all cases, it is a matter of threatening violence.

After a fight, however, the parties reconcile with each other, by hugging, kissing and grooming. Reconciliation is as important as conflict, because without it the group would disband. Like humans, chimps require group living for survival; and like most mammals, they are soothed by physical touch.

Sexual contact is sporadic among chimps, because it happens only when the female is in heat and her genitals swell visibly. Dominant males get to mate far more often than subordinates, and the male will sometimes kill infants which are clearly not his offspring, for instance when taking in a female from a different tribe. Once the infants are born, the male spends little time and energy nurturing them; chimps show low male parental investment.

We humans tend to think of ourselves as special, but chimps have some decidedly human-like capabilities: empathy and theory of mind. By “empathy” I mean the ability to be affected by the emotional state of another individual. “Theory of mind” refers to the ability to recognize the mental states of others. It means that one individual has an idea, a theory, about what another individual believes, perceives or intends to accomplish. In order to do that, of course, the individual has to have some sense of himself or herself as a separate entity.

Chimps have all these traits. They console others in distress; they know what others know and can take another’s viewpoint; they recognize themselves in a mirror; and they give aid tailored to another’s needs, a behavior called “targeted helping,” which requires a distinction between self and other, a recognition of the other’s need, and sympathy for the other’s distress.

Here is an example: In the Arnhem zoo the keepers had hosed out all the rubber tires in the enclosure and left them hanging on a horizontal pole. When the apes were released into the enclosure one of them, Krom, tried to get a tire that still had some water in it, but it was several tires back and was blocked by the ones hanging in front of it. She could not figure out how to get to it.

After Krom gave up, Jakie, an adolescent whom Krom had cared for as an infant, came up and pushed the tires off the pole one by one. When he reached the one with water in it, he carefully removed it so no water was spilled and carried it to his “auntie” and placed it upright in front of her so she could reach in and get the water. Clearly, he knew what she wanted and came to her aid.(5)

Chimps have a primitive sense of time. They are focused on the present, but can remember past grievances and favors and avenge the former and reward the latter. They are able to anticipate the future and make plans as well. For instance:

“An adult male may spend minutes searching for the heaviest stone on his side of the island, far away from the rest of the group… He then carries the stone he has selected to the island’s other side, where he begins —  with all his hair on end — an intimidation display in front of his rival. Since stones serve as weapons (chimpanzees throw fairly accurately), we may assume that the male knew all along that he was going to challenge the other. This is the impression chimpanzees give in almost everything they do: they are thinking beings just as we are.”(6)

Given this picture, it seems that chimps and humans are a lot alike, except that humans, being more intelligent, do what chimps do even better. We can plan farther into the future and remember and document a greater range of the past. We have a much more ample capacity to understand what others are thinking and feeling and to understand ourselves. And, of course, we have much greater language abilities as well, giving us the ability to learn through history and culture. We have much better tools. And we can use them to kill each other much more effectively.

Some say that we are fundamentally aggressive and warlike, just like chimps, and the reason we have not killed each other off is that we have somehow managed to acquire a veneer of morality that holds these primitive urges in check.(7) That would seem plausible if all we knew about our genetic relatives were the chimps. But chimps are not the whole story. We are genetically related to bonobos as well.

(1) Hare, p. 92.
(2) de Waal, Peacemaking Among Primates, p. 51.
(3) de Waal, Chimpanzee Politics, p. 164. de Waal backs his conclusions with an impressive amount of observational data. He and his team recorded every instance of each type of interaction — submissive greeting, dominance display, fighting, reconciling, grooming, entreating, copulating, and more — among more than 20 apes over five years, and then correlated the data on computers. He graphs the relative percentage of submissive greetings, of mating activity, and of group support among the various males and the data clearly show that during the first year of Luit’s reign, Yeroen got as much sex as the other two combined.
(4) de Waal, Chimpanzee Politics, p. 141.
(5) de Waal, Primates and Philosophers, p. 33.
(6) de Waal, Peacemaking Among Primates, pp 38-39.
(7) de Waal, Primates and Philosophers, pp. 7-12.