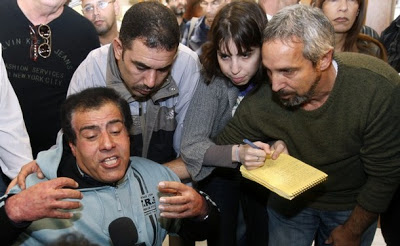 Izz el-Deen Aboul Aish, a Palestinian doctor who worked in Israel, speaks to the media in Tel Hashomer hospital near Tel Aviv, Jan. 17, 2009. Dr. Aish’s children were killed in an Israeli attack in the Gaza Strip. Photo by Reuters.

The trend within Israeli society is toward more extreme positions and greater anti-Arab racism. This most recent Israeli onslaught against the Palestinians in Gaza was accompanied by the arrest of hundreds of Israel’s Arab citizens for peacefully protesting.

With its recent invasion of Gaza, Israel has irreparably damaged its moral standing worldwide, especially among the intelligentsia, human rights activists, and perhaps most importantly within the US and European Jewish communities. A most graphic example of the latter is our progressive Jewish friend who organized several peace camps in New Mexico for Israeli and Palestinian girls. A TV documentary made about them was shown on 60 Minutes.

One of the most prominent Palestinian girls in the documentary was the daughter of a Palestinian doctor, Dr. Aboul Aish, a moderate man from Gaza who practiced in Israel. She was killed by tank fire into her home, along with both her sisters, all the doctor’s children, during the most recent Israeli massacre of Palestinians. Our friend was depressed beforehand due to the lack of effect the camps had once the girls returned to the Middle East. Now she is in anguish, her faith in Israel shattered. She leaves soon for Gaza to film a post-mortem interview with the Dr. Aboul Aish.

Since the Gaza invasion, there have been an unprecedented number of articles condemning Israel’s actions in the English language press. Especially in Europe, there is growing support for the prosecution of Israeli leaders for war crimes. The left blogosphere in the US is now completely dominated by writers critical of Israel. As they were in relation to the Iraq War, these are increasingly the opinion leaders who will eventually influence main stream thought.

The trend within Israeli society is toward more extreme positions and greater anti-Arab racism. This most recent Israeli onslaught against the Palestinians in Gaza was accompanied by the arrest of hundreds of Israel’s Arab citizens for peacefully protesting. Israeli government officials have denounced them as traitors and many remain in detention. 94% of the Jewish population of Israel supported the Gaza invasion.

Next month, the Israelis will elect a new government. According to pre-election polls, this election will be won by Benjamin Netanyahu of the right wing and bellicose Likud Party in partnership with “hate-mongering Yisrael Beytenu party headed by the xenophobic Avigdor Lieberman.” They conspicuously have no interest in negotiating peace and will openly expand Jewish settlements on the West Bank. Liebermanadvocates depriving Arabs of Israeli citizenship.

Of course, Israel’s actions in Gaza and those that are predictable after the upcoming election will spawn a new generation of jihadists throughout the Arab world. But the principal result will be the increasing political isolation of Israel. For the first time since 1948, their detractors will dominate the debate, even in the US and Europe.

President Obama will eventually be forced to break with Israel. In his first week in office, he gave an exclusive interview to Al Arabiya on the situation in the Middle East, his first interview with an international news agency. He named George Mitchell, praised for his even handedness even by Chomsky, his special envoy to the Middle East. He will maintain that “the security of Israel is our paramount concern,” but he will eventually decide that Israel’s own actions compromise that security. More importantly, he will correctly conclude that Israeli aggression compromises the security of the US as well.

I believe Obama wants peace in Israel/Palestine. And as a pragmatist, he also wants solutions, not protracted stalemate. The Israeli leadership and, sadly, most of Israel’s Jewish population do not. An increasing number of them are, furthermore, blatant racists. Obama will not be blind to this fact.

Israel acquired its lands by ethnic cleansing. They have utterly no intention of giving up their ill-gotten gains. Any conceivable peace treaty would require them to do so. They are, and will remain, intransigently unwilling to accept the compromises necessary to bring peace. This rejection of “land for peace” on the part of Israelis will inevitably lead to further violent conflicts. Hence, there is a contradiction between the actions taken by Israel and the security of the US that will force Obama to adopt some form of opposition stance. The likely tangible manifestation of this break will be a US abstention (instead of a veto) on a future resolution condemning Israel in the UN Security Council. Eventually, this contradiction will result in Obama declaring that the aggressive use of US supplied military hardware to Israel is illegal under the terms under which it was provided (for defense only), and some military aid will be curtailed. Although this may limit Israel, they will not be fully deterred.

A growing chorus in the West demanding justice for Palestinians will reinforce this process. As in the case of the movement against South Africa’s apartheid regime, boycotts of all things Israeli are likely to become widespread. We should also clamor for the international prosecutions of Israeli leadership for war crimes. All this and more will be necessary to force Israel to accept a just peace. Israel must stand alone, isolated, shunned and condemned, if it is to ever abandon its oppressive occupation and opposition to a Palestinian state. It will never do so voluntarily, so there is no other option.

Given the enormous contributions to all our lives made by our Jewish brothers and sisters and the suffering their ancestors have endured, this will be an agonizing process. Ideally, Jews will join Palestinians in the leadership of this movement. In that role, they would be a model for reconciliation.