Austin : Watch Out for Zombies 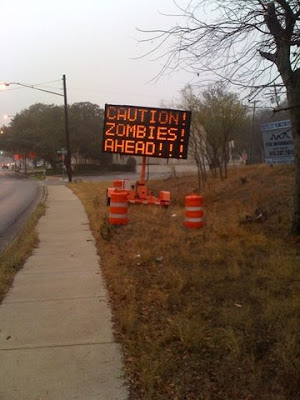 AUSTIN — Austin drivers making their morning commute were in for a surprise when two road signs on a busy stretch of road were taken over by hackers. The signs near the intersection of Lamar and Martin Luther King boulevards usually warn drivers about upcoming construction, but Monday morning they warned of “zombies ahead.”

“I thought it was pretty funny,” said University of Texas sophomore Jane Shin, who saw the signs while driving down Lamar Bouelvard with friends Sunday night. “We wondered who did it.”

“Even though this may seem amusing to a lot of people, this is really serious, and it is a crime,” said Austin Public Works spokesperson Sara Hartley. “And you can be indicted for it, and we want to make sure our traffic on the roadways stays safe.”

Hartley said though it was a locked sign, the padlock for it was cut. Signs such as these have a computer inside that is password-protected.

“And so they had to break in and hack into the computer to do it, so they were pretty determined,” said Hartley.

This crime is a class C misdemeanor in Texas, and Hartley said it endangers the public.

“The big problem is public safety,” said Hartley. “Those signs are out there to help our traffic on the roadway to stay safe and to know what’s coming up.”

KXAN Austin News cameras caught many drivers slowing down to read the signs as they approached. Some read, “Zombies ahead! Run for your lives!”

Hartley said the city will discuss more secure safety measures with the manufacturer of the signs.

Speculation among the tech-savvy on the Internet is that the signs were inspired by the video game Call of Duty 5, World at War, which is the top game in the country right now and features “nazi zombies,” or an upcoming movie about zombies called “Dead Snow” (an official selection at Sundance ’09). There are also several online sites that teach people how to break into these construction signs.

This entry was posted in RagBlog and tagged Austin, Hackers. Bookmark the permalink.