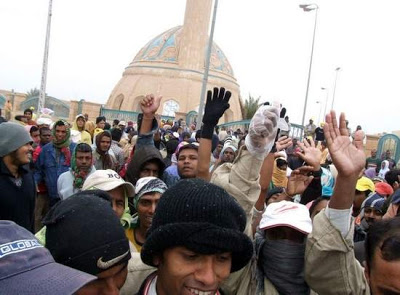 About a thousand men living in warehouses near the Baghdad airport marched out of their compound today to protest what they call broken promises from Najlaa, a Kuwaiti catering company that had offered them jobs in Iraq. Instead, Najlaa’s contracts didn’t work out as expected and the company kept the men in the compound. photo by Adam Aston / Modesto Bee / MCI

‘They promised us the moon and stars,’ said Davidson Peters, 42, a Sri Lankan. ‘While we are here, wives have left their husbands and children have been shut out of their schools’ because money for the families has dried up. The men live in three warehouses with long rows of bunk beds crammed tightly together.

BAGHDAD — About 1,000 Asian men who were hired by a Kuwaiti subcontractor to the U.S. military have been confined for as long as three months in windowless warehouses near the Baghdad airport without money or a place to work.

Najlaa International Catering Services, a subcontractor to KBR, an engineering, construction and services company, hired the men, who’re from India, Nepal, Sri Lanka and Bangladesh. On Tuesday, they staged a march outside their compound to protest their living conditions.

“It’s really dirty,” a Sri Lankan man told McClatchy, speaking on the condition of anonymity because he still wants to work for Najlaa. “For all of us, there are about 12 toilets and about 10 bathrooms. The food — it’s three half-liter (one pint) bottles of water a day. Bread, cheese and jam for breakfast. Lunch is a small piece of meat, potato and rice. Dinner is rice and dal, but it’s not dal,” he said, referring to the Indian lentil dish.

After McClatchy began asking questions about the men on Tuesday, the Kuwaiti contractor announced that it would return them to their home countries and pay them back salaries. Najlaa officials contended that they’ve cared for the men’s basic needs while the company has tried to find them jobs in Iraq.

The laborers said they paid middlemen more than $2,000 to get to Iraq for jobs that they were told would earn them $600 to $800 a month. Some of the men took out loans to cover the fees.

“They promised us the moon and stars,” said Davidson Peters, 42, a Sri Lankan. “While we are here, wives have left their husbands and children have been shut out of their schools” because money for the families has dried up. The men live in three warehouses with long rows of bunk beds crammed tightly together. Reporters who tried to get a better glimpse inside were ushered away by armed guards.

The conditions in which the men have been held appear to violate guidelines the U.S. military handed down in 2006 that urged contractors to deter human trafficking to the war zone by shunning recruiters that charged excessive fees. The guidelines also defined “minimum acceptable” living spaces — 50 square feet per person — and required companies to fulfill the pledges they made to employees in contracts.

A U.S. military spokesman for the Multi-National Force-Iraq referred questions to KBR, a Texas-based former subsidiary of Halliburton. The spokesman said that the American military wasn’t aware of the warehouses until McClatchy and the Times of London began asking questions about it on Monday.

Some of the men who’ve been living in the warehouses said that KBR representatives visited the site two weeks ago. They said Najlaa held their passports until the KBR inspection, which Najlaa officials denied. Seizing passports is a violation of the U.S. military’s 2006 instructions to contractors.

KBR didn’t answer direct questions about the warehouses but issued a two-paragraph statement. “When KBR becomes aware of potential violations of international laws regarding trafficking in persons, we work, within our authority, to remediate the problem and report the matter to proper authorities. KBR then works with authorities to rectify the matter,” it said.

Reached in Kuwait, Najlaa chief executive Marwan Rizk said the company recruited the laborers for contracts it expected to begin servicing, but the work didn’t materialize. He didn’t specify which contracts fell through or why they were delayed. The company offers a number of services in Iraq, including catering at U.S. military bases. “We had some obstacles with the services we were contracted to do,” Rizk said. “These obstacles were not forecasted.”

He said it’s the company’s practice to begin paying its employees once they start their jobs, though Najlaa credits them from the time they arrive in Iraq.

While the main complaint in the warehouses centered on living in what many considered prison-like conditions, Najlaa officials said it was crucial to keep the men in the compound to prevent kidnappings or other dangers. “We’re in Iraq; it’s a war zone,” said Isha Rufaie, a Najlaa logistics manager who tried to calm the protest Tuesday.

Peters, the Sri Lankan, said the men had notified Najlaa officials in advance, and the firm had agreed to let them protest their status outside their compound. They walked in thick clusters up and down an airport side road that wouldn’t be visible even to the sparse traffic that passes on the airport’s primary routes.

The protest, nonetheless, caught the attention of Sabre, a British company that holds a contract to maintain security at the airport.

Sabre officers halted the protest by telling Najlaa to get the men back in the compound. Najlaa officials did so by telling the men they’d be paid Tuesday. They returned to the camp voicing skepticism that Najlaa would follow through. Some of them, reached by phone later in the day, said they hadn’t been paid.

Sabre representatives said they’ve closed similar buildings housing laborers near the airport in the past. Peters, the Sri Lankan, had a message for his countrymen who might consider pursuing work in Iraq. “There is little money here. The jobs do not come easily and people are being held against their wishes,” he said.

A group of about 50 men living in tents about a mile away were even worse off than the men in the warehouses, and they appeared to be victims of human trafficking. They live in huts they built with tarps and pieces of carpet, and said they had no access to food or water.

The property is under the control of the Iraq Civil Aviation Administration, which couldn’t be reached for comment Tuesday.

These men apparently didn’t arrive in Iraq with contracts promising them work, but instead had relied on agents who were supposed to place them in jobs. The men in the tent camp, who’re from the same countries as those in the warehouses, said they paid close to $5,000 to the agents.

“We came to make a good salary and go home, but we’re not lucky,” said Ganesh Kumar Bhagat, 22, a Nepalese man who sleeps with four others in a tent along the main airport road.

He hasn’t told his family that his plans did not succeed in Iraq, instead assuring them that he lives and works safely on an American base.

Bhagat and others at the camp gave a McClatchy reporter phone numbers for the agents who led them to Iraq. Some numbers had been disconnected. In other cases, people quickly hung up.