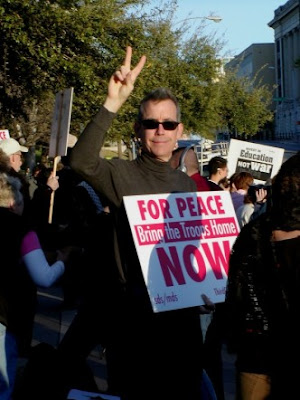 There was a liberal turnout at last night’s (March 19, 2008) Peace Vigil which started at 7 p.m. at the front gates of the Texas State Capitol in Austin, Texas. The vigil marked the fifth anniversary of Bush’s war in Iraq.

By the time the speakers began, the crowd had grown to an estimated 200-300 peace-loving folks. Many vigil participants held up anti-war signs and raised their hands high shooting the peace sign at the moderate drive-by traffic on Congress and 11th streets downtown. Most cars honked and shot peace signs back.

Several types of media covered the event. Reporters present were from radio, The Daily Texan U.T, and several photographers were shooting the event — and television film crews covered the vigil. MDS/Austin was strongly represented. Thanks to David Hamilton a lot of the crowd were holding up MDS ‘For Peace’ yard signs.

At dusk candles were passed out and lighted. Many people stayed until the full moon rose around 8:30 p.m. Thanks to all who participated. Click link below to view photos. View more photos here.