SAN ANTONIO — Protesters calling for an end to the war in Iraq gathered Wednesday night near the Alamo, the state’s most famous battle site.

About 30 people stood in Alamo Plaza — surrounded by the buzz of tourists — calling for an end to a war they said was costing Americans too much money and too many lives and preventing the nation from addressing needs at home.

The gathering in San Antonio, which likes to call itself “Military City USA,” was one of dozens held around the country on the fifth anniversary of the war.

“How can we have victory when there’s nothing to win?” said James Berbiglia, a 73-year-old retired Army chaplain who served in Vietnam. “It can’t be made right. It can only be made worse.”

He was among several former servicemembers who spoke at the event, where people held signs and occasionally chanted “Get out now.”

“I was in the military. I know what war is,” said Aaron Flores, who served three tours in Vietnam.

He said he believes more current military personnel would speak out against the war in Iraq if they were free to do so.

Berbiglin said Iraqis simply want American soldiers to leave their country, and if they do, Iraq will get back to normal. If Americans don’t leave, they’ll continue to make more enemies, he said.
“We have to get home before something more terrible happens,” Berbiglia said.

Nancy Russell, a retired Army lieutenant colonel, said the war in Iraq has created more enemies than friends for America.

There were no weapons of mass destruction, the early explanation for the invasion, and Russell believes the conflict was personal for President Bush, whose father didn’t depose Saddam Hussein in the first Gulf War.

Bush “doesn’t want to admit he screwed up. He made a major blunder and he can’t admit he was wrong,” she said.

In Austin, protesters lit candles and held signs as they gathered outside the state Capitol grounds, where one person stood next to two fake coffins representing the deaths of American soldiers and Iraqi civilians. Motorists honked their horns as they passed and two people kneeled in silence, the Austin American-Statesman reported.

“I think we have been having an effect,” Knicely said. “It can be discouraging, but … over time, things move.”

At a gathering in Madeline Park in El Paso, a crowd of about 80 people listened as the names of slain soldiers from El Paso and Fort Bliss were read. Protesters read letters from Iraq war veterans and called for a quick end to the war.

“I was completely opposed to it from the beginning, and I didn’t believe in a pre-emptive move from the beginning, even if the evidence thrown out by the administration was accurate, which it wasn’t,” Tammy Cagann, a math teacher at Riverside High School and an organizer of the vigil, said in a story of Thursday’s El Paso Times. 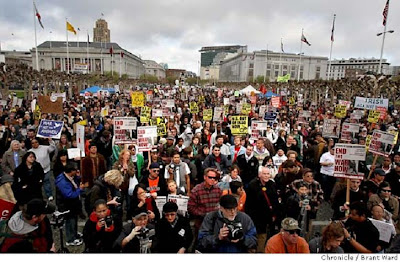 Protesters fill Civic Center Plaza in San Francisco Wednesday before a march into the Mission District on the five-year anniversary of the Iraq war. Photo by Brant Ward / S.F. Chronicle.
A day of protest across Bay Area
By SFGate / March 20, 2008

San Francisco — War protesters converged in San Francisco Wednesday for the five-year anniversary of the war in Iraq and, from early morning to late evening, rallied, marched, shouted, sang, danced and committed acts of civil disobedience to demonstrate their opposition.

Roughly 150 people were arrested, many of them in front of the office of U.S. Sen. Dianne Feinstein. Many of those arrested were participating in an afternoon “die-in” – collapsing en masse to evoke deaths in Iraq – though a few actively scuffled with police.

Demonstrators gathered in the evening at Civic Center Plaza to hear speeches and take an evening march to the Mission District. They carried signs with slogans such as “impeach” and chanted mantras like “money for health care, not warfare.”

In the morning, a crowd of about 500 people snaked its way through the Financial District, periodically prompting police to shut down intersections and city blocks and Muni officials to reroute buses.

Yet, despite the often creative costumes and messages, the protests were a far cry from the large and dramatic protests that marked the buildup to the war as well as the conflict’s early months. Tens of thousands came to San Francisco in those days, making it an epicenter of the anti-war movement. Roughly 2,150 protesters were arrested during the first three days of the war, Mar. 19-21, 2003. The city’s hotels were crammed, and mobs tried to shut down the Bay Bridge.

Wednesday’s biggest demonstration in the city occurred in the evening. Answer coalition organizer Richard Becker estimated the crowd of participants at 7,000.

This entry was posted in RagBlog and tagged GI's, Iraq, Peace Movement, Texas. Bookmark the permalink.