Richard Dawkins and "The God Delusion" 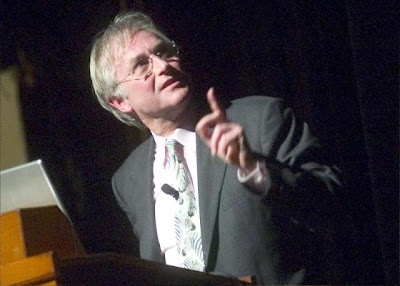 Richard Dawkins, an evolutionary biologist with star power, drew some 1,200 people to hear his take on the origins of the universe and the problems of religion.

The Oxford University professor and author of the best-selling “The God Delusion,” spoke Wednesday night at Hogg Auditorium at the University of Texas, where he ravaged creationism and design theories that claim a supernatural being created the universe and held up Darwin’s theory of natural selection as a logical alternative.

“I don’t want to come across as an enemy of religion so much as a friend of truth,” the British Dawkins said, though he admittedly enjoys satirizing and ridiculing the world’s faiths.

During his talk he showed a cartoon depiction of God at a computer engineering the parting of the Red Sea and pointed to images of Zeus, Baal and other ancient deities as delusions.

But his main concern, he said, is debunking the notion advanced by creationists that either God designed the universe or humanity was created by chance.

“Darwinian evolution is not a theory of random chance,” he said. “Very, very far from it.”

He described natural selection as a “powerful and elegant” process that offers hope that science will eventually be able to explain everything.

“The God Delusion” has already sold more than 1.5 million copies. That doesn’t count the foreign translations or the sales of the newly released paperback version.

Over the past few months, Dawkins’ speaking tour has electrified college campuses from Wisconsin to California, according to officials with theCenter for Inquiry who have helped organize the talks.

At the University of California at Berkeley, the 700-seat auditorium filled quickly and hundreds of people had to be turned away, said Debbie Goddard, a field organizer for the Amherst, N.Y.-based center.

Some 1,700 packed the hall at Stanford University, she said, with another 1,300 at the University of Wisconsin.

Organizers had to turn away more than 100 people at the door at UT. Among those who got in were three Oklahoma University students who drove Wednesday from Norman, Okla.

The success of Dawkins and fellow best-selling atheist authors such as Christopher Hitchens, Daniel Dennett and Sam Harris has also prompted a slew of books written to defend faith and debunk atheism.

Dawkins’ book has inspired “The God Solution: A Reply to the God Delusion” by James A. Beverley and “The Dawkins Delusion? Atheist Fundamentalism and the Denial of the Divine” by Alister McGrath and Joanna Collicutt McGrath.

Dawkins doesn’t find the responses worthwhile. In fact, he refers to the books — he’s counted 22 so far — as “fleas,” drawing from a line from a William Butler Yeats poem: “But was there ever dog that praised his fleas?”

But he said he is encouraged to see the religious establishment on the defensive and taking atheists seriously.

One of Dawkins’ “fleas” is John Haught’s book “God and the New Atheism.” Haught, a senior fellow in science and religion at Georgetown University’s Woodstock Theological Center, said he isn’t daunted by the new atheists, whose arguments he finds thin.

Their theories, he said, are based on scientism: “the view that scientific method is the only really reliable way to gather truth and come in touch with reality.”

Ironically, Haught said, that world view — that science can explain everything — requires a leap of faith as well.

He also accuses the new atheists of presenting — and attacking — a literal interpretation of religious texts without acknowledging that many believers have a more nuanced and complex understanding of religion.

“Not only do they not understand religion,” he said, “they themselves have the most literalist and primitive understanding of religion.”

Haught said religion has undergone attacks from skeptics before: philosophers such as Friedrich Nietzsche and Jean-Paul Sartre challenged Christian belief in the 19th and 20th centuries, prompting a post-atheist theology.

The new atheists, he said, are not theologically challenging.

Dawkins shrugs off the criticism. “The point is that if there is no God, then the whole of theology is irrelevant,” he said. “It would be like saying you can’t say you don’t believe in fairies unless you’ve consulted learned tomes of fairyology.”

This entry was posted in RagBlog and tagged Atheism, Philosophy, Religion, Science. Bookmark the permalink.