‘Is Our Children Learning?’ 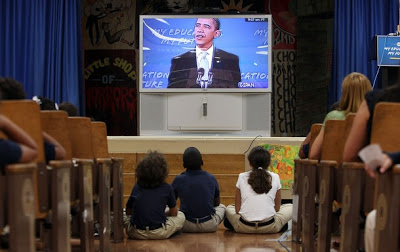 You’re in third grade, back to school in Texas. Shoes are too tight. Your new shirt is scratchy. And the strange kid sitting next to you — how’s he going to get that pencil out of his nose?

The teachers tell you to file into the gym. They turn on a television. Here comes President Obama. Boorrrrrring. Do you have to listen to this? Is there some kinda test afterward?

Some people in your part of the country didn’t want you to hear the president of the United States. It’s indoctrination. Socialism. Cult of personality. Stuff you’ll learn about on cable news shows.

“This is something you’d expect to see in North Korea or Saddam Hussein’s Iraq,” says Oklahoma State Senator Steve Russell.

And finally he says, “So don’t let us down — don’t let your family or your country or yourself down.”

The teacher says the lesson is to take responsibility for your destiny. Great. When’s lunch? Some kids don’t get to see the speech in Texas, because their parents kept them home, or their schools caved to a couple of loud guys in the parking lot. For them, the lesson is: play hooky whenever you feel like it, don’t respect authority, even your commander in chief, and if you say stupid things over and over you can get reasonable people to give in.

“There are few moments in my life when I’m embarrassed to say I’m from Texas,” says Ron Kirk, the former Dallas mayor and current U.S. trade representative, who watched the speech with high school kids not far from your elementary school. “This is one of them.”

You’re a senior in high school, in Kent, Wash. Senioritis! You’re going to coast, and still get into a bodacious college. Is this year over yet?

But now your teachers are on strike. They were told by a judge that their walkout is illegal. They were ordered to report to class. And yet . . .

“Oftentimes, acts of civil disobedience have to occur to right a wrong,” says the union president, Linda Brackin Johnson.

What’s the wrong? Too many meetings, for one. The teachers hate those mandatory meetings, and who can blame them. All those words that shouldn’t be verbs — prioritize, incentivize, progressivize.

They also want smaller classes. And a raise, of course. Awesome. Except, this year, your school district is broke. Your state is broke. And your country is broke. All the money went to bankers and auto makers and an unnecessary war that will end up costing nearly a trillion dollars.

Besides, the teachers are doing better than most. As the American Federation of Teachers reported in their 2007 wage survey, the average salary now is $51,000, and some make $100,000. While salaries for all U.S. workers fell sharply, to $46,955, teachers saw the highest salary increases in 15 years.

Good for them. This job is so lame. Duh! Is there anything more awful than that look you give them in first period — the half-lidded, blank-faced, don’t-even-think-of-calling-on-me glare? (You’re faking, but it works.)

The teachers should be happy to get raises while everyone else takes a hit. Happy to have a job in the worst recession in 65 years. Not in Kent, Wash.

They vote to ignore the judge’s order, break the law and stay on strike. The lesson is: defy authority when it suits your needs. Take a seat over there with the Texas parents who kept their kids home.

You’re in middle school in New York City. No more braces — the tracks are off the teeth. Sweet! You have a body you don’t understand, and voice you don’t recognize. In a few weeks, you’ll stop talking to your parents. You hate them. They’re the worst parents in the world.

One question: a teacher you were supposed to get for earth sciences, he’s gone. Somebody says he’s in the rubber room, along with 600 or so other teachers.

Frank McCourt was once a New York school teacher. He wrote about it in this book they may force you to read (don’t worry, you can probably get the summary on a SparkNotes link, like everyone else).

“In America, doctors, lawyers, generals, actors, television people and politicians are admired and rewarded,” he wrote. “Not teachers. Teaching is the downstairs maid of professions. Teachers are told to use the service door and go around the back.”

That was then. Now, as Steven Brill showed in The New Yorker, a teacher basically has to hold up the cafeteria cashier to be removed. (As if you’d ever want to eat there!)

The rubber room is purgatory, where bad teachers get their full pay to do nothing all day, awaiting arbitration for things like showing up drunk in class. The average stay for some, he wrote, is three years.

Lesson: maybe everyone should be required to listen to the last president — yeah that guy from Texas. Maybe he had it right — just once — when he said we got one big issue here: “Is our children learning?”

This entry was posted in RagBlog and tagged American Society, Barack Obama, Education. Bookmark the permalink.

2 Responses to ‘Is Our Children Learning?’