It’s All About the Oil … Again 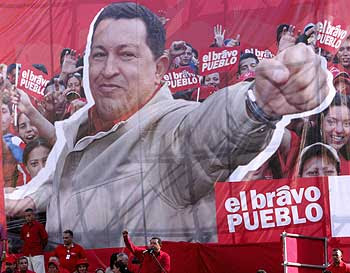 The US lines up its chess pieces to trigger the demise of the Bolivarian Revolution and achieve regional dominance.
By Ramón Santiago / May 13, 2008

Since the violation of Ecuador’s sovereignty by the Colombian military, relations between Venezuela and Colombia have been fraught to say the least. The “magical laptops” allegedly captured by Colombian forces have become a fountain of highly debatable intelligence information – all aimed at proving that Venezuela and President Chavez are somehow in cahoots with the FARC – and by extension will “prove” that the Venezuelan state is in fact a “sponsor of terrorism”. Interpol is due to report on the contents and findings in the laptops this Thursday, May 15th.

Resurrecting the US IV Fleet

While the laptop saga was developing it was announced that the defunct US IV Fleet will be reactivated after July 1st with the aim of, “employing naval forces to build confidence and trust among nations through collective maritime security efforts that focus on common threats and mutual interests”, according to Admiral Gary Roughead speaking from the Pentagon.

Despite Roughead’s attempt to describe the role of the IV Fleet as being somehow beneficial to the region, President Chavez sees it as outright intimidation as the US tries to shore up its declining influence in the Caribbean and South America. Remember that the IV Fleet was finally disbanded in 1950 after WWII as there were no threats in the region to US hegemony.

Manta military base to Colombo-Venezuelan border?

Upon assuming the Presidency of Ecuador in 2007, Rafael Correa stated that the US military base at Manta would not have its lease extended when it expires in 2009. The Manta base was established in Ecuador in 1998 under then president Jamil Mahuad.

The Manta base has been the subject of some controversy in recent weeks when suspicions pointed to the fact that the attack on the FARC camp on Ecuadorian territory was actually launched from Manta using US “smart bombs”. The attack was in collusion with the Colombian military whose Commander-in-Chief is President Álvaro Uribe.

Now we have the declarations of ex US Ambassador to Caracas, William Brownfield to consider. He was transferred to Bogotá from Caracas after failing to rally the Venezuelan opposition. Upon being asked about the Manta military base in Ecuador, which will be uprooted next year, Brownfield indicated that the base could be relocated on Colombian territory in La Guajira – on the Colombo-Venezuelan border. (See map below with La Guajira outlined in red) 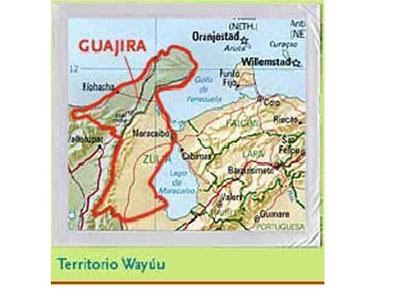 Former US Ambassador to Caracas, now transferred to Bogota
indicated that the US AFB at Manta could be relocated at
La Guajira, on the Colombo-Venezuelan Border

Note that La Guajira borders with Venezuela’s resource-rich Zulia state where the old oligarchs have had a long history of trying to secede from Venezuela itself. After huge oil reserves were discovered in Zulia early last century, the US has always had a strong interest in this region of Venezuela. This goes all the way back to just before WWI.

At this point let’s review the geopolitical chessboard. Here are the pieces:

* US IV Fleet in the Caribbean after July 1st

* Secessionist rumblings in Zulia. State governor Manuel Rosales is a fierce opponent of President Chavez. He ran against President Chávez in the last presidential elections in 2006 and lost by a wide margin.

* Current hostile relationship between Colombia and Venezuela. President Álvaro Uribe of Colombia is Washington’s main ally in the region.

* US base to be established in La Guajira if we are to believe Ambassador Brownfield.

* The “laptops” will officially spill their secrets on Thursday May 15th and will no doubt be used to accuse Venezuela of “sponsoring terrorism”.

* Vast oil reserves and infrastructure to exploit them already set up in Zulia, which borders Colombia.

* The US wants to destroy or at least weaken the Bolivarian Revolution as it spreads throughout the region, undermining US traditional influence in the “back yard”.

* The main objective is to oust President Chavez.

There you have it. Washington’s plans and objectives all ready to be put into action, with outright aggression impossible to rule out. The US IV Fleet and the establishment of a US military base in La Guajira are obvious taunts or to be more precise “saber rattling” against Venezuela.

We do not see US troops being involved but rather gradual proxy diplomatic tensions being built up by the Uribe regime. The objective will be to spark possible skirmishes in border regions such as in Táchira, Zulia and Apure which have been infiltrated by Colombian paramilitaries. (See map below) 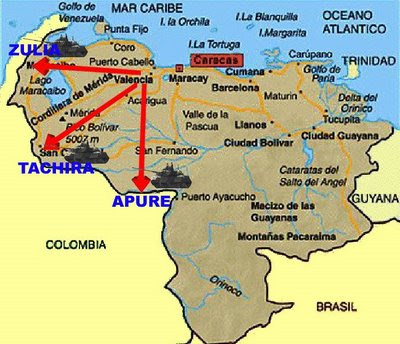 Venezuelan states of Táchira, Zulia and Apure have
been infiltrated by Colombian Paramilitaries

The chessboard and the heinous plans can be deciphered from the pieces in the US and Colombian “arsenals”. They hold all the ingredients to cause a regional conflict in South America. A regional conflict would suit US interests as a regional conflagration would give the US a pretext to “intervene to protect Venezuelan oil reserves in the interests of national security”. In another scenario, UN “peace-keeping troops” could be brought in as they were brought in for renewed occupation of Haiti, following the US-backed coup there.

The attack on the FARC camp in Ecuador was just a trial to judge the reaction of countries in the region as well as the OAS and the Río Group.

The next aggression in this ongoing chess game could trigger unforeseen consequences for the region as a whole. The pieces are in place but who will make the first attacking move, and when?

This entry was posted in RagBlog and tagged Latin America, Military, U.S. Government. Bookmark the permalink.