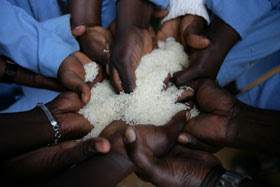 For years, Western experts promised Africans that free-market ideology would save them from poverty and famine. Now, one African country is showing that sometimes, a little protectionism can work wonders.

Farming has suddenly become fashionable again. Once a largely ignored corner of the development business, agriculture is now a hot field among experts more versed in structural adjustments than crop rotations. Record prices for cereal crops such as wheat, corn, and rice have many of them viewing farmers as a key component of economic growth in poor countries and as a supply-side solution to the political instability those high prices have caused everywhere from West Africa to Bangladesh. Researchers should be careful, however, to learn the right lessons from the countries that are already harvesting success.

Uganda’s importers, seeing the shift, have invested in new mills in the country, expanding employment and creating competition for farmer output, thereby improving prices. New mills, meanwhile, lowered the cost of bringing domestic rice to market. While people in developing countries across the globe are clamoring about the sharp rise in food prices, Ugandans are still paying about the same for rice as they always have. And Uganda is poised to start exporting rice within East Africa—and beyond.

In the 1990s, African governments sharply reduced or eliminated duties on imported rice, urged on by the World Bank, the International Monetary Fund (IMF), and some influential free-market economists. The assumption was that richer countries would reciprocate by curtailing subsidies to their own farmers. That never happened. In response, a few African countries have raised duties on rice, violating a key tenet of neoliberal trade philosophy. Protectionism is supposed to be bad—so bad that international advisors have spent decades convincing African governments to open their markets as wide as possible to imports.

One of the leaders of Uganda’s rice revolution is Gilbert Bukenya, the country’s vice president and its leading advocate for the commercialization of agriculture. I first met Bukenya at his home on the shores of Lake Victoria, where he laid out the basic philosophy. “By farming smarter, Ugandans not only can grow more, they can earn more money,” he told me. An advocate of food self-sufficiency, Bukenya wants Ugandans to eat more homegrown rice, boosting local farmers and rice millers while at the same time freeing hard cash for other uses. Bukenya has long promoted a new African rice that grows in “uplands” (as opposed to wetland “paddies”) and requires less water.

Embracing a new variety is only part of the working-smarter formula. Once rice output began to expand, Bukenya and other Ugandan politicians played another card: They stumped for a duty of 75 percent to be imposed on foreign rice. The legislature passed the duty, which stimulated domestic rice production further.

Uganda’s success in expanding its rice production is especially interesting because the people of sub-Saharan Africa spend nearly $2 billion a year on rice grown outside Africa. The amount Africans spend on rice alone equals the national budgets of the governments of Ghana and Senegal combined. With the help of wise policies, African farmers could grow much more rice on their own, maybe even enough to eliminate virtually all imported rice. Eliminating rice imports would benefit Uganda by ensuring a local supply as Asian rice is becoming less available and more expensive.

What Uganda recognized is that the world’s major rice exporters actually practice the opposite of what the World Bank and IMF preach. Much of the rice grown in Pakistan, Vietnam, and especially the United States is stimulated by subsidy payments to farmers. Then the rice is “dumped” into African markets at low prices—sometimes below the cost of production. These producers also maintain stiff duties against imported rice, contradicting free-market ideology but helping protect domestic farmers against global competition. And for good reason: Virtually every successful Asian economy was built on selective trade barriers—and in China and India, the world’s two fastest growing economies, such barriers remain in force. Even South Korea and Japan maintain massive duties on imported rice simply to protect the livelihoods of their own rice farmers. Rice duties are working in Uganda—and also in Nigeria, where rice output is also soaring. In both countries, the value of imported rice is declining and locally produced rice is winning the hearts and minds of ordinary consumers.

Rice is just one example. African governments might wish to repeat Uganda’s success with other crops (which ones depends on specific trade flows and the agricultural strengths of the particular country). But African governments should be encouraged to rely on a mix of economic tools, including farm protectionism, aimed at helping indigenous producers.

Uganda and other African countries need to be careful that protectionism doesn’t become a cover for inefficiency or corruption. And selective protectionism is no panacea for Africa even when such policies effectively aid local producers. But, after decades of hardship, economic self-reliance is a worthy goal for most African countries. Uganda’s rice experiment deserves wider attention, if only because it shows that Africans aren’t passive victims of global economic forces. They are fighting back.

G. Pascal Zachary, a former Wall Street Journal correspondent, teaches journalism at Stanford University and is finishing a book on Africa for Scribner.

This entry was posted in RagBlog and tagged Global Economy, Sustainability. Bookmark the permalink.