‘I had two novel manuscripts in my drawer, which meant that I had options my fellow graduate students just didn’t have.’ 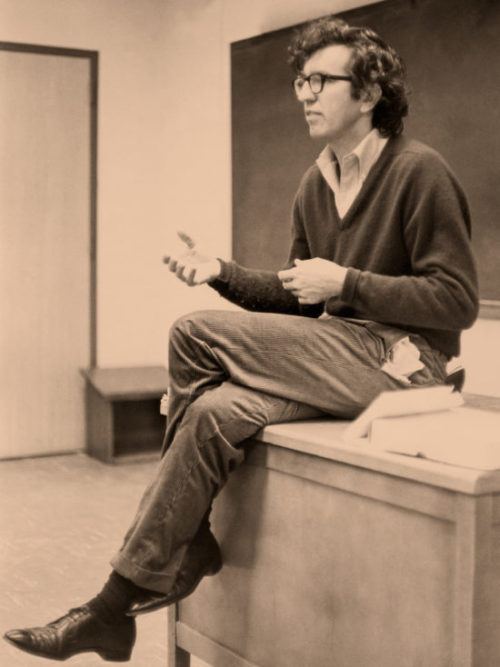 In the fall of 1954, then-18-year-old McMurtry, right off the family ranch, arrived in Houston to begin his first semester at Rice Institute (later to be renamed Rice University). As an undergraduate, McMurtry shared a garage apartment on North Boulevard near Rice Village with roommates Douglas Milburn, who would become a German language professor at Rice, and future Houston engineer, John Haydel.

In his memoir, A Literary Life (2009), McMurtry fondly recalls how at Rice he was introduced to American-born, British “Modernist” poet, T.S. Eliot, and his “stream of consciousness” writing style used in his 1915 poem, “The Love Song of J. Alfred Prufrock.” This was a technique that would also be adopted by Beat-era writer Jack Kerouac, songwriter Bob Dylan, and McMurtry’s own son, singer-songwriter James McMurtry. In the 1970s, there was also a watering hole that was popular with Rice University faculty and students alike; including McMurtry, located on Lower Westheimer, in the Houston neighborhood of Montrose. Named for the epic poem, it was known to all as Prufrocks.

Unlike his Rice undergraduate contemporaries, one required freshman course, Math 101, proved to be too much of an academic challenge for McMurtry, and in January 1956, after a year and a half of studies, he transferred to North Texas State Teachers College (now North Texas State) in Denton. McMurtry graduated, in the spring of 1958, from North Texas with a B.A. in English, and in September of 1959, he moved back to Houston for graduate school at Rice with his free-spirited, soon-to-be wife, Josephine Ballard. They settled into their new home near Rice Village and by this time, McMurtry had two rough drafts of two novels completed: Horeseman, Pass By and Leaving Cheyenne.

Always a pragmatist, McMurtry reflected on his life in Houston as a graduate student in his memoir, A Literary Life: “If I was uncomfortable at all during this period it was because I knew well enough that I wasn’t a scholar and would never become one. After all, I had two novel manuscripts in my drawer, which meant that I had options my fellow graduate students just didn’t have.”

McMurtry earned his M.A. in English from Rice University in 1960; however, for one who was insecure about his scholarly inadequacies, upon graduation, McMurtry applied for and received a Wallace Stegner Fellowship in the post-graduate studies program at Stanford University. It was there McMurtry met and developed a life-long relationship with former wrestler-turned-writer and 1960s counter-culture icon, Ken Kesey, and his wife, Norma Faye.

When McMurtry returned to Houston and Rice University to teach undergraduate English in 1963, his first two novels Horseman, Pass By (1961) and Leaving Cheyenne (1962) had already been published, and the former, Horseman, Pass By had been adapted into a screenplay that became the Hollywood feature movie, Hud, starring Paul Newman, Patricia Neal, and Melvin Douglas.

McMurtry, his wife, Josephine, and their toddler son, James, settled once again into a home near Rice Village; this time at 2219 Quenby Street in Houston’s South Hampton subdivision, and it was in front of this location, where Ken Kesey and his band of “Merry Pranksters,” fueled on then-legal LSD, parked their day-glo-painted International Harvester bus, to the shock and amazement of McMurtry’s conservative, Lyndon Johnson-era, South Hampton neighbors. This historic incident of Kesey and his Pranksters visiting the McMurtrys while on a drug-induced, cross-country road trip to the 1964 World’s Fair in Flushing, New York, is documented in Tom Wolfe’s classic novel, The Electric Kool-Aid Acid Test (1968).

During this time that he resided in Houston, McMurtry also engaged in a parallel career of rare book seller. His first venture into the used book arena transpired when he managed the store, The Bookman, located on San Felipe Street and owned by Houston socialite, Grace David. Grace would be the inspiration for the character, Aurora Greenwood, from McMurtry’s sixth novel, Terms of Endearment (1975).

McMurtry always hoped to be a professional writer, but as he reflected in his memoir, it wasn’t until the publication of his fifth book, All My Friends are Going to Be Strangers (1972), that he convinced himself he actually was one, and would remain one for the rest of his life. After nine years at Rice teaching undergraduate English, and receiving tenure, McMurtry bid farewell to Houston and to what he thought would be the end of his academic career. McMurtry taught his last undergraduate English class and then relocated to Washington, D.C., where he operated another rare book store, Booked Up, with his then-business partner, Marcia Carter.

While residing in Washington, D.C., McMurtry collaborated with director Peter Bogdanavich and his wife Polly Platt on the screenplay of his third novel The Last Picture Show (1966), and there, he also taught creative writing at George Mason University, in Fairfax, Virginia. McMurtry and Carter closed their bookstore in 1989, and he then relocated to New York City after accepting the position of president of the international freedom-to-write, nonprofit organization, PEN American Center, located in Manhattan. This was a position previously held by writers Norman Mailer, Jerzy Kozinski, and Susan Sontag.

1986 was the year McMurtry won the Pulitzer Prize in Fiction for his novel, Lonesome Dove (1985). This novel was the first in a series that had both a sequel and two prequels. In his memoir, McMurtry confided that because of the competitive nature of his friendship with Ken Kesey, after he won his Pulitzer Prize, their relationship was “never quite the same.” Ken Kesey died in Eugene, Oregon, in 2001, at age 66.

Larry McMurtry moved back to Archer City, Texas, in 1991, the town where he was raised, and in April 2011, he married Norma Faye Kesey, the widow of writer Ken Kesey, in a civil ceremony. Together they operated his already established, sizable rare book depository and online business, Booked Up, Inc., until August 2012, when McMurtry auctioned off more than 300,000 titles from his personal collection that he publicized as, “The Last Book Sale.”

Larry McMurtry is survived by his wife, Norma Faye McMurtry; his son, songwriter, James McMurtry; his grandson, songwriter, Curtis McMurtry; his two sisters, Sue Deen and Judy Mclemore, his brother, Charlie McMurtry, and his former wife, Josephine Ballard. Some family members were by his side at the time of his passing including long-time collaborator, Diana Ossana, with whom he shared writing credits, a Golden Globe, and an Academy Award, in 2006, for “Best Adapted Screenplay,” for the feature movie, Brokeback Mountain. In his Golden Globe acceptance speech for the adaptation of the short story by E. Annie Proulx, McMurtry paid tribute to his Swiss-made Hermes 3000 typewriter.

Perhaps it is only fitting to reveal the origin of the title, Horseman, Pass By, McMurtry’s first novel and his first real commercial success. The title is borrowed from another literary figure from another era — William Butler Yeats. Horseman, Pass By is the last line of the epitaph of the Irish poet which was taken from one of his final poems, “Under Ben Bulben.” Yeats, who won a Nobel Prize in Literature in 1923, died in 1939. He was buried in Clare, Ireland, and on his tombstone, the following three lines are engraved:

Cast a cold eye,
On Life, on Death.
Horseman, pass by.

[Ivan Koop Kuper is a freelance writer, professional drummer, real estate broker, podcaster, and a frequent contributor to The Rag Blog. He invites everyone to follow him on twitter @koopkuper and he is available for comment at: koopkuper@gmail.com.]

1 Response to Ivan Koop Kuper :
LITERATURE | Larry McMurtry: The Houston years and beyond