JONAH RASKIN :
LITERATURE | To cancel or not to cancel Jack London

Reflections on an American writer and a controversial movement. 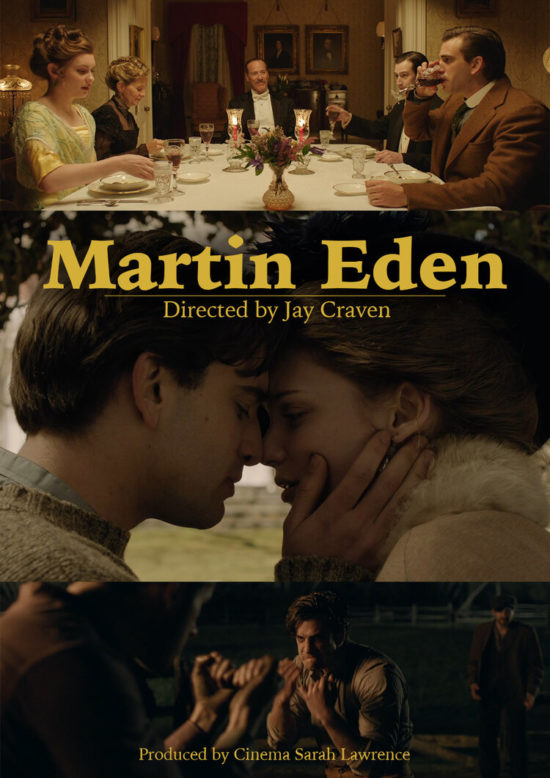 Jack London’s ashes, which are buried under a rock on Sonoma Mountain in Northern California, must be calling wildly to the living. In a new movie just out, that’s titled Jack London’s Martin Eden, Russ Brissenden, one of the main characters, who also figures in the novel, Martin Eden, is an African-American. The film also features two women of color who are labor activists and socialists. In London’s 1908 book there are no Black characters or people of color. Brissenden is as white as can be.

In fact, there are no significant Black characters in any of London’s 50 books, though there are some Mexicans and some Asians. The author wanted the real world to be for whites only. He mostly populated his fictional universe with white men and white women.

London was raised by an African-American woman
and an ex-slave.

As a child, London was raised by an African-American woman and an ex-slave, named Virginia Prentice, whom he called “Mammy,” much to her annoyance. It’s likely she would have been sad, hurt, and angry if she had read London’s essays, like “The Salt of the Earth,” on the superiority of the white race, and his letters in which he expresses what sounds like racist ideas.

In a letter dated June 12, 1899, he wrote “The negro [sic] races, the mongrel races, the slavish races, the unprogressive races, are of bad blood – that is, of blood which is not qualified to permit them to successfully survive the selection by which the fittest survive.” Eleven days later he wrote about “the niggers of Africa,” and insisted that socialism was “devised for the happiness of certain kindred races.” Twelve days before Christmas 1899 London reiterated his white supremacist views and explained to a friend, “the black has stopped, just as the monkey has stopped. Never will even the highest anthropoid apes evolve into man; likewise the negro into a type of man higher than any existing.”

A social Darwinian, London belonged to the Socialist Party for much of his life. With Upton Sinclair, he founded the Intercollegiate Socialist Society, the forerunner of Students for a Democratic Society. Still, there was no one like London in SDS. Indeed, he exposed the poverty at the heart of the British Empire in The People of the Abyss and he described his life as a hobo in The Road, which inspired Jack Kerouac to write On the Road and at times, called for revolutionary violence to overthrow capitalism and create a harmonious society for white people.

To cancel Jack London would be to cancel some of the history of Sixties activists.

Arrested by cops and imprisoned in Buffalo, New York, he disliked cops and prisons, empathized with prisoners and would have cheered the verdict in the Derek Chauvin trial. To cancel Jack London would be to cancel some of the history of Sixties activists and organizers.

London’s fans don’t always defend him down the line, though they often say that his contemporaries were racists and that he merely expressed the commonly held views of his time. Granted, America in the 1890s and the first-decade-and-a-half of the 20th century — London died in 1916 at the age of 40 — was a racist society, but not all Americans were racists. The National Organization for the Advancement of Colored People (NAACP) was founded in 1909 in part in response to the murder of two Blacks in Springfield, Illinois, and the burinng of 40 homes owned by Blacks.

The founders of the NAACP included whites such as Mary White Ovington, Henry Moskowitz, Oswald Garrison Villard, and William English Walling, who was a friend of London’s, along with African-Americans such as Ida Wells-Barnett, Archibald Grimke, Mary Church Terrell, and W. E. B. Du Bois, the author in 1903 of The Souls of Black Folk.

‘Jack London’s Martin Eden’ is the second movie based on
the author’s 1909 novel.

Jack London’s Martin Eden is the second movie based on the author’s 1909 novel about a sailor who becomes a successful writer in the San Francisco Bay Area and then commits suicide by traveling on an ocean liner and lowering himself into the water, never to reemerge.

In both movies, Martin Eden, by the Italian director Pietro Marcello, and Jack London’s Martin Eden by the American filmmaker, Jay Craven — with ample help from students at Sarah Lawrence College — the protagonist ends his life by walking into the ocean, not by taking an ocean liner out to sea and then descending beneath the waves.

Craven has a long history as an impassioned anti-war activist. He has also made several lyrical, must-see films, including High Water, Where the Rivers Flow North, and A Stranger in the Kingdom.

London scholar dig in their heels almost every time someone calls their hero a white supremacist.

In both Craven’s and Marcello’s movies, suicide ends the protagonist’s life, as it may also have ended London’s life, though that’s as contentious a topic as any other in the world of Jack London scholars who dig in their heels almost every time someone calls their hero a white supremacist or a suicide. Their allegiance is embarrassing.

For the most part, the London faithful have been opposed to the movement to cancel Jack London in Oakland, California, and remove his name from the Square that attracts millions of tourists and millions of tourist dollars. The cancellers, if I can call them that, want to rename it “Barbara Lee Square.” Oakland residents also want to remove a statue of the author and replace it with one of Lee, an African-American and a longtime Congresswoman who represents the East Bay.

If the two Martin Eden movies and a 2021 London biography by Jay Williams titled Author Under Sail are an accurate indication of the way the winds are blowing, it seems unlikely that the famed author will be cancelled in the city where he cut his eye teeth. Across the Bay, the San Francisco Board of Education has just walked back its controversial decision to cancel the names of 44 public schools, including those of George Washington, Thomas Jefferson, and Abraham Lincoln.

London would have had a difficult time in 2020 deciding whether to vote for Joe Biden or for Donald Trump.

The names Jefferson Davis and Robert E. Lee bespeak slavery. Not so Jefferson and Washington who owned slaves, but who have not been primarily identified as slave owners. Cancelling Jack London and his books would deny readers and students of American literature and history an opportunity to understand an author who was simultaneously a socialist and a white supremacist, and who would have had a difficult time in 2020 deciding whether to vote for Joe Biden or for Donald Trump.

In a statement about the making of his movie, producer and director, Jay Craven doesn’t say anything about London’s belief in white supremacy, or why he cast a Black character in the role of a white man, which seems like one sure way of remaking London so he’s alive and well in the present day. It’s exciting to see the Black actor, Phil McGlaston, reimagine and revive the character of the socialist, Russ Brissenden, who like Martin Eden commits suicide in the novel.

Craven does laud the author for his resilient women characters. He also suggests that London’s novel “reverberates today, as so many struggle with formulating lives and identities that are tempted by the dream and the hard work to achieve it, while simultaneously plagued by the inconsistencies of class, money, race, gender and love.”

Perhaps that’s all that needs to be said about those topics. When they watch Craven’s movie, audiences can draw their own conclusions about class, race, and sex, and decide if they want to cancel Jack or try to understand the contradictions inherent in the life and the work of an American original.

In one of the novel’s most memorable scenes, Eden looks in a mirror and asks, “Who are you, Martin Eden?” “What are you? Where do you belong?” What thinking and feeling person hasn’t asked those same questions.

Jay Craven’s new movie reflects his own sense of political struggle and his ingrained cinematic aesthetics that audiences — whether born of the #MeToo and the Black Lives Matter movements, or the cultural revolutions of the Sixties — ought to see for an appreciation of where we have been as a society and where we still need to go.

It is not necessary to read London’s Martin Eden, before watching Jay Craven’s film, though it might help. The director and his team have borrowed little details from the novel and sprinkled them throughout the film. There are also stunning photos, some of them by London himself who was an outstanding photographer who documented the lives of the poor in England. Craven does not yet have a distributor for his film. Anyone who wants to see it, and appreciate its beauty for themselves can email him at jcraven1590@gmail.com.

5 Responses to JONAH RASKIN :
LITERATURE | To cancel or not to cancel Jack London