James Howard Kunstler : Our Gods are not Happy 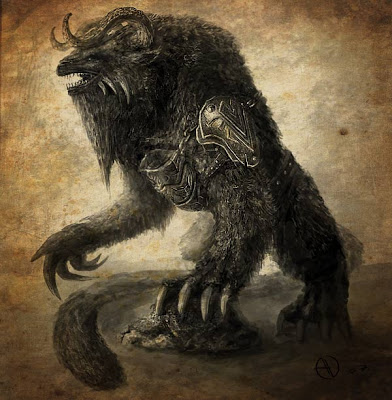 A side-trip to the local mall — where else to buy ammo around here? — evinced an epic struggle for supremacy of the chain stores between the Great Pumpkin and Santa Claus, with both fat-assed icons trying to shove the other out of the primary display sites as if the store aisle were a WWF ring in some grubby forsaken Palookaville far far from the salons of Washington decision-making, which, I guess, this is.

This is the kind of place that a Jimmy Stewart character would have called home in 1946; only today it looks like a place taken over by a certain species of space aliens, slovenly in mind as well as body.

Our gods are not happy. Anyway, that third fat-assed icon, the Thanksgiving Turkey, was nowhere in sight, perhaps due to the recognition that there is far more grievance than gratitude ‘out here’ in the fly-over zone.

America still does everything possible except prepare to become a different America, perhaps even a better America than the current release, and this is unfortunate because history is merciless. History doesn’t care if the dog peed on your homework… or you had car trouble this morning… or the tattoo on your neck got infected… or (to take this in another direction), you justified robbing scores of billions of dollars out of the mortgage sector because your too-big-to-fail company came down with the financial equivalent of swine flu and the top executives were hallucinating that they lived in a world with no boundaries of law or common decency.

We’re at another one of those weird inflection points of “current events” — a momentous eddy in the larger stream of history. A good deal of the already-proclaimed return to normality (“normalcy” in WGHarding-speak) depends on something close to a normal holiday shopping season, when so much of the nation’s merchandise inventory moves from WalMart to under the Christmas tree.

Of course, even if it were to turn out like a year-2005-type credit card binge, the result would surely be a sort of hemorrhagic fever of buyer’s remorse afterward. An aerial view of the Heartland long about February 1st would show households blowing up like individual kernels of popcorn at an accelerating rate until the terrain itself was obscured by an evil fluff of financial woe suffocating the poor folks trapped under it.

Over the weekend, The Huffington Post ran a McClatchy news service story about Godman Sachs’s misdeeds around the issuance of mortgage backed securities. The basic idea in it was that GS was aggressively gathering trash mortgages from fly-by-night “originators” all over America to bundle into tradable security paper, which they then pawned off on feckless, inattentive investors (pension funds, foreign banks, etc) seeking miracle returns — at the same time that GS was buying credit default swap “insurance” by the bale, knowing full well that the collateral backing their own issuance of MBS was of a quality somewhere between dead carp and dog poop.

In other words, they were shoveling shit investments out of one window, and betting against the value of them from another window. Thus a picture resolves of GS’s “true opinion” of the securities it peddled, and the question arises whether failure to inform the peddled of this opinion constitutes fraud. I certainly think it does.

I’ve been making substantially the same case for two years now, so it is interesting to see the mainstream media awaken to a story-line that an ambitious nine-year-old could have pulled off the Web over recent months. I also continue to assert that a flurry of bonuses paid out this holiday season by Goldman Sachs and its other amigos at the top of the banking food chain will be greeted by violence — which will be the natural outcome of a society whose government fails to even give the appearance of protecting its citizens from organized crime. How did a sock puppet get appointed head of the U.S. Department of Justice, folks will wonder.

How bad is the situation “out there” really? In my view, things are veering toward such extreme desperation that the U.S. government might fall under the sway, by extra-electoral means, of an ambitious military officer, or a group of such, sometime in the near future. I’m not promoting a coup d’etat, you understand, but I am raising it as a realistic possibility as elected officials prove utterly unwilling to cope with a mounting crisis of capital and resources.

The “cornpone Hitler” scenario is still another possibility — Glenn Beck and Sarah Palin vying for the hearts and minds of the morons who want “to keep gubmint out of Medicare!” – but I suspect that there is a growing cadre of concerned officers around the Pentagon who will not brook that fucking nonsense for a Crystal City minute and, what’s more, would be very impatient to begin correcting the many fiascos currently blowing the nation apart from within. Remember, today’s U.S. military elite is battle-hardened after eight years of war in Asia. No doubt they love their country, as Julius Caesar and Napoleon Bonaparte loved theirs. It may pain them to stand by and watch it dissolve like a castle made of sugar in a winter gale.

I raise this possibility because no one else has, and I think we ought to be aware that all kinds of strange outcomes are possible in a society under severe stress. History is a harsh mistress. For all his “star quality” and likable personality, President Obama is increasingly perceived as impotent where the real ongoing disasters of public life are concerned, and he has made the tragic choice to appear to be hostage to the bankers who are systematically draining the life-blood from the middle class.

Whatever we are seeing on the S & P ticker these days does not register the agony of ordinary people losing everything they worked for and even believed in. In a leadership vacuum, centers don’t hold, things come apart, and rough beasts slouch toward Wall Street.

4 Responses to James Howard Kunstler : Our Gods are not Happy