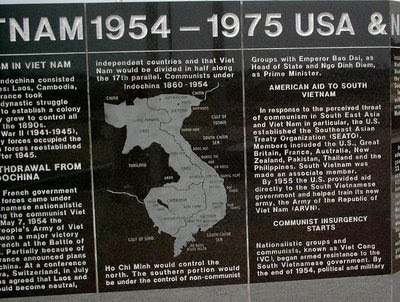 Public suspicion of government on the rise:
The return of the Vietnam Syndrome

I teach a course on United States foreign policy. I was just finishing up a discussion of foreign policy in the Nixon/Ford (and Kissinger) period, 1968 to 1976. As I talked about how the consciousness of most Americans in the 1970s changed, I emphasized the rising crisis of legitimacy of American political institutions and opposition to presidents sending troops into foreign lands, the so-called “Vietnam syndrome.” As I lectured to a large group of students who may have been thinking, “What the hell is he talking about?” I began to reflect on what might be instructive about the mid-1970s for analysis and activism today.

Richard Nixon won the presidential election in 1968, promising that he had a “secret plan” to end the war in Vietnam. As the subsequent years unfolded the secret plan became clear: pulling most U.S. troops out of Vietnam while launching a massive bombing campaign targeting virtually every conceivable site in North and South Vietnam, and invading Cambodia.

The U.S.-led war expanded in the most brutal way, at the same time that ground troops returned home. To undermine growing opposition to the war he initiated carrot and stick policies, ending the draft and launching a nationwide program of counterintelligence and police violence against anti-war and anti-racist activists. The drive to repress dissent spread to opponents of the war in the Democratic Party including against the 1972 anti-war candidate Senator George McGovern. The Nixon team, from the White House to small time burglars, engaged in covert programs to disrupt the McGovern campaign. Thus the seeds were planted for the Watergate scandal that forced Nixon to resign his presidency.

Because of the war overseas, repression at home, and rising economic crisis brought on by war in the Middle East, dramatic increases in the price of oil, declining relative competitiveness of the United States economy, the American people began to turn against their government. Enter “legitimacy crisis” and “Vietnam Syndrome.”

What is a Legitimacy Crisis?

Theorists as varied as Karl Marx, Antonio Gramsci, and a variety of American political scientists have written in their own ways about “legitimacy” of political institutions and how degrees of it affect stability and change. We can say that a “legitimacy crisis” exists when there is a substantial decline in the level of support for particular regimes, governmental institutions and/or the political leadership of a country.

Polling data from 1964 (when Lyndon Johnson won a huge election victory over conservative opponent Senator Barry Goldwater) until 1976 (at the end of the eight-year period of the Nixon/Ford administration) indicate a dramatic decline in the trust that the American people had in the government. In 1964, seventy five percent of the people said they trusted their government “always or most of the time.” That declined to thirty percent in 1976. The slide continued until 1980. By 1984 President Reagan’s popularity boosted trust to over forty percent. Then a decline followed bottoming out at twenty percent during the mid-1990s.

Trust in government increased after 9/11 in 2002 but by 2007 had declined again to 26 percent. While we can quibble over the meaning of numbers, methodologies, and questions asked, the general thrust of the data indicates a substantial decline in support for government and its leaders since the 1960s spurred by Vietnam, Watergate, and economic crisis at home. As popular as Ronald Reagan was, he never reached the level of support held by Presidents Eisenhower and Johnson.

As to foreign policy, polling data, protest activity, and pressure from influential and grassroots lobbying groups led politicians “inside the beltway” to conclude that the American people did not want their country to engage in another long, unwinnable, and controversial war again, such as Vietnam. Thus every presidential administration from Jimmy Carter on regarded with scorn the constraint that the “Vietnam Syndrome” placed on their capacity to act in an overt and massive military way overseas. President George Herbert Walker Bush confirmed this perceived constraint when he announced at the press conference ending the first Gulf War: “At last we have licked the Vietnam Syndrome!” He probably was premature in his exuberance.

More recently, political scientist John Mueller refined the idea of the “Vietnam Syndrome” by studying polling data from U.S. participation in three wars, Korea, Vietnam, and Iraq. He found a common trend in declining support for these wars. Namely duration and casualties (particularly number killed) are correlated with the systematic decline in support for the wars in question. When a president sends troops into combat, temporarily, the people “rally round the flag.” But as wars continue support declines.

Meanings of the Past

What is relevant about all this for today? Are there enough similarities between now and the 1970s to learn from the past? What is different today from the 1970s? Is there anything to be gleaned about the “consciousness of the American people” at various points in time that bear on the question of how to build a progressive majority and against more war and for social justice?

The 1976 candidate for president, Jimmy Carter, ran on a program, he hoped, to bring the disenchanted anti-war activists back into the mainstream political process. He said he would “learn the lessons of Vietnam,” cut military spending, and most important, use human rights as the primary criteria for foreign policy. He also pledged to continue the policies of “détente” that his predecessor had initiated with the Soviet Union.

The anti-war movements and social justice movements of the mid-1970s, never well-organized or interconnected, continued to disintegrate. After two years of modest efforts as promised, the Carter Administration tilted back toward the Cold War policies of its predecessors, spurred on by the trauma the collapse of the Shah of Iran created in the foreign policy establishment.

The Iranian revolution was followed by revolutionary change in Grenada, Nicaragua, and reformism on the horizon in El Salvador. In the summer, 1979, Carter signed a secret directive authorizing covert assistance to anti-Soviet rebels who were launching a war against the secular, Marxist regime that had come to power in Afghanistan.

In other words, as the social movements of the 1960s and ’70s dissolved, American foreign policy returned to its historic struggle against revolutionary ferment, albeit in a more covert way. It was candidate Reagan who took the struggle for legitimacy further by promising a more aggressive foreign policy that would lead to victory against the Soviet Union, “the evil empire.”

Even so, Reagan had to gradually bring the American people along to military intervention by invading and winning a one week war in Grenada, and developing a covert strategy to fight communism in Central America, Southern Africa, the Horn of Africa, and Southeast and South Asia called “low intensity conflict.” U.S. military intervention was “low intensity” for Americans while it was “high intensity” for peoples of the Global South.

Where is the consciousness of the American people in 2009? First, the wars against Afghanistan and Iraq, the illegal and immoral incarcerations and torture of suspected “terrorists,” egregious shifting of government funds to contractors tied to the administration, media manipulation and a host of other unethical and criminal act stimulated a substantial decline in legitimacy of government in the years of the Bush presidency. The campaign of Barack Obama, by contrast, mobilized masses of people to the political process in the hope that government could be made to work for the American people. His first six months in office, however, have raised some questions about the new administration’s ability to deliver on the hope.

In general, I believe we can conclude that despite ups and downs in levels of support for government since the end of World War II, there has been a substantial downward trajectory in support for government institutions and personnel. The American people are suspicious of their government and distrust their leaders. Many believe that government has been an impediment to the health and happiness of the people. Episodes of scandal, from Watergate, to Iran Contra, to Monicagate, reinforce the skepticism about government.

As to foreign policy, initial support for the invasion of Afghanistan and suspension of disbelief about the initiation of the war in Iraq has been superseded by the twenty-first century variant of the “Vietnam Syndrome.” Duration and growing casualties in both wars have led to growing anti-war sentiment.

In the 1970s, mass movements were dissipating. Today such movements, initiated over the last eight years, continue to grow. They are reinforced by the most significant economic crisis since the 1930s. Without mass movements, the twin consciousnesses of the America people as to legitimacy and foreign policy provide little hope for building a progressive majority. In fact, the legitimacy crisis, if not addressed with a progressive alternative vision of what government can be, can lead to massive alienation, right-wing populism, and violence.

Building a progressive majority, at this time, should include making our peace and justice organizations strong, presenting compelling images of what government can and should do, and strategizing about how the mass movements can demand participation in government. As to foreign policy, our campaigns should emphasize the length of our wars and the casualties resulting to Americans and victims in host countries, along with our arguments about the imperial underpinnings of such wars.

Even though the present and the future do not merely repeat the past, the past can inform what we do today,

12 Responses to Harry Targ : Legitimacy Crisis and the Vietnam Syndrome