James McEnteer :
The Tardy Boys and the Secret of the
Haunted Castle

After a while the castle lifted off from the planet
and we shot into the galaxy. 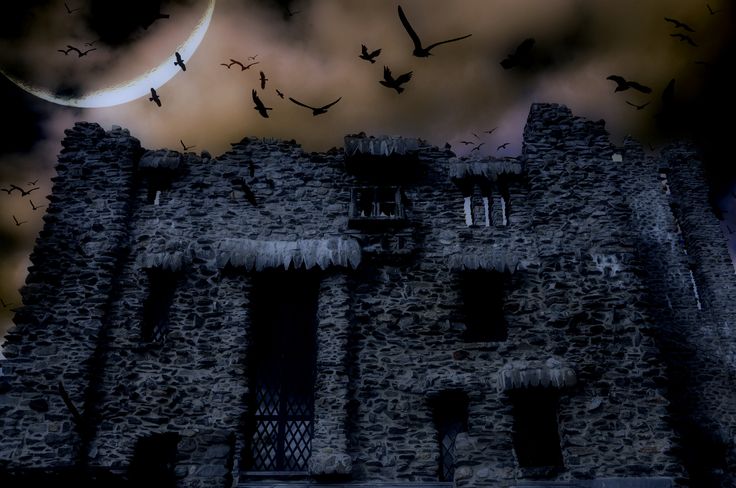 Gillette Castle during a bad trip! Tricked up image from Pinterest.

The spring of 1967 was gorgeous in Connecticut. We’d been going crazy the entire school year. The college was buzzed, high on drugs and youth and the ’60s. Now we could finally get back into nature, busting out lush and verdant around us, bright flowers here and there among the trees coming back to life. Connecticut’s back roads wind around villages, woods and water. Ian and I got in the car and took off into it all. It was way too nice to go to class.

In wooded hills above the Connecticut River we came to the gate of Gillette Castle State Park. A locked chain hanging across the road had a sign that said: “Closed for the Season.” The road disappeared ahead into the green woods. We parked the car and followed it. Intense smells of the forest waking up woke us up.

William Gillette got rich playing Sherlock Holmes on Broadway for decades. He bought a large chunk of woodland in central Connecticut and a hilltop to build a baroque, rough-hewn stone castle with turrets and crenellated bastions. The actor designed every bit of it. He had eclectic tastes and gobs of money. He built his own model train around the property, big enough to carry adult passengers. Lots of his Broadway friends came by for a ride. When he died the state made his land and castle a seasonal park. Open from June 1 into September. This was late May. Place was locked up tight or so it seemed. 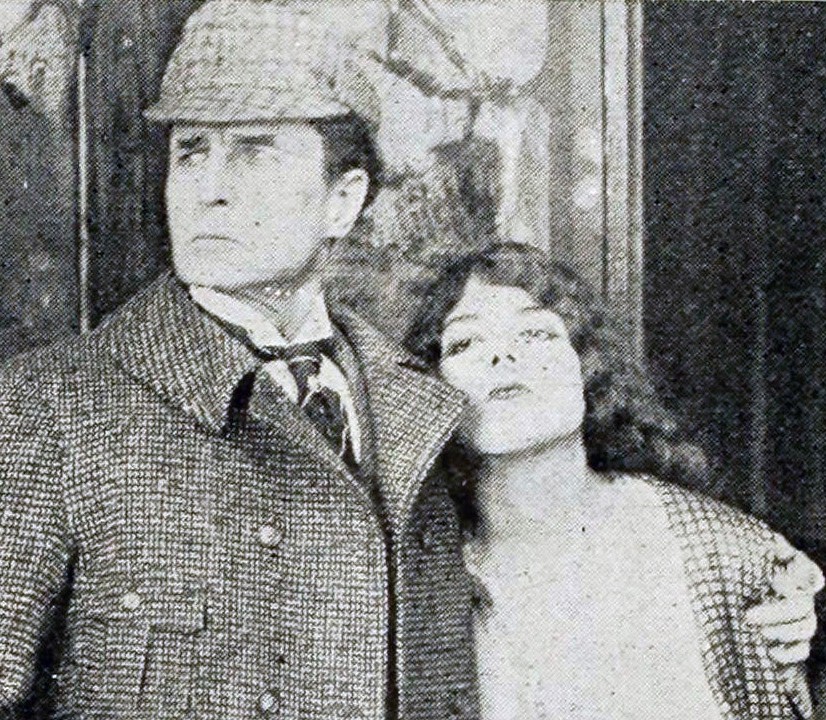 Ian and I walked around the closed castle, looking in windows and trying doors. We climbed rocks jutting out from one wall up to a large second-floor balcony. There we saw a windowed door. We tried and it opened, unlocked. We could go right in. So we did. Poked around inside long enough to see it offered a perfect stage set to come back some night, take LSD, and dally in the Cosmos.

We climbed up to the castle balcony, dropped acid, and lay back to watch the sky.

A week or so later we got our chance, on a clear full-moon night. We had come completely unprepared for our adventure with no food or water or supplies of any kind. We left the car again and walked down the forest road. We climbed up to the castle balcony, dropped acid, and lay back to watch the sky. After a while the castle lifted off from the planet and we shot into the galaxy.

We enjoyed that ride and the tours of magical kingdoms inside the castle. Gillette had indulged many sorts of whims, including full-size armored knights holding large, ornate axes, gaudy banners draped on the high walls and huge oriental carpets. One room, fairly small, was a gallery with a long padded bench in the middle from which to look at the paintings of the sea on all four walls. Lots of waves breaking on shore or tossing ships around in the deep sea, all of different styles and eras. We sat there, rocked by those waters. We went from room to room, each a separate world with its own logic.

We laughed and fooled around in that castle all night. As we sat exhausted in the early morning light, in oversized chairs near a huge stone fireplace downstairs, a truck raced by the castle at high speed. We saw the driver of the pick-up looking around frantically, trying to see whoever was in the castle. He didn’t stop, just circled the castle and headed back out to the entrance.

The caretaker looked right at us. We were hairy creatures, not of those woods.

Ian and I knew we had to get out of there. We went back upstairs to the balcony door, out to the low roof and then quickly down the protruding rocks. We started back down the road toward our car. Then we saw the truck coming and dove off the side of the narrow road into a ditch. Hard to know who we were kidding. The caretaker looked right at us. We were hairy creatures, not of those woods.

We regained our car and drove away, with no further sign of the man in the truck. We didn’t think much about him afterwards. Or that he might have noted my license plate number. We had other states of consciousness to occupy us in that languid, high-velocity spring. We lived in a cheap, off-campus dump in a dubious, industrial building next to the train tracks downtown. We finally jumped on one of those freight trains that clattered past several times a day. We were hoping for some far-off Big City adventure. But after half an hour the train stopped in the woods for so long that we finally had to jump off and hoof it home.

So when the Dean of the College called and asked to see us in his office immediately, we had no idea what it might be about. There were too many possibilities. The dean greeted us in his outer office. We were to proceed one by one into a smaller office and talk to a Connecticut State Trooper who had come here to take our statements. We must have had blank faces. His was angry.

“For breaking into Gillette Castle last week. They have proof you were there.”

Ian and I looked at each other. What proof?

“Out there for a pot sunrise, were you boys?”

I almost laughed out loud. But swallowed it. The dean was so hip.

The State Police had chosen to send Trooper Wesley Holmes, an oddly appropriate choice. In the course of giving my deposition I noticed that he had photocopies of a Gillette Castle Guest Book page. Ian and I had been idiotic enough to sign the book dozens of pages ahead of the final entry, giving our place of residence as “The Future.”

After Trooper Holmes had us sign our statements, he wanted them notarized. The dean told him the only notary was in an office next to the new dormitory complex on the other side of the campus. Many of our friends lived there, where we had enjoyed many high times. Word traveled fast at our small university. We were seen coming out of the Dean’s office and getting into a State Police patrol car with a Trooper.

As the cop car pulled up in front of that dorm complex, someone inside, perhaps in the throes of pot paranoia, decided the cops must have busted us for drugs, but were offering to let us off if we fingered our friends. Which must be what was happening now. We were bringing the state cop to the dorms to turn in all our dope-smoking pals. So the rumor spread. A sad, paranoid fantasy. Baggies of good smoke were reportedly thrown out of windows or dumped down toilets.

We signed the notarized depositions, bid Trooper Holmes adieu and thought no more about it until we got a call some days later from the State Police Barracks in Colchester. They needed us to take care of a few formalities. Today. At the police barracks Ian and I found out we were being charged with breaking and entering Gillete’s Castle, a felony.

As we were being fingerprinted and photographed, we recited every cop show cliché we could remember.

As we were being fingerprinted and photographed, we recited every cop show cliché we could remember, cracking ourselves up. Book ‘em, Danno. You boys’ll be doin’ hard time at the Big House. Lookin’good for the Line-Up. The police looked nonplussed. Which was how we looked when they told us we had to fork over a fifty-dollar bail fee. Otherwise we couldn’t leave the barracks. Of course we had no money. We had to call some friends to come and bail us out.

Meanwhile it was graduation time at the Olde Institution. As a senior, I was presumed to be making the leap, though in my case there was some academic suspense connected with that formality. My parents showed up, happy to see their investment paying off and their son gaining a measure of respectability. Graduation was on a Sunday. Ian and I were due in court Monday morning. I told my parents I had a job interview, which, while technically a bald-faced lie, had a certain kinship to the truth.

Monday morning 9 a.m.: We materialized at the rural Connecticut courthouse where we’d been told to report. We had been rehearsing certain Masonic (as in Perry Mason) speeches: “Your honor, when in the course of human events, as we strive in this expanding era to exercise our freedoms in creative ways, we hope that you’ll be able to take the larger view…”

Seeing that Ian was not quite 21, and we were charged with a felony and had not bothered to retain counsel, the judge appointed a local attorney present in court to represent us. That was all that saved our sorry carcasses. The lawyer knew the drill.

“Your Honor, there was no sign the defendants forced entry. Nothing was stolen or broken at the Castle, so we request that you reduce the charge to trespassing…”

“Find any beer bottles out there?”

He hit the gavel and we disappeared.

After weeks of build-up, it was all over in five minutes. Only later did we reflect on how foolish we were to show up unprepared, risking a felony conviction. But God protects fools and stoners. So some of us have double immunity.

What I regretted most was not being able to give my “liberty or death” speech to the judge. It could have been a real barn burner.

1 Response to James McEnteer :
The Tardy Boys and the Secret of the
Haunted Castle