Jeff Shero Nightbyrd :
Should we disarm the police?

A policeman who kills becomes prosecutor, judge, and executioner without facts and a trial. 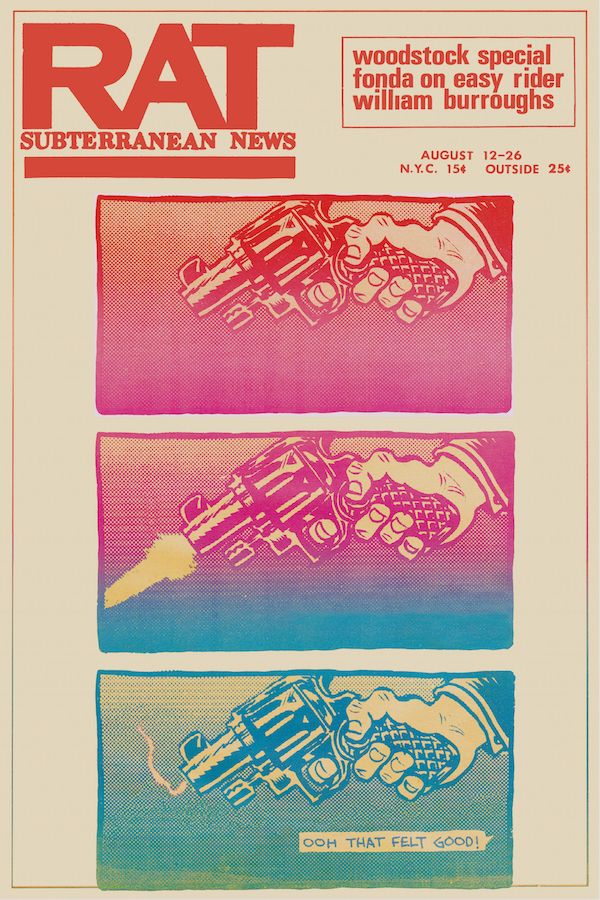 This cover of RAT, the New York undergrounder which Jeff edited, is from the August 12-26, 1969 issue. There’s also a new RAT website.

Five policemen were assassinated in Dallas. No surprise. In America on average 25 blacks are killed by police a month. And Dallas exists in a sort of negative vortex, a predictor of violent trends.

Once again, there’s been great hand-wringing over America as a twisted violent culture. But in fact violence has dropped precipitously over the last two decades. Despite more gun ownership, victims of non-fatal violent crime have dropped from 7,976 per hundred thousand to 2,254 per hundred thousand. In 1993, seven people were killed, today the figure is 3.6.

The problem is not American culture but police culture. Nothing has changed except cell phone technology allowing policing to be shared on social media. Aggressive cops act with impunity, enjoying the protection of major internal police reviews, prosecutors’ offices, and city politicians. Killing blacks is simply not a crime that leads to conviction.

Education is not the answer. Police operate inside a mythos of the “thin blue line” keeping the wolf packs of criminals away from the law-obeying public.

Police have been elevated from “cops” and “patrolmen” to “officers.” Police are generally solid working class people from working class culture. As anyone familiar with the military knows, there are “enlisted men” and “officers.” It blurs reality to call working police “officers” This change in media vocabulary panders to our domestic force with guns and gives them a veneer of undeserved respect.

The cops in the 1940’s Jimmy Cagney-type crime movies were the mirror image of the criminals they engaged in battle, sometimes almost indistinguishable without the uniforms.

The racist legacy going back to slavery still resonates in profound ways.

So we are deluding ourselves to think there will be any major change in police culture or the murder of blacks. Education and better pay has been tried since the 60’s but the racist legacy going back to slavery still resonates in profound ways.

The problem is that when a policeman shoots and kills a citizen the damage to the social fabric is much more than the individual’s death. A policeman who kills becomes prosecutor, judge, and executioner without facts and a trial. Our whole system of law and rights are undermined.

What is the solution?

Get guns out of the hands of police.

Handguns haven’t changed significantly since Wyatt Earp and the Old West. They are terrible instruments in urban environments. Try to use a handgun in a crowded situation and after the first shot everyone is in danger. What’s more, bullets often pass through soft human tissue and hit bystanders. Policeman should not be carrying guns.

It should be no problem to develop nonlethal weapons that incapacitate but don’t kill.

So then? We live in the world’s most technologically-innovative culture. With hundreds of billions going to military research every year, it should be no problem to develop nonlethal weapons that incapacitate but don’t kill. I’m not talking about pepper spray. Military technology is totally capable of producing holster-size weapons that work, given the distance and crowd situation.

One must wonder if this lack of progress since the Wild West isn’t intentional? A nonlethal weapon means the “perp” will wind up in jail with the prospect of some semblance of a trial. Kill them and there’s no testimony from the victim.

This campaign is politically doable. Progressive forces could pressure smaller or more aware cities to adopt new policing equipment. These cities would serve as a model and testing ground to get workable alternatives to police with guns.

Inside the police culture

I have had the good luck of drinking with cops and detectives at obscure workingmen’s bars in Miami and Los Angeles. You couldn’t find more colorful guys to share dimly lit space and debate the meaning of life. I never tried to hide who I was, which they considered somewhere between social activist and a dim, pointy-headed writer.

As Damon Runyon knew, men who work in the underbelly of a big city have the most incredible stories, mostly about human stupidity. The contention between us came down to the cops saying, “Jeff you’re a well-meaning guy, but you are totally naive. People out there are bad, crazy, and looking for an edge to take advantage of you.” It was an insurmountable difference.

Some of these guys joined the force with idealism, hoping to make the city a better place to live.

Some of these guys had joined the force with idealism, hoping to make the city a better place to live. But every day they experienced the dregs of humanity. Crazy domestic disputes turning into rage and violence. War veterans living on the street, confused and befuddled, robbed of their disability payments. Lying weasels who think petty robbery is better than work. Crack dealers killing their customers but not caring because they are also cracked up, knowing an inexhaustible supply of new addicts is just around the corner.

Over the years, some of these cops became hardened cynics. My argument that people are basically cooperative and good and that’s how our species flourished was to them from Alice and Wonderland dream world.

These cops weren’t stupid. Their frustration boiled at a court system that freed the guilty and tied up everything in red tape. I remember them laughing at me. “O.J.? Of course he did it.” After attending graduate school in criminal behavior in the mean streets, they had a pretty good, but not perfect, nose for guilt. They were great at spotting petty criminals and lost if they had to investigate corporate fraud.

These cops were great drinking pals who thought the real world was dark and twisted.

So bottom line: These cops were mostly great drinking pals who thought the real world was so dark and twisted they would cover for a buddy who committed a crime, even murder. Their reasoning might be: His wife was having an affair and it was driving him crazy, he couldn’t pay his bills, and some punk pushed him too far so he overreacted. But it could be us. So we better cover for our partner.

That’s a bit about the culture of policing. Part based on cops’ harsh daily reality and part an ongoing legacy of the sons and now daughters of policemen becoming cops themselves.

This culture of the great domestic armies of centurions following establishment orders is not going to change. Their history is too long and deep. The only solution is to get the guns and the macho sense that goes with them, out of the cops’ hands.

Read more articles by Jeff Shero Nightbyrd on The Rag Blog, and listen to Rag Radio interviews with Jeff.

[Jeff Shero Nightbyrd, who lives in Austin, was a leading figure in the ’60s New Left. He was national vice president of SDS and later was active with the Yippies. Jeff helped start Austin’s historic underground newspaper, The Rag, and was publisher and editor of RAT in New York and the Austin Sun. In recent years Jeff has run a major talent agency.]

2 Responses to Jeff Shero Nightbyrd :
Should we disarm the police?