Jim Hightower : ‘Too Big to Fail’ Is Too Big, Period. 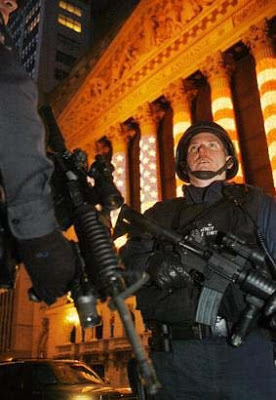 Too big to fail. Photo by Jennifer Szymaszek / AP / Noise Between Stations.

The ‘too big’ claim forms the rationale for the diversion of regular people’s money into rich people’s pockets.

As skiers and backcountry hikers know, a whiteout is a blizzard that’s so intense that those caught in it can’t even see the blizzard.

That’s how I think of the Wall Street bailout now swirling around us. So many trillions of our tax dollars are being blown at the financial giants that we’re blinded by the density of it, unable to see where we are or know what direction we’re headed.

However, one way to get your bearings in this bailout blizzard is to focus on the central point that both the bailors (Washington) and the bailees (Wall Street) keep pounding as an irrefutable truth that everyone simply has to accept — namely, the institutions being rescued are too big to fail.

Even sheep know to flee when coyotes howl in unison — and we commoners need to confront the absurdity of this “too big” claim, which forms the rationale for the entire diversion of regular people’s money into rich people’s pockets.

Wachovia, Merrill Lynch, Citigroup, Bank of America, AIG — omigosh, cried the Powers That Be, these behemoths are linked to every other behemoth, so if we don’t stuff them with tax dollars … well, we have no choice, because they’re just too big for the government to let fail.

Point No. 1: They have failed. They are kaput. It costs more to buy a snickerdoodle than to buy a share of Citigroup stock. AIG is 80 percent owned by you and me, the taxpayers. These once-haughty outfits are insolvent — wards of the state.

Point No. 2: If they’re too big, why should we sustain them? Let’s be clear about something the establishment doesn’t want you and me to understand — these giants did not get so big and interconnected because of natural market forces and free-enterprise efficiencies. They amassed power the old-fashioned way: They got the government to give it to them. In the past 20 years or so, they lobbied furiously to get Washington to rig the rules so they could latterly bloat … and float out of control.

A new report by Wallstreetwatch.org reveals that from 1998 to 2008, the finance industry made $1.7 billion in contributions to Washington politicians (55 percent to Repubs, 45 percent to Dems), spent $3.4 billion on lobbyists (3,000 of them on the industry payroll in 2007 alone) and won a dozen key deregulatory victories that led directly to today’s financial meltdown.

Inherent in the industry’s push for unbridled expansion was the unstated goal of guaranteeing that they would get taxpayer bailouts if things went badly. So many investors, businesses, employees and others would be hooked into these multitentacled blobs that government would be compelled to rescue the banks from their own excesses.

Knowing that they could privatize all of the profits from quick-buck schemes and socialize the losses, bankers were unleashed to do their damnedest. Which they did.

What to do now? Federal Reserve Chairman Ben Bernanke is calling on Congress to create a “super regulator” to control the irrational risks that the too-big boys take. Immodestly, Bernanke suggests that the Fed be this overseer. He is backed up by Timothy Geithner, President Barack Obama’s treasury secretary and point man on rescuing the giants. He has just outlined a new regulatory regime that he suggests we entrust to the Fed.

Bad idea all around. First, the Fed already has far-reaching watchdog authority that it refused to use as today’s crisis built up. We heard no bark and got no bite because, while the Fed has enormous public authority to regulate America’s money supply, interest rates and banks, it is governed by — guess who? — bankers, and it operates essentially as a private banking cartel.

The answer is to split their investment, banking and insurance functions into separate companies and reinvigorate America’s antitrust laws to restore competition in each of the three sectors of finance.

As Newsweek columnist Michael Hirsh put it in an online column in February, “We can’t have a free-market economy dominated by institutions so huge that they don’t have to play by free-market rules.”

[Texan Jim Hightower is a national radio commentator, writer, public speaker and author of the new book, Swim Against the Current: Even a Dead Fish Can Go With the Flow (Wiley, March 2008). He publishes the monthly Hightower Lowdown, co-edited by Phillip Frazer.]

1 Response to Jim Hightower : ‘Too Big to Fail’ Is Too Big, Period.