James Gardner was pure Old Austin, and a quintessential beatnik. 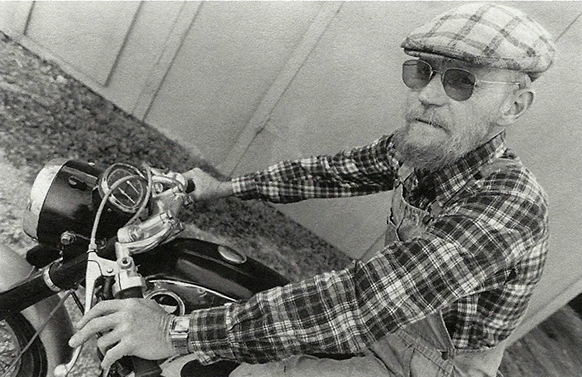 AUSTIN — One of Austin’s most distinctive, identifiable, and interesting citizens died a few weeks ago.

James Gardner had lived in Austin at least since 1958, the year I first met him. He was seated at a long table at Scholz’ Bier Garten wearing his lederhosen and all-German garb, drinking beer from a fancy ceramic beer stein he brought back from Germany. He had been in the Army and stationed in Germany where he became enlightened by German intellectuals he met in beer halls — his lifelong political identity was radical with no apologies.

It seems like he looked then exactly as he did when I last saw him two or three months before he passed. With a thin build and fully bearded face, he looked like no one I had ever seen before. Now when I think about James Gardner, the image that comes to mind is him sitting in proprietary mode in German gear at Scholz Garten circa 1958. It was a time when the University was so different, so much better than what it has become, and Austin was the best place to live on the planet.

I knew his then-wife Gwen through the Young Democrats, and through her I met James. This was a year before I moved to Austin to continue my education at UT and discovered a whole community of nonconformists. A community I felt more kinship with than any other I have known, before or since.

James was pure Old Austin. And to my mind, he was a quintessential beatnik. When we talked of this he did not disagree. We both felt there was something more authentic about the beats compared to the hippies, many of whom are now stockbrokers and corporate frontmen or shills.

But he was also a crazed motorcycle enthusiast who often sustained injuries in races. It was well-known and the subject of much head shaking. Gossip centered on detailed descriptions of his injuries. When I retired from law practice I bought a motor scooter, a moped. I called James to tell him. He chuckled and implied that sometime in the hazy future we might “ride together.” He did not say when such an honor might occur and it never did. A mere moped was not worthy. While I was honored by the prospect, I was relieved it did not materialize.

Sometimes I thought his occupation must be conversation, that lost art.

Sometimes I thought his occupation must be conversation, that lost art. James was pure Old Austin. And to my mind, he was a quintessential beatnik. But he actually spent his whole working life in the chemistry department of UT. Far be it from me to try to explain what he did. He had studied electrical engineering as a student and helped develop a device produced in the chemistry department that was shipped to universities and research facilities around the world.

James was 82 when he died from emphysema (or COPD, as it is called). He never quit smoking and drank beer until the end. But he was not a problem drinker. I knew him well through all these years and I never saw him obviously intoxicated, something I could not say for many of our friends.

I cannot remember a peace march or demonstration where I did not see him. He said the same thing about me. I know he was just as diligent about civil rights, labor, and poverty issues, because I saw him there, too. For some years he was a stalwart member of the Socialist Workers Party where he would not have seen me. Not that I disagreed with the SWP so much as I did not like meetings or long-winded political arguments, particularly about “theory.”

I did get into them sometimes, usually at Scholz Garten where James held forth frequently. This was more true of the ‘60s and ‘70s than later years. As I recall he had way back then an interest in Zen Buddhism. I never knew him to partake of drugs (making him a slightly unorthodox beatnik). In later years he became an unorthodox Methodist. At his memorial there was a handout that contained The Agnostic’s Creed, which comports with what I thought his views were.

He became good friends with the minister at Trinity United Methodist Church, Rev. Sid Hall, a cleric known for his progressive political views. Whether going to that church, if he did, or his friendship with Rev. Hall came first, I don’t know. He needed to have his mind engaged by some challenge.

James grew up in Stephenville and had ties to it all through his life. He married three different wives, one an old school chum, his last matrimonial foray and certainly the most bizarre. Apparently it broke up when neither of them could drive on highways anymore — she lived there, he remained a citizen of Austin.

A few months ago, I ran into James at Wheatsville Co-op. We talked for a few minutes, as old friends do. It was very difficult for him as he could not get enough breath to talk for long and his voice was low. When we parted we hugged which is not typical of our generation, among males especially. I could not ever remember hugging James. I did not know it then, but it was to be our last goodbye.

Read more articles by Jim Simons on The Rag Blog.