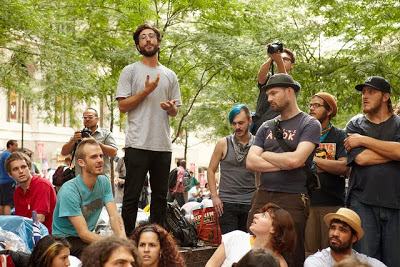 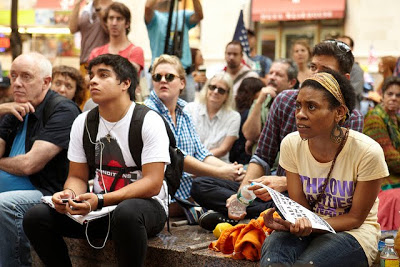 I left the meeting with a singing heart. I absolutely believe these marvelous young justice-seekers will change the world for the better.

NEW YORK — If you, like me, have concluded that today’s kids are practically a throwback to the Neanderthals, with their faces buried in video games instead of books or their fingers texting i-phone messages instead of tapping piano keys, conclude again.

I recently had occasion to attend one of Occupy Wall Street’s near-daily Direct Action meetings, and I’ve never been so impressed. There were approximately 30 or 40 people seated in a circle in a building near Zucotti Park. Almost all of them were very young, except for two or three middle-aged persons and this one old broad, me.

The meeting was conducted — no, that’s the wrong word, they don’t have leaders — facilitated by a young, probably college-age, girl. In a most efficient manner, she adhered to a beautifully conceived structure that provided for anyone to speak, in a carefully allotted and monitored amount of time, and then allowed for the group to respond quickly to their requests.

It was all incredibly civil and, by golly, MATURE. Actions were speedily arranged and points of contention were briskly resolved, courteously. Not a minute was wasted on irrelevant chatter. One couldn’t help wondering what it would be like to have these intelligent and purposeful young men and women dominating the Congress. Hopefuly, someday they will.

But, most of all, one was struck with the completely democratic way the youngsters managed their complicated agenda. A number of events were planned, fundamental decisions were made, and all without an iota of rancor or ego conflict. And, make no mistake. These kids are ideologically committed to building a better, more economically just society, but with political savvy befitting much older, more experienced elders. They mean business!

Heretofore, I had observed through my grandchildren that the new generation has made great strides in terms of prejudice. They have gay friends, and friends with different racial and ethnic origins. I have noted several of my grandkids railing against bias of all kinds. That, of course, is very heartening, but I was not aware of their generation’s stance on other social and economic inequalities… until I visited Occupy.

Don’t pay any heed to the Murdoch-controlled New York Post and other media entities that try to paint the Occupy movement as presided over by a bunch of hippie hoodlums. No, Occupy is composed of serious, dedicated, and truly democratic people.

Don’t pay any attention to Mayor Bloomberg’s rants about how badly Occupy is affecting the local businesses. I went into the atrium at 60 Wall Street across from the Stock Exchange last week, and its shops were humming with business.

Murdoch and Bloomberg are at the top of the one percent and have a vested interest in discrediting this grass roots movement sweeping the nation and the world. They know their days are numbered in terms of manipulating the system to increase their massive wealth to the detriment of the rest of us.

I left the meeting with a singing heart. I absolutely believe these marvelous young justice-seekers will change the world for the better. So, stop bemoaning the deficiencies of the younger generation, my aging peers. The future is in very capable and caring hands.