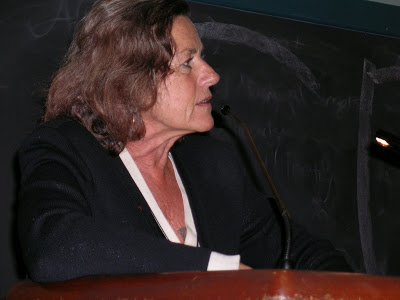 Who doesn’t have a reaction to the name and the reputation of Bernadine Dohrn? Is there anyone over the age of 60 who doesn’t remember her role at the outrageous Days of Rage demonstrations, her picture on FBI “wanted posters,” or her dramatic surrender to law enforcement officials in Chicago after a decade as a fugitive?

To former members of SDS, anti-war activists, Yippies, Black Panthers, White Panthers, women’s liberationists, along with students and scholars of Weatherman and the Weather Underground, she probably needs no introduction.

Sam Green featured her in his award-winning 2002 film, The Weather Underground. Todd Gitlin added to her iconic stature in his benchmark cultural history, The Sixties, though he was never on her side of the ideological splits or she on his. Dozens of books about the long decade of defiance have documented and mythologized Dohrn’s role as an American radical. Of course, her flamboyant husband and long-time partner, Bill Ayers, has been at her side for decades, aiding and abetting her much of the time, and adding to her legendary renown and notoriety.

Born in 1942, and a diligent student at the University of Chicago, she attended law school there and in the late 1960s “stepped out of the role of the good girl,” as she once put it. She has never really stepped back into it again, though she’s been a wife, a mother, and a professional woman for more years than she was a street fighting woman.

Since 1991, she has served as the director of the Children and Family Justice Center at the Northwestern University School of Law. At the same time, she has never been admitted to the bar in any state in the United States and has never practiced law. Her past might not haunt her, but it certainly has haunted character committees established by the legal profession to keep lawyers in line.

I first met Dohrn in the late 1960s when she worked for the National Lawyers Guild, and from afar began to follow her radical activities as reported in underground newspapers. It wasn’t until she was on the lam, a fugitive, and went by the name Molly that I spent days with her in discussion and debate about all the global and local issues of the 1970s, and began to see the woman behind the image.

She turned out to be much more vulnerable, nuanced, and sensitive than I had been led to believe. Since then, I have heard her speak at conferences, visited her in Chicago, and continued our conversation that began more than 40-years ago.

I don’t know any other woman of her generation who has been as controversial, as optimistic and hopeful, and as committed to what I’d have to call “political struggle” as she. The word alacrity fits her better than any other single word in my vocabulary.

While many of the men around her — her husband, Bill Ayers, her former Weatherman comrade, Mark Rudd, and her own son, Zayd — have written accounts of their experiences in, around, and after the revolution, Dohrn never has and perhaps never will. Probably someday someone will write her biography and attempt to reconcile what The New York Times described, in an article about her published in 1993, as “the seeming contradictions” in her life.

That author might also attempt to show how her own personal contradictions have reflected the larger contradictions of the society to which she belongs and at the same time has opposed, confronted, and aimed to reform as well as overturn. On the cusp of her 70th birthday, I asked her if she’d be willing to be interviewed. “Sure,” she said without missing a beat. “Love to have a reason to be in touch with you.” 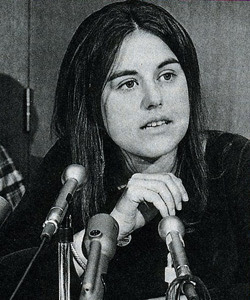 Bernardine Dohrn, a leader in the Weather Underground (originally the Weathermen) that grew out of SDS in 1969, was on the FBI’s most-wanted list for more than a decade.

What would you say is the predominant thread that runs through your life?

The great good fortune to have come of age at a time of revolutionary upheaval at home and abroad, which opened a path to lifelong justice and antiwar activism. The equally predominant thread is the joy and challenge of raising our children and now, grandchildren.

U.S. economic and social domination of the world is now obviously declining, although fierce military dominance continues to exercise a cruel grip. We now know that the damage done to the planet from unlimited plunder and exhaustion of oil, coal, and non-renewable resources may not be reversible. That reality weighs more heavily, perhaps, than the bomb in our childhood. As Dr. King said in 1967 — “the greatest purveyor of violence on this earth is my own country.” That gives us all a great responsibility.

How do you think living and working in Chicago has shaped you?

I’m such a Midwest gal, summer lightening over the lake, city-stopping snowstorms, the spirits of Ida B. Wells-Barnett, Jane Addams, Clarence Darrow, Gwendolyn Brooks, Studs Terkel — all the real deal, unpretentious and intrepid. Always an immigrant city but characterized by Black and white, and now Chicago has one million Mexican-Americans, plus newcomers from everywhere. Here, you can make a difference. Visiting the coasts and the south is essential but this is home.

What are your main impressions of Occupy Wall Street?

How have your feelings about Obama changed over the past four years?

The President was and remains a centrist, intelligent, compromising politician, first in Illinois and since in DC. As the highly financed hard right, finance titans, and the military machine have gained influence and consolidated power, politicians who try to occupy the center move right. Howard Zinn explains it perfectly, writing about JFK.

In what ways does this generation of protesters remind you of yourself and the young rebels of the 1960s?

They are smarter, more global, curious, courageous, and diverse, and open to elders at the get-go. But yes, they do remind me of our generation in their determination to act, to make meaning, to be smitten and inspired by Tunisia and Egypt, Madison and Greece, but to be local, to make art by shifting the frame of the possible.

Once upon a time we read Che, Mao, Marx, and Malcolm. Who do you read now that gives you insights and inspiration?

What lessons about an underground organization do you think are worth remembering now?

I have no idea. Maybe that what looks invincible and dominant can be also vulnerable.

Sexism, racism, imperialism seem awfully powerful today. What differences, if any did we make on the society?

We helped remind people that white supremacy is tenacious, takes new forms, and has not been uprooted. The big “we” could not end the Vietnam War, but our resistance helped limit U.S. military intervention options from 1975-1990. Ditto modest constraints on the FBI and CIA, totally unleashed since 9/11. And our progeny have transformed the world we know: women, LGBTQ, Native Americans, the disabled, environmental activists, new stirrings among labor.

Why do you think Americans are so docile and so deferential to the 1% that owns 99% of the wealth?

Not docile, I don’t think. Mad, cheated, scared, self-doubting, and envious. But also poking fun, using humor to ridicule the 1%, savvy about the naked theft. The trick is to avoid cynicism. Ordinary people have the wisdom but they don’t know they have the power.

You’re about to celebrate your 70th birthday. How has aging surprised you?

Are we really still on our feet? Aren’t you 35 Jonah?

I never understood why so many 1960s radicals became lawyers and judges. Can you explain that for me?

Lawyers, teachers, and midwives, I thought. Because we needed great lawyers and we cared about justice. Law’s a great place from which to fight the power. I still love our work of representing individual youth accused of crime and delinquency and working to downsize, close, and abolish the mass incarceration/prison system.

What is your most vivid memory of the 1960s?

Meeting with the Vietnamese in Budapest and Cuba. Grasping the gravity of our location and our responsibility.

[Jonah Raskin is a regular contributor to the Rag Blog and a professor at Sonoma State University. He was active in SDS and the Yippies in the Sixties. Read more articles by Jonah Raskin on The Rag Blog.]