‘Teardown’ has the kind of heart that once made Flint, Michigan, a center of trade union and labor activism. 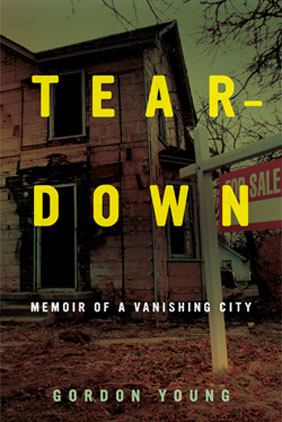 Teardown is a grim portrait with heart.

Gordon Young’s book about Flint, Michigan, Teardown: Memoir of a Vanishing City, might have been a depressing read. After all, the facts and the figures about crime and about poverty are likely to keep any sensible family from moving there. They might also persuade longtime residents to get out when they still can and locate somewhere else. Like San Francisco, where Young himself now lives.

Teardown has the kind of heart that once made the city a center of trade union and labor activism. There’s gritty humor in every chapter and whimsy in the wake of working class woes. So, while you might start to read Young’s book for the grim portraits he provides of urban decay you might well stick around for the eloquence and urgency of his prose.

“Officers no longer investigated burglaries in person,” he writes in a chapter on Flint crime that’s entitled “Psycho Killer.” He goes on to explain that “cars often stopped at red lights, except in the more deserted areas, then ran them if there was no oncoming traffic. Not a huge deal in the grand scheme of things, but it added to the general feeling of lawlessness in the city.” Young’s up-close look at the ordinary, daily occurrences of Flint life offers readers a sense of authenticity.

The book is constructed around a series of reoccurring contrasts: between gentrified San Francisco and ghostly Flint; Flint’s legendary past as a center of the U.S. auto industry and an inglorious present as a capital of the Rustbelt; and between the virtual city and its all-too real twin.

Part reportage and part memoir, the “conceit” of the book, if I can call it that, is the author’s relentless search for real estate to buy. His journey takes him into derelict neighborhoods and introduces him to politicians, priests, and the endangered species he calls the “Flintoid.” Skeptical and anti-romantic, Young doesn’t let nostalgia for the Flint he knew as a boy rise up and overwhelm him. In a city mired in racism that would be an exercise in unreality.

‘Teardown’ is all about decline, though now and then Young offers glimpses of beauty in the world of the broken-down.

Teardown is all about decline, though now and then Young offers glimpses of beauty in the world of the broken-down. And there’s a certain kind of joy in what he calls the “exuberant recklessness” of Flint. In a chapter called “Updates,” he describes the efforts of urban farmers to raise crops and rear barnyard animals. “Young people,” he concludes, are “trying to create a new reality.”

Those who might benefit the most from Teardown — the residents of Flint itself – might be among the least likely to read it. Then, again they might be flattered to know there’s a book about their distinctly un-Hollywood way of life.

I enjoyed it in part because it reminded me of the mad, mad Weatherman meeting I attended in Flint in December 1969, just as the Sixties were ending — at least on the calendar. Young remembers his own halcyon days of sex, drugs, and rock ‘n’ roll growing up in a city that workers built and that General Motors destroyed.

Teardown takes its rightful place next to Michael Moore’s documentary Roger & Me and Rivethead, by Ben Hamper, once a Flint native who no longer lives there. Indeed, it’s a curious place to visit and explore; perhaps a city where one feels in touch with an authentic America.

But who wants to live a life filled with nothing but authenticity? Not Roger Moore, Ben Hamper, or Gordon Young, all of them Flintoids with a sense of the absurd and the real. Heck, Flint is only 1,363 miles from Austin and the home of The Rag Blog. Anyone care to meet me there?