That’s what war does: demonizes the Other. 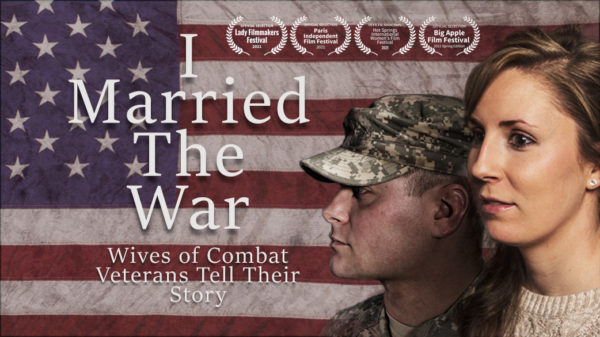 Almost all women whose husbands go to war inevitably become widows. Even those with husbands who come home from war alive. They become widows and survivors, too.

“I needed talking and feeling from him,” Anne Jackson says of her husband in the new documentary film, I Married the War. (Available on DVD; https://imarriedthewar.com/; and also to stream on Vimeo at https://vimeo.com/ondemand/imarriedthewar/579566962/)

Anne Jackson adds, “He was not really there.” Even when he was physically present and sitting at her side, her guy wasn’t there. No wonder she says that she felt “alone.”

Jackson is one of 11 women who are in front of the camera in I Married the War. The two filmmakers, Betty and Kenneth Rodgers, are a husband and wife team. He’s a Vietnam Veteran and a former U.S. Marine who survived the 77-day siege of Khe Sanh in 1968, the year it was clear the U.S. couldn’t win the war. Betty is also a veteran of that war, though she never set foot in Vietnam.

Betty and Ken met in 1984 and married in 1985. They now make Idaho their home. I Married the War is their second film. Their first is Bravo! Common Men, Uncommon Valor.

Almost everyone who lived through the Vietnam War
is a war veteran.

Almost everyone who lived through the Vietnam War is a war veteran. It battered all of us, the Vietnamese as well as the Americans, both the soldiers and the civilians.

The soundtrack to the film is by veteran blues and jazz singer, Sarah Baker. Her music doesn’t intrude, but rather enhances the sights and sounds on the screen.

For 98 minutes, the camera hugs the faces of the 11 women, listens to their every word and doesn’t moralize or sermonize. The women come from towns and cities and from urban and rural environments. They have white skins and colored skins. 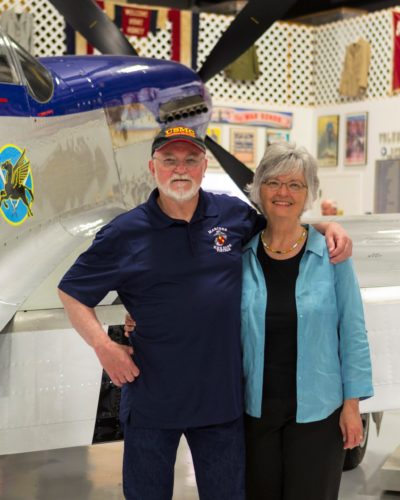 The women are working class and middle class. They all have one thing in common: war. Yes, Iraq is different from Afghanistan, and Afghanistan isn’t the same as Vietnam or Korea, and yet when all is said and done, when the guns are silenced and peace treaties are signed, they all belong to what’s been called “The Fog of War.”

When Francine Jones saw her husband get off the plane that brought him home from combat, she saw a different person than the man she knew who went away to fight.

If you add up the casualties of war, this documentary suggests, you have to calculate the emotional and psychological effects on the wives and on the families of the fighters as well as the soldiers themselves.

Bob Topmiller committed suicide after he came home from a distant battlefield. Before he ended his life, he carried guilt with him day and night.

Sally Zepeda’s husband was exposed to Agent Orange, suffered from cancer, wouldn’t eat or drink, and when he did, he explained, food tasted like foil and water like vinegar.

Precious Goodson’s husband was afflicted with Traumatic Brain Injury (TBI). “There were times when I thought ‘I’m done,’” Precious says. She persevered, and in the process learned about herself and became a wiser person.

Stacie Vaughan’s husband also suffered from TBI and wouldn’t talk about what he had done in Iraq. “You wouldn’t love me if you knew what I did,” he told her. “God wouldn’t love me.” Stacie isn’t a doctor, a nurse, a therapist or a health professional, but she decided on her own that her husband “had soul injury.” That sounds like the right diagnosis.

Laura Nickel joined the army and escaped largely unscathed, but not her husband who was injured by an Improvised Explosive Device (IED). For a time, they had to live separately to keep the peace between them. Motorcycles—hers and his—brought them together again.

Whatever it takes to get you through the day and the night!

Sally Jackson’s husband, who served in World War II, never could accept anyone from Japan and usually thought of them as “Japs.”

That’s what war does: demonizes the Other. War also brings together individuals and groups who once hated and aimed to kill one another.

Sally Jackson befriended some of those Others.

Sally Jackson befriended some of those Others.

“They’re my family,” she says. “I love Japanese people.”

The Rodgers’ film includes one Japanese-American woman, Anne Ohki, who was born in California in 1924 and who was interned in a “Relocation Center” in Colorado during World War II.

I Married the War doesn’t bill itself as a pacifist film, but for 98 riviting minutes, and in its own quiet way, it suggests that peaceful means are a better way to resolve conflicts between nations than wars.

I recommend Rodgers’ film to all Americans, whether they served in the military, in the “peace army,” or if they were too young to really understand why their fathers and their mothers put on uniforms, went overseas, fired weapons and were wounded, whether visible or invisible, in combat.

I Married the War won’t answer that perennial kid question, “What did you do in the war, dad?” But it will answer a lot of questions about what happens when service men and women come home with scars, aim to pick up where they left off, and find that it’s a lot harder than they imagined.

I Married the War adds significantly to an already large library of films that have looked especially hard at Vietnam, and that include Year of the Pig, Hearts and Minds, Regret to Inform, which is by a Vietnam war widow, and Daughter from Danang, about a Vietnamese-American woman who goes back to Vietnam to find her birth mother. They all tell vital parts of the big picture and reveal more about ourselves than perhaps we really want to know.