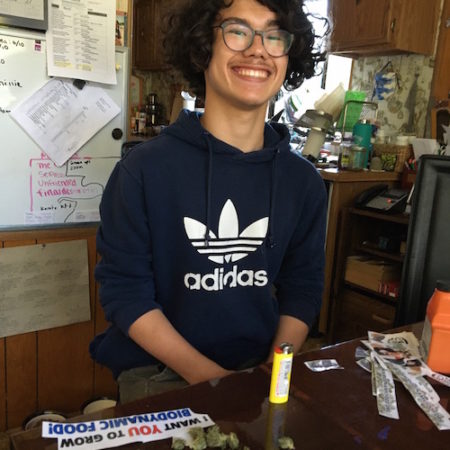 For three decades I taught college students in their teens and early twenties.

For three decades I taught college students in their teens and early twenties. I knew what TV programs they watched, what music they listened to, and what they wanted to do after graduation. Then I retired and lost touch with the very age group that had informed much of my thinking and fueled me, too.

To find out what teens were thinking and feeling now about George Floyd, Derek Chauvin, cop brutality, and race in America I sat down with a few teens at the house where one of them, a 16-year-old named Millie, lives with her white father and her Japanese mother. Two other teenagers, Gabriel and Colin, who are school friends of Millie’s, joined us for an afternoon conversation. In fact they were as eager to talk with me as I was to talk with them. 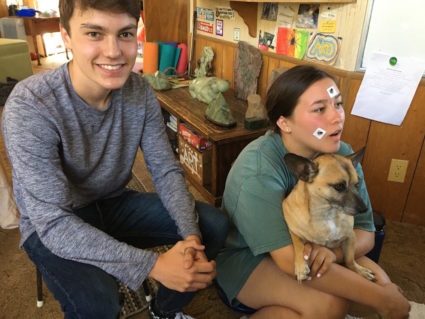 Gabriel and Millie. Photo by Jonah Raskin / The Rag Blog.

Like Millie, Gabriel and Colin have parents from different cultures. When asked to check a box they check “Other” and fill in the blank space. Like Millie, they say that adults rarely if ever ask them what they think and how they feel about social and political issues. “Even in school when teachers ask us our opinions, they don’t really listen and don’t really care,” Millie said. She added, “I think that people need to know what’s on our minds. After all, we’re the future.”

Gabriel Gutierrez just graduated from high school. He’s on the cusp of 18 and he’s probably the most articulate of the teens I spoke with. His mother is of Irish and Belgian descent and his dad is what he calls “whitewashed Mexican.” Gabe has read George Orwell’s 1984. He’s thought about power and he quotes Sir John Dalberg-Acton (1843-1902) who said famously in 1884, “Power tends to corrupt, and absolute power corrupts absolutely. Great men are almost always bad men.”

Gabe says, “If you give some people power over others you have problems.” Many, if not most, of his experiences with power have been at school, where he says, “I hated the structured system. It was depressing.” But he also has had experiences with what might be called “people power.” At the end of May 2020, he joined a thousand or so people who peacefully protested Chauvin’s murder of George Floyd. Some kids told other kids who had rocks and bottles not to throw them at the cops. No one did.

A handful of kids were arrested and taken to jail.

A handful of kids were arrested and taken to jail. The ingrates, who were described as “minors” by the local paper, complained about conditions in the county jail. The paper named no one. A reporter might have interviewed them and tried to understand why they protested. Calling them “minors” seemed to prove Millie’s point about adults ignoring her age group. Gabe echoed her views when he said, “People don’t ask us what we think about stuff.”

I spoke with Gabe a few days after that peaceful demonstration when some kids were arrested and when he was still exhilarated. “We flooded the streets,” he said. He wasn’t arrested, but about 75 kids were. They stayed in the streets after the curfew went into effect. The protests are something new and different in Gabe’s world, though they didn’t take him totally by surprise. “In history class we learned about MLK and also about Malcolm X,” he told me. His hero is Muhammad Ali because “he was successful and also because he was aware.”

Colin Kilpatrick says, “I learned about black folks from my dad. I have always been around them.” His mother, who was born in China and who became wealthy in the U.S., supports Trump. She wants Colin to grow up and become a doctor. “She’s a capitalist person,” he says. “She has never voted and doesn’t want to get involved in American politics.”

When I asked Colin why black people were routinely shot and killed by white cops he explained, “it’s deeply rooted in our culture. Cops are protected by the whole system and Trump reinforces their ideas.” Colin tends to be more pessimistic than Gabe and Millie. “It’s a Planet of the Apes situation,” he tells me. “With others you can do some real damage, but as a solitary person you are so small in the overall scheme of things.” He added, “I hope it doesn’t go out with a bang.”

Gabriel thinks that the political
situation will worsen.

Gabriel thinks that the political situation will worsen. “I feel like I have some leeway,” he said. “I have time to get a plan together.” Right now he’s working at a branch of In-N-Out Burger, near the bottom of the pay scale and far down from the guys “who actually flip the burgers and make real money.” Colin doesn’t work and feels guilty about not working and making money. His family money keeps him afloat, though his parents recently kicked him out of the house, perhaps in part because he’s a stoner and likes to take what he calls “fat rips.” His older brother took him in.

Whether Millie, Gabriel, and Colin are typical teenagers I can’t rightly say. They don’t see themselves as typical or average, don’t think of themselves as “extremists” and don’t want to become extremists, either. They have friends who they describe as “extremely passionate.” Many of their friends are skateboarders who have painted the letters “ACAB” on their boards. Millie explained to me that the letters stand for “All Cops Are Bastards.” She added, “What ACAB means to me is that cops work for a corrupt system. I see that a lot.” The French equivalent is “Tout le monde déteste la police.” (“Everyone hates the police,” though hip French speakers would call them “les flics.”)

When I was their age, I worried about nuclear testing and the atom bomb.

When I was the age Millie, Gabriel, and Colin are now, I worried about nuclear testing and the atom bomb. I knew about segregation and the civil rights movement, but I didn’t go into the streets to protest, In the mid 1950s no one in my age group did. A few years later, when I went to college in New York, it was a different story. I marched with friends to “Ban the Bomb,” and I picketed Woolworth’s because the company wouldn’t serve black people at lunch counters all across the South.

Once, when I marched for civil rights in the streets of New York, cops on horseback attacked us and broke up the crowd. I thought that was overkill, but I didn’t call cops “bastards.” Years later I would echo the Black Panther slogan “Off the Pig,” which now seems more extreme than any other slogan I have heard.

In the 1950s, when Eisenhower was president and Nixon was vice-president my peers were beginning to listen to rock ‘n’ roll and think of themselves as members of a generation apart from the generations who came before. Those were the days before there was something called the “Movement” and something else called the “Counterculture.”

Many of my peers have been in the streets again.

Many of my peers have been in the streets again to protest over the past month against the ongoing epidemic of police brutality. Millie, Gabriel, Colin, and their friends are beginning to see themselves as members of a distinct generation and as participants in a “movement,” though most observers over the age of 40 are unwilling to use that word to describe the current wave of street protests. “We are not millennials,” Gabe told me with real passion in his voice. He, Millie, and Colin belong to Generation Z. They’re at the end of the alphabet and much more than that.

Gabe says that his generation is already divided, with the “most passionate kids on one side and the least passionate kids on the other.” In 1960, when I was 18, I aimed to avoid passion. Though my parents were Marxists, I derived much of my political outlook from poets like Allen Ginsberg, who wrote, “America, go fuck yourself with your atom bomb,” and William Butler Yeats who exclaimed, “The ceremony of innocence is drowned/The best lack all conviction, while the worst/Are full of passionate intensity.”

In the late 1950s and early 1960s, we were supposed to be cool. The coolest thing we could say about something was, “It’s cool.” Today’s teenagers use much the same language. Millie told me, “I think the demonstrations and the protests are cool.” She added, “Every person counts.”

That statement is at the core of her sense of self, but in some ways she seems lost. When she thinks of her Japanese mother and the Japanese side of her family she says, “Asian cultures have real strong traditions.” When she thinks of her father and his parents, she says, “I don’t know what white tradition is.” White teenagers have often expressed much the same idea, which is one reason they turn to rap and other aspects of black culture.

I had to remind Mille that one of the tenets of white American culture, going back to Thoreau and the abolitionists and then forward to the present day and the protests against police brutality, is civil disobedience. “Oh, yeah,” she said with a smile on her face. “I know what that is. My dad practices civil disobedience. Cops don’t like that.” She got that right.