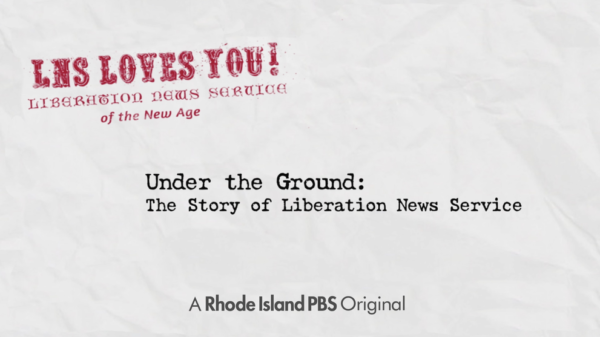 Dorothy Dickie’s fast-paced movie — which can be seen free on demand  — is haunted by memories of the 1960s. It’s also as timely as today’s newspaper headlines. Armed with archival footage and buttressed by in-depth interviews with the likes of Ray Mungo, Allen Young, James Retherford, Alice Embree, Harvey Wasserman, and Thorne Dreyer, Under the Ground explores both the counterculture and the movement which overlapped one another and also went their separate ways.

Rhode Island PBS director Dorothy Dickie has a subject that allows her to use all her many talents. LNS serves as a mirror of the nation itself that was split apart by the War in Vietnam and along racial lines that gave birth to the Black Panther Party and Nixon’s “Southern Strategy.”

Dickie’s emphasis is on LNS’s early years: the founding fathers; the big split that brought the press and the dissidents to rural Massachusetts; and Marshall Bloom’s suicide which takes place about midway through the documentary. There’s joy and sadness, utopian dreams and apocalyptic nightmares. The personal and the political merge.

In the film, someone calls LNS “guerrilla journalism.” Someone else calls it “gonzo journalism.” A third person calls it “participatory journalism.” Whatever one calls it, it clearly filled a void in the mass media, including radio and TV, that failed to report truthfully about Vietnam, Black Power, Student Power, Gay Rights, and Women’s Liberation. LNS reflected all the movements and the causes in the late 1960s and through the 1970s. In fact, in the group’s later years, the LNS staff collective always had a majority of women.

LNS enabled fledgling reporters and journalists to learn valuable skills that they translated into jobs that actually paid salaries. The news service helped others, like Thorne Dreyer and Alice Embree, keep alive the spirit of the underground press which shaped the thinking and the actions of college students, hippies, GIs, and vagabonds who came together at mega protests and at immense music festivals. Rag Radio continues the tradition. In fact, Austin’s New Journalism Project is a sponsor of this movie.

Ray Mungo is a delight on camera; full of humor and wonderful stories including one about being called “insufficiently militant” by Tom Hayden. Lowell Bergman is informative on the San Diego scene. Someone, I’m not sure who, says, “We didn’t want stars. It was a collective.” Yes, it was that, but some, like David Fenton, stood out more than the others. David’s photos preserve a time and a place. They’re also timeless and iconic.

I wasn’t part of the collective, but I wrote occasionally for LNS, hung out in the office, shared food, watched the nightly news, and collated and stapled packets that went all around the country and to places like Time, Newsweek, and The New York Times.

Did LNS help to change history and the world? Under the Ground suggests that it did. The LNSers on camera are mostly a modest bunch who have remained true to their youthful ideals and unwavering dedication. They’re no longer young and beautiful. But they exude a kind of wisdom that’s born of experience, struggle, and cooperation. Watching them and listening to them on camera I can understand why Dorothy Dickie wanted to preserve their stories and help tell them again and again. See it and believe.