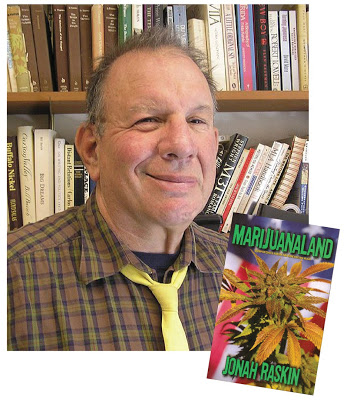 Pancake and Rye in ‘Marijuanaland‘

Jonah Raskin will be Thorne Dreyer‘s guest on Rag Radio on KOOP 91.7-FM (and streamed live on the Internet), Friday, 2-3 p.m. Also, please see “Jonah Raskin’s Marijuanaland” by Mariann G. Wizard and other articles by and about Jonah Raskin on The Rag Blog.

[The following is an excerpt from Jonah Raskin’s Marijuanaland: Dispatches From an American War, published by High Times Books.]

I had met Pancake and Rye in February and followed Pancake around for about eight months. (His brother, Rye, had other matters to attend to.) Pancake showed me their indoor and outdoor operations and talked almost without stopping about politics, pot, his two favorite authors — Tom Robbins and Kurt Vonnegut — and his all-time favorite TV show, South Park, which had played, he felt, a crucial role in his development.

Pancake went to work for his dad after graduating high school and learned how to grow legal flowers such as roses and zinnias. “For a while, I hated roses,” Pancake told me. “I once planted 2,500 bare-root roses, thorns and all, and after a while I began to call them ‘bastards.’” For cannabis, on the other hand, he had a real affection; the pot plants were his “darlings.”

During his teens and early twenties, he was in full-blown rebellion, he told me, against his parents, his family, and whatever else came along. He and Rye were both arrested for possession by a cop they knew from their high-school days, and who had never liked their irreverent style. The arrest didn’t deter them from their newfound mission: to grow the best marijuana ever.

Their parents were worried about them, and for a time the family came apart. Then they decided to turn on Dad; he started to smoke marijuana and enjoyed it, and felt pride for his sons who grew such unconventional flowers. The old father-sons rivalry faded away, and the family that smoked together grew closer.

“I started to grow pot when I was a teenager,” Pancake told me one day when we were driving around town in his battered station wagon. “Most of my classmates smoked — the honor-roll students and the auto-shop guys. I didn’t like the idea of buying weed from someone else; I wanted to be able to smoke my own pot — and then, after that, I wanted to make enough money by growing it to support myself.”

Pancake parked the car, and we went into a garden-supply store where he bought bags of fertilizer and a pair of clippers. Then, back in the car, he continued his tale.

“At the start, I was a guerrilla grower because I didn’t have land of my own,” he said. “I grew it in a creek bed in direct sunlight; I had to walk a mile or so to get to the site. I pumped water out of the creek and visited the garden every three to four days. I made enough money my first season to move out of my dad’s house, rent my own place and buy a car.”

One day in August, Pancake picked me up at my house and we drove together for about two hours to reach his garden, 1,600 feet above sea level, and also above the highest level of fog that rolled in from the Pacific. Before we left my place, I had shown him my pot, but Pancake was unimpressed. True enough, it wasn’t exactly commercial-grade.

Pancake and his brother were growing on a 40-acre parcel that their father owned. When I arrived, I noticed the American flag at the gate and another flag with the words “Don’t tread on me.” Pancake explained: “We’re libertarians — we believe in states’ rights. We want the federal government off our land and out of our lives.”

For protection, they had a few guns, but mostly they relied on two ferocious watchdogs, Nightshade and Mugwort. The dogs never took a liking to me, and I did not mess with them.

All around the hills and valleys, their neighbors were growing marijuana; the two brothers knew about these nearby gardens because they routinely scanned the landscape with binoculars and the gardens popped up — especially at the end of the season, when they were the only green around. “I was relieved to know my neighbors were growing,” Pancake told me. “That meant they had their own and weren’t going to poach my plants.”

Outlaw grape growers existed side by side with the pot growers in these parts. The grape growers did not bother with permits from the county and did not follow county rules and regulations; it was too expensive. Even if the grape growers were caught and fined, it would be less expensive than paying the necessary fees for the vineyards.

In addition to marijuana, Pancake and Rye grew vegetables and fruits: tomatoes, basil, pumpkins, apples, blueberries, grapes and corn. They had a grove of olive trees for olive oil. They installed solar panels for electricity and pumped water from a spring down the hill to a large tank uphill; gravity then delivered that water to their plants.

Self-sufficiency was their goal, and they were getting there quickly thanks to marijuana. Before long, their enterprise would be sustainable.

[Jonah Raskin‘s latest book is Marijuanaland: Dispatches from an American War, published by High Times Books. A communications professor at Sonoma State University and a former Yippie activist, Raskin has written about cannabis politics and culture since the 1970s. Raskin has authored a dozen books, including biographies of Abbie Hoffman, Allen Ginsberg, and Jack London. Read more articles by Jonah Raskin on The Rag Blog.]