Jordan Flaherty : Five Years After Katrina and Still Not Home 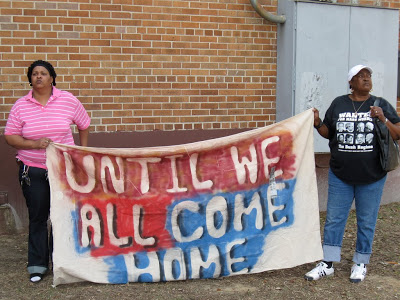 More than 100,000 New Orleanians received a one-way ticket out of town and still have received no help in coming back, and these voices are left out of most stories of the city.

NEW ORLEANS — Poet Sunni Patterson is one of New Orleans’ most beloved artists. She has performed in nearly every venue in the city, toured the U.S., and frequently appears on television and radio, from Democracy Now! to Def Poetry Jam. When she performs her poems in local venues, half the crowd recites the words along with her.

But, like many who grew up here, she was forced to move away from the city she loves. She left as part of a wave of displacement that began with Katrina and still continues to this day. While hers is just one story, it is emblematic of the situation of many African Americans from New Orleans, who no longer feel welcomed in the city they were born in.

Patterson comes from New Orleans’s Ninth Ward. Her family’s house was cut in half by the floodwaters and has since been demolished. Despite the loss of her home, she was soon back in the city, living in the Treme neighborhood. She spent much of the following years traveling the country, performing poetry and trying to raise awareness about the plight of New Orleans.

But her income was not enough — her post-Katrina rent was twice what she had paid before the storm, and she was also putting up money to help her family rebuild as well as preparing for the birth of her son Jibril. “I wound up getting evicted from my apartment because we were still working on the house,” she said. “In the midst of it, you realize that you are not generating the amount of money you need to sustain a living.”

Just as the storm revealed racial inequalities, the recovery has also been shaped by systemic racism. According to a recent survey of New Orleanians by the Kaiser Foundation, 42 percent of African Americans — versus just 16 percent of whites — said they still have not recovered from Katrina. Thirty-one percent of African-American residents — versus eight percent of white respondents — said they had trouble paying for food or housing in the last year. Housing prices in New Orleans have gone up 63 percent just since 2009.

Eleven billion federal dollars went into Louisiana’s Road Home program, which was meant to help the city rebuild. The payouts from this program went exclusively to homeowners, which cut out renters from the primary source of federal aid.

Even among homeowners, the program treated different populations in different ways. U.S. District Judge Henry Kennedy recently found that the program was racially discriminatory in the formula it used to disperse funds. By partially basing payouts on home values instead of on damage to homes, the program favored properties in wealthier — often whiter — neighborhoods. However, the same judge found that nothing in the law obligated the state to correct this discrimination for the 98 percent of applicants whose cases have been closed.

At approximately 355,000, the city’s population remains more than 100,000 lower than it’s pre-Katrina number, and many counted in the current population are among the tens of thousands who moved here post-Katrina. This puts the number of New Orleanians still displaced at well over 100,000 — perhaps 150,000 or more. A survey by the Louisiana Family Recovery Corps found that 75 percent of African Americans who were displaced wanted to return but were being kept out. Like Patterson, most of those surveyed said economic forces kept them from returning. 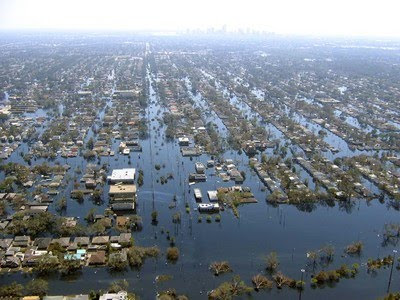 As New Orleans approaches the fifth anniversary of Katrina and begins a long recovery from the BP drilling disaster, the media has been searching for an uplifting angle. Stories of the city’s rebirth are everywhere, and there are reasons to feel good about New Orleans.

The Saints’ Super Bowl victory was a turning point for the city, and the HBO series Treme has gone a long way towards helping the story of the city’s trauma and search for recovery get out to a wider audience. Music festivals like Jazz Fest and Essence Fest, which are so central to the city’s tourism-based economy, have brought in some of their largest crowds in recent years.

But despite positive developments in the city’s recovery, more than 100,000 New Orleanians received a one-way ticket out of town and still have received no help in coming back, and these voices are left out of most stories of the city.

Advocates have also noted that among those who are not counted in the statistics on displacement are the New Orleanians who are in the city, but not home. They fall into the category that international human rights organizations call internally displaced.

The guiding principles of internal displacement, as recognized by the international community, call for more than return. UN principles number 28 and 29 call for, in part, “the full participation of internally displaced persons in the planning and management of their return or resettlement and reintegration.”

In the U.S., Katrina recovery has fallen under the Stafford Act, a law that specifically excludes many of these rights that international law guarantees.

Among those who are back in New Orleans but still displaced are members of the city’s large homeless population. In a report this week, UNITY for the Homeless estimated from 3,000 to 6,000 persons are living in the city’s abandoned buildings. Seventy-five percent of these undercounted residents are Katrina survivors, most of whom had stable housing before the storm. Eighty-seven percent are disabled, and a disproportionate share are elderly.

Sunni Patterson can’t remember a time when she wasn’t a poet. The words flow naturally and seemingly effortlessly from her. When she performs, it is like a divine presence speaking though her body. Her frame is small but she fills the room. Her voice conveys passion and love and pain and loss. Her words illuminate current events and history lessons — her topics ranging from the Black Panthers in the Desire housing projects to domestic violence.

You can hear Sunni Patterson’s influence in the performances of many young poets in New Orleans. And in the work of Patterson, you can hear the history of community elders passed along, the chants of Mardi Gras Indians, and the knowledge and embrace of neighbors and family and friends.

And Patterson is part of a large and thriving community of socially conscious culture workers. Since the late ’90s, you could find spoken word poetry being performed somewhere in New Orleans almost any night of the week. And many of these poets are also teachers, activists, and community organizers.

Although Patterson’s house had been in her family for generations, her relatives had difficulty presenting the proper paperwork for the Road Home Program — a problem shared by many New Orleanians. “We’re dealing with properties that have been passed down from generation to generation,” says Patterson. “The paperwork is not always available. A lot of elders are tired, they don’t know what to do.”

Now, like so many other former New Orleanians, she cannot afford to live in the city she loves. “I’m in Houston,” she says, seemingly stunned by her own words. “Houston. Houston. I can’t say that and make it sound right. It hurts me to my heart that my child’s birth certificate says Houston, Texas.”

One of the hardest aspects of leaving New Orleans has been the loss of her community. “In that same house that I grew up, my great grandmother and grandfather lived,” she says. “Everybody that lived around there, you knew. It was family. In New Orleans, even if you don’t know someone, you still speak and wave and say hello. In other cities, there’s something wrong with you if you speak to someone you don’t know.”

New Orleanians were displaced after the storm to 5,500 cities, spread across every US state. Although the vast majority of former New Orleanians are in nearby cities like Houston, Dallas, or Atlanta, many are still living in further locales from Utah to Maine.

While she is sad to be gone from the city, Patterson wants to see the positive in the loss. “The good part is that New Orleans energy and culture is now dispersed all over the world,” she says. “You can’t kill it. Ain’t that something? That’s what I love about it. So we still gotta give thanks, even in the midst of the atrocity, that poetry is still being created.”

[Jordan Flaherty is a journalist, an editor of Left Turn Magazine, and a staffer with the Louisiana Justice Institute. He was the first writer to bring the story of the Jena Six to a national audience, and his award-winning reporting from the Gulf Coast has been featured in a range of outlets including The New York Times, Mother Jones, and Argentina’s Clarin newspaper. He has produced news segments for Al-Jazeera, TeleSur, and Democracy Now! and appeared as a guest on CNN Morning, Anderson Cooper 360, and Keep Hope Alive with the Reverend Jesse Jackson. Haymarket Books has just released his new book, FLOODLINES: Community and Resistance from Katrina to the Jena Six. He can be reached at neworleans@leftturn.org.]

More information about Floodlines can be found at floodlines.org. Floodlines will also be featured on the Community and Resistance Tour this fall. For more information on the tour, see communityandresistance.wordpress.com.

Resources mentioned in this article: