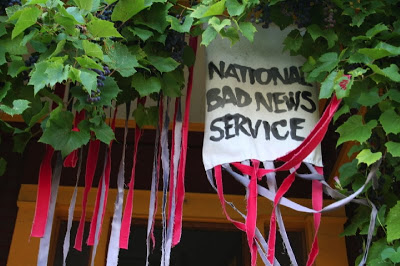 Dionysus reigns! Our front porch is overwhelmed with grapes red and white, leaves bristling out like mad conductor’s hair, fruit hanging in a wall of Eat Me.

The only trouble is that under those grapes are our signs listing the numbers of the dead — military and civilian — in Iraq and Afghanistan, the data output of our locally popular National Bad News Service, a neighborhood landmark, and source of urgent conversation.

Not that the autumn grapes are the only thing hiding those numbers. There is the year-round assault by language, the misdirection of “winning hearts and minds,” of Operation Enduring Freedom, of “bringing democracy” and the upgrade from Bush’s “War On Terror” to Obama’s more Harvard-y “Enduring Struggle Of The Forces Of Moderation Against Those Of Violent Extremism.” A fog of language as dense as the fog of war, year round, and thickening.

Yet rereading Thomas Pynchon’s 1973 masterpiece, Gravity’s Rainbow, I came across a passage that makes me think that our numbers themselves, in deep mid-winter, standing stark against red, clear and nasty as can be — are themselves false fronts for a reality more hideous even than war. In the context of WWII, Pynchon writes:

Don’t forget the real business of the War is buying and selling. The murdering and the violence are self-policing, and can be entrusted to nonprofessionals. The mass nature of wartime death is useful in many ways. It serves as spectacle, as diversion from the real movements of the War. It provides raw material to be recorded into History, so that children may be taught History as sequences of violence, battle after battle, and be more prepared for the adult world. Best of all, mass death is a stimulus to just ordinary folks, little fellows, to try ’n’ grab a piece of that Pie while they’re still here to gobble it up. The true war is a celebration of markets. (p.105)

It’s a little throwaway passage, a remark by one of the characters, not a thesis, not the point of the book, not some commie peacenik agit-prop. Just, oh, you know, the underlying truth.

I think I’ll add it to the explication of the numbers posted on one of our golden-yellow porch posts.