How a homegrown geek outsourced, downsized, and tax-breaked his way to the top.

Before he became the 15th-richest American, Michael Dell was hailed as a corporate wunderkind. His eponymous computer company’s “dazzlingly efficient” factory in Austin “may be the best hope of keeping blue-collar jobs in the United States,” proclaimed the New York Times in 2004. Recently, Dell Inc. has been better known for gobbling up federal contracts and pulling financial shenanigans to line its executives’ pockets — all while exploiting tax loopholes, outsourcing production, and laying off American workers.

19-year-old Michael Dell builds and sells computers from his University of Texas at Austin dorm room. He drops out, and by 1987 Dell Computer’s sales hit $60 million.

At 27, Dell becomes the youngest CEO to ever make the Fortune 500.

Dell Inc. builds its HQ in an Austin suburb, lured by sales-tax rebates, property-tax cuts, and $50 million in tax-free financing. Austin’s mayor calls Dell, known for his “made in the USA” computers, “a model corporate citizen.”

Dell and his wife, Susan, build a $30 million, 33,000- square-foot granite and stainless-steel mansion with eight bedrooms, a gym, an indoor pool, and (reportedly) 21 bathrooms. Dubbed “the castle” for its elaborate security, it’s appraised at $22 million; the Dells argue it’s worth only $6.5 million, and the county eventually settles at $12 million.

Feds fine Dell Inc. $50,000 for selling computers in Iran in violation of sanctions.

Michael Dell forms a private-equity firm, MSD Capital, to manage his family’s money. Today, their $12 billion in assets includes a $100 million collection of Magnum photos; Dollar Rent-a-Car; real estate in Hawaii, Mexico, and California; and the companies that run Applebee’s, IHOP, and Domino’s.

Dell Inc. opens a production and sales center in China, overseen by a subsidiary. By 2010, it has subsidiaries in 77 countries, including holding companies in tax shelters such as Bermuda and the Caymans that allow it to avoid at least $3.7 billion in U.S. taxes. In 2010, it paid an effective tax rate of 7.5% on its foreign income.

Dell Inc. gets an estimated $200 million in city and state incentives to build a factory in Nashville, Tenn. Three years later, half of the plant’s jobs are relocated to a nearby town, where Dell gets $6 million in tax breaks.

The New York Times declares Michael Dell the richest Texan ever. [He’s now No. 2; Walmart’s Alice Walton of Fort Worth edges him out.]

Dell buys two ranches outside Austin for an estimated $75 million. One gets its property taxes slashed 99.8% by claiming an agricultural exemption (proof: turkey feeders, birdhouses, and deer “habitat control”). Recently asked by Time about reducing his carbon footprint, Dell answered, “I’m sequestering way, way more than I’m using. I have a lot of land and a lot of trees.”

Dell and his wife give $250,000 to the Republican National Committee.

President Bush appoints Dell to his President’s Council of Advisors on Science and Technology, which warns that outsourcing is destroying the U.S. tech industry.

Dell builds a four-story villa on the exclusive Caribbean island of Anguilla.

The “Dell Dude” actor is busted for pot possession.

After heavy lobbying by Dell Inc., Congress passes the American Jobs Creation Act, which lets U.S. companies “repatriate” overseas profits at a one-time tax rate of 5.25%, rather than the normal 35%. The company brings home $4 billion.

President Bush: “It’s tough in a time of war, when people see carnage on their Dell television screens.”

Dell Inc. discloses that it’s been audited by the SEC, says it won’t reveal details of any “misconduct,” but revises four years’ worth of financials.

Dell Inc. says it’s doubling its factory and call-center staff in India to 20,000.

Michael Dell returns as CEO after a three-year hiatus. Less than six months later, his compensation exceeds $153 million, making him the sixth-highest-paid CEO in the U.S. His benefits include more than $1 million for security, second only to Oracle’s Larry Ellison.

By year’s end, Dell Inc. announces 8,800 layoffs, about 10 percent of its global workforce. 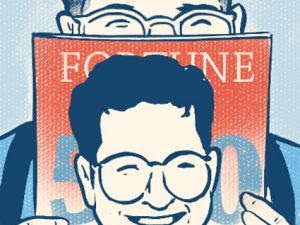 Customer service employees file a class-action lawsuit claiming that Dell Inc. routinely underpaid them. The case also is settled out of court.

Dell Inc. announces $3 billion in cuts, including the closure of an Austin plant, eliminating 900 jobs. It imposes a hiring freeze, offers buyouts, and asks workers to take unpaid days off.

Dell Inc.’s quarterly profits fall by nearly half; its shares have lost 80% of their value since 2004. The company announces another $1 billion in cuts.

Opposition by Michael Dell helps defeat a proposal that would require federal stimulus money to be spent on American-made goods. Dell Inc., the 43rd-largest federal contractor, now makes most of its computers abroad.

Lebanon, Tenn., threatens to sue Dell Inc. for eliminating 700 of the 1,000 jobs it had offered as part of a tax deal. Dell Inc. then shutters its last large U.S. factory, in North Carolina, and sends its 900 jobs abroad.

Michael Dell’s MSD Capital and other investors buy the remains of the failed IndyMac Bank from the FDIC, putting up $1.3 billion for a $158 billion mortgage-servicing portfolio. The FDIC, which expects to lose up to $9.4 billion on the deal, promises to reimburse the investors for their potential losses. By year’s end, the new bank has made $700 million in profits and a New York judge excoriates its “harsh, repugnant, shocking, and repulsive” practices.

Michael Dell’s net worth hits $14.5 billion. He bills his company $4 million for using his private jet, reportedly the priciest flying habit of any public company’s CEO.

Dell Inc. announces a “flagship” factory and customer center in China that will employ 3,000. It plans to spend $100 billion in China over the next decade. Foxconn, the Taiwanese company that makes many Dell PCs, erects suicide nets around its dorms’ roofs after 12 workers jump to their deaths.

White House seeks to end a tax loophole that has let Dell Inc. save $546 million in three years by transferring patents and other properties to foreign subsidiaries. According to Bloomberg Businessweek, Dell lobbyists targeted the plan; the company denies it.

Dell Inc. discloses that it’s received nearly $1 billion in “tax holidays” from governments around the world in the past three years.

By the end of 2010, Dell Inc. shares have gained nearly 80% from February 2009’s low. Michael Dell tells Reuters that one of his biggest problems is finding skilled American workers: “I want to put a massive ‘we’re hiring’ sign out.”

[Josh Harkinson is a reporter for Mother Jones, where this article first appeared.]