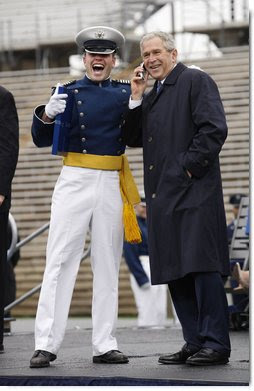 During a speech held at the graduating ceremony of the Air Force Academy cadets, U.S. President George W. Bush said the war waged by America in Iraq and Afghanistan is a “great struggle” and compared it with World War II, The New York Times reported.

Considering the fact that the WW II was regarded by many world leaders, military chiefs and historians as “the war of all wars” or “the war to end all wars” – let’s hope they were right at least on the first one – Bush’s assertion is in a very strong contrast with another one in which he said the U.S. military wasn’t exactly prepared for the aftermath of the first stages of the war.

In his speech, Bush warned that the only way the United States could lose the war is if it defeats itself. He warned the nearly 1,000 graduates against those who would waver in the war struggle.

The President said a 21st century war is won not only through arms but more important, through the power of will.

“And we need to recognize that the only way America can lose the war on terror is if we defeat ourselves,” said Mr. Bush, who described the current situation of the war as a “battle of wills.”

The strategy of United States’ current enemies is to cause it to lose nerve and “retreat before the job is done”, said the President. He exemplified the situation using the experiences of Germany and Japan, which were defeated by the U.S. in WW II only to later become democratic states and allies.

“Today, we must do the same in Afghanistan and Iraq,” Mr. Bush said.

This entry was posted in RagBlog and tagged Bush, Military. Bookmark the permalink.