Junior’s Reality Is One We Don’t Comprehend

I’m through with masking the truth. It is time to publicise in vivid red, white, and blue the horrible consequences of this illegal, immoral, unconscionable war in the Middle East. When you finally become sick enough of seeing these graphic, real images of what happens in combat, perhaps some of you will finally begin to do something concrete and active to stop this war. 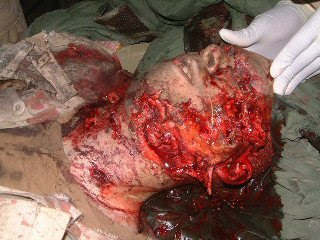 WASHINGTON (April 10) -President Bush on Thursday ordered an indefinite halt in U.S. troop withdrawals from Iraq after July, embracing the key recommendations of his top war commander. Bush said that Gen. David Petraeus will “have all the time he needs” to consider when more American forces could return home.

Bush’s decisions virtually guarantees a major U.S. presence in Iraq throughout his term in office in January, when a new president takes office.

In another major decision, the president announced he will seek to relieve the heavy strain on the Army by reducing the length of combat tours in Iraq and Afghanistan to 12 months, down from the current level of 15 months. He said the change would take effect on Aug. 1, and would affect U.S. forces already deployed on the front lines.

Bush said U.S. force have made major gains since he ordered a buildup of about 30,000 U.S. forces. “We have renewed and revived the prospect of success” the president said.

Bush delivered his remarks in the Cross Hall of the White House before an audience of veterans’ service groups and Vice President Dick Cheney, Defense Secretary Robert Gates and Secretary of State Condoleezza Rice.

The president’s decision had been foreshadowed by two days of testimony before a skeptical Congress by Petraeus and Ryan Crocker, the U.S. ambassador to Baghdad. Now in its sixth year, the war has claimed the lives of more than 4,000 U.S. troops and cost more than $500 billion.