Just As the Hangman Partners with the Condemned Man 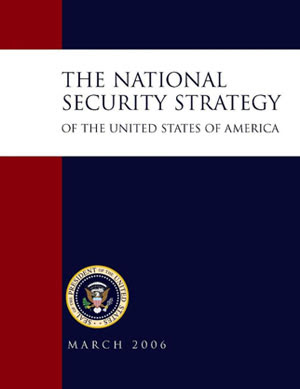 Saving the World to Save Some of Ourselves
By Case Wagenvoord / August 16, 2008

The NSS leads with that fundamental biblical truth, “Economic freedom is a moral imperative,” even if some must die so we can protect it. The right to own property is fundamental to human nature (our kind). Economic freedom promotes social stability by keeping the masses so impoverished and weakened that their sole concern is survival, not political agitation.

Free governments govern their states through the marginalization of the poor, which is why the best form of government is Authoritarian Democracy in which a free people freely elect the tyrant of their choice.

The NSS proposes a new Cold War whose aim is to spread Authoritarian Democracy to the world. Condi calls it “transformational democracy.” She elaborates by adding, “The fundamental character of regimes now matters more than the international distribution of power.”

So it’s in with paranoia and out with the balance of power diplomacy that has governed international relations since the Peace of Westphalia. It matters not that the world is against us as long as it’s our kind of world.

We don’t oppress; we partner, just as the hangman partners with the condemned man.

We must muster all of our assets for the struggle to come, from our missiles to our tanks to our prisons to our waterboards to our electrodes. Ours is the noblest mission the world has seen since the Europeans spread Christianity with the rack and the stake.