Ken Wachsberger :
Reflection on the election: The Yippie
Puke-In of 1972

‘They can’t beat us. We’re having too much fun.’ — Stew Albert 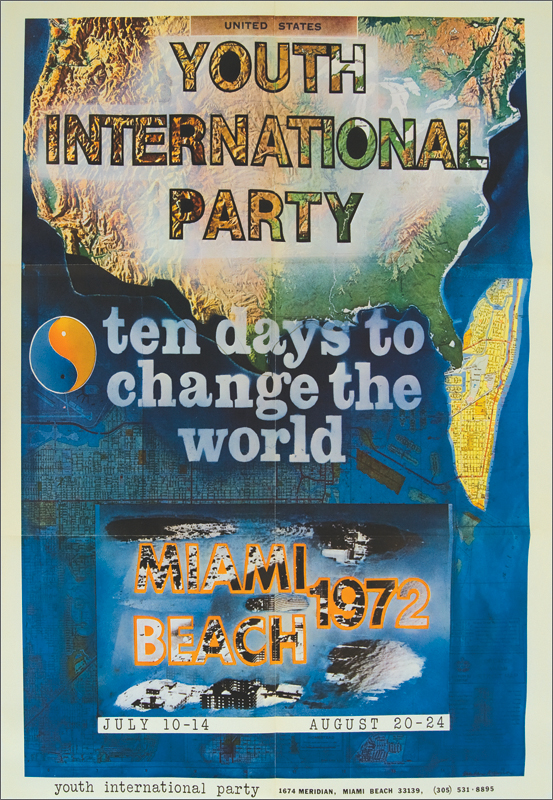 Yippie poster. Image from Gotta Have Rock and Roll.

I’m trying to be positive but I’ll be honest. I get queasy sometimes.

Trump called himself the law-and-order president. He was clear about his intentions. He’s already attacking the First Amendment. If he’s going to bring back the Nixon years, we’ll have to dip back into our sixties’ attitudes and remember how we beat Nixon — because, although it took a long time and a lot of us suffered, we did beat him.

The legendary Yippie Stew Albert knew we would all along and he taught me how. “They can’t beat us,” he said. “We’re having too much fun.”

Stew was walking beside me. I was on my way to an early lunch the morning of the Yippie Puke-In of August 1972.

The Democrats and Republicans both held their presidential nominating conventions in Miami Beach that summer and young radicals, freeks, hippies, Yippies, and Zippies of every left-wing focus group were there to protest the Vietnam War, advocate for their favorite causes, and get as high as they could as often as possible. We didn’t favor either party because both were complicit in perpetuating the war so we protested both parties while we partied.

The Yippies and the Zippies were the youngest, zaniest, most idealistic segment of the Movement.

The Yippies and the Zippies represented the youngest, zaniest, most idealistic, and funniest segment of the broad mosaic of voices that was the antiwar Movement. We were media-driven guerrilla theater actors when the idea was new. In fact, we popularized the idea of playing to the media. Yippie founders Abbie Hoffman and Jerry Rubin were there along with other key first-generation Yippies who already had become mythical characters as defendants and supporters in the 1969 Chicago conspiracy trial.

Stew Albert was one of those mythical first-generation Yippies, a co-founder, in fact, and a brilliant activist theoretician. If he was lesser known than Abbie and Jerry by the general public, it was only because he didn’t stand trial. During the summer of 1972, when we of the second generation were still coming of age, Stew was there often, giving generously of his name, his energy, and his vision to the cause.

The Yippie Puke-In was held in front of the Fontainebleau Hotel after the cops chased nine of us out of the hotel on the day the Republican National Committee was slated to meet there. Following the meeting was a reception, the perfect venue, we decided, to show Richard Nixon and the Republicans how sick their policies made us feel.

A pharmacist had sold us each a bottle of Ipecac, a non-prescription medicine that induces puking.

The day before, a pharmacist had sold us each a bottle of Ipecac, a non-prescription medicine that induces puking for those who need such an outcome. He told us it would take about five minutes to take effect.

On our way to the hotel the next day, we met at a pizza joint for Cokes and pizzas with green pepper, sausage, and extra cheese. Once we got to the hotel, we figured it would take about five minutes to sneak into the hotel and position ourselves outside the meeting room so we could meet the delegates on their way to the banquet and serve them the appetizer that we were about to prepare for them. We chugged the contents, snuck around the hotel, and entered from a side door.

Unfortunately we were now the only ones in the hotel dressed in cutoffs and T-shirts. The Secret Service agents couldn’t figure out who we were so they trailed us from behind. When we got to the meeting room, a suspicious guard asked us to show our room keys. We started fumbling around in our pockets like we couldn’t find them. Then we noticed the Secret Service agents, and the guard started shouting, “Out, out,” so we split immediately before they could nab us.

Media from around the world were
capturing every detail.

Outside the hotel, a group of Zippies were demonstrating for a righteous cause that I don’t remember. A woman was shouting chants into a megaphone and the crowd was repeating them. Media from around the world were capturing every detail, to be broadcast on the evening news.

But I figured we couldn’t have long to wait before the Ipecac took effect on at least one of us, so I borrowed the megaphone from the woman. Then I turned to the crowd and the cameras and I said:

People, I have an important gut-level statement to make. We’re from the People Uptight about Killings Everywhere (PUKE) and we want to talk to Richard Nixon and to all you Republican Fat Cats. We want to tell you that we’re tired of your lies and your deception. You promised us jobs and you gave us the wage-price freeze.

The cameras were on me the whole time. I kept looking to the side to see if anyone was beginning to look nauseous. Everyone just looked befuddled so I kept talking:

You’ve wired all our phones so we can’t even make a private call. And now you’ve just finished your National Platform Committee meeting, where we all know you made plans to bring us more CIA heroin, more bombed dikes, more drowned babies, more napalmed innocent citizens.

I could see him turning pale and starting to gag.

And then I caught a glance of the one guy in our group who we thought might be an undercover cop. He might have been but he was the hero that day. I could see him turning pale and starting to gag so I led into my conclusion:

And now you celebrate. Feast. Banquet. Eat all you want — you can afford it. After all, it was paid for with our tax dollars. But don’t ask us to join you; we’ve eaten enough of your shit.

The cameras were all on me watching my every move, so I pointed my finger at the focal point of the whole camera crew and said as I waved it angrily:

My finger drew an arc from where it was to our hero’s stooping figure. The cameras followed.

… we’re just sick about it.

Another Yippie lost it, and the cameras turned to her. Then another. Then another. Between the nine of us, we puked for a half hour, and every time someone heaved, someone else grabbed the megaphone and gave another reason why the Republicans made us sick. The cameras had a field day. But then the editors got hold of the stories and censored the whole event. The Miami Herald gave us one word: “disgusting.”

I couldn’t figure it out. What Richard Nixon and the Republicans did every day was far more disgusting and they got all the press they wanted.

Laugh. Laugh often. Cry a lot, too. If you’re sane, how can you not? But laugh more.

[Ken Wachsberger is the editor of the Voices From the Underground Series. He is an author, editor, and book coach.]

7 Responses to Ken Wachsberger :
Reflection on the election: The Yippie
Puke-In of 1972