Know Your Candidates and Their Endorsements

I agonised about posting this article, but I feel it is important to relate the facts without bias. There is another article below from McClatchy that suggests that the endorsement from Powell is not just an average endorsement. This is an important issue. 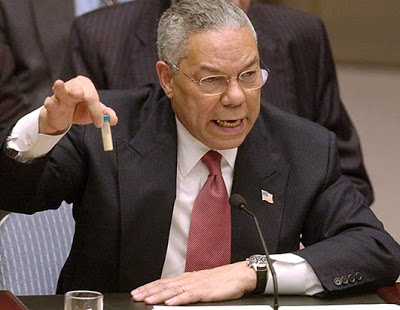 Come, let’s away to prison:
We two alone will sing like birds i’ the cage:
When thou dost ask me blessing, I’ll kneel down,
And ask of thee forgiveness: so we’ll live,
And pray, and sing, and tell old tales, and laugh
At gilded butterflies, and hear poor rogues
Talk of court news; and we’ll talk with them too,
Who loses and who wins; who’s in, who’s out;
And take upon’s the mystery of things,
As if we were God’s spies: and we’ll wear out,
In a wall’d prison, packs and sects of great ones,
That ebb and flow by the moon.

Democratic Party circles are in raptures over Colin Powell’s endorsement of Barack Obama. One can see the heavily-blinkered logic behind their elation; now that our national politics has been reduced to a petty squabble over spoils among shifting factions in the imperial court, a nod from a consummate courtier like Powell is indeed a glittering prize for an ambitious prince.

But out in the real world, where the operations of imperial power have left smoking trails of murder and ruin across the globe, the “endorsement” of a man who played an indispensable role in the slaughter of more than a million innocent people in a war of Hitlerian aggression should be regarded as a thing of shame, and vociferously rejected by anyone with a scintilla of honor or morality.

In fact, it is not too much of a stretch to say that Colin Powell is more responsible for the mass murder spree in Iraq than any other person except George W. Bush, who gave the actual order for the hit. For it was Powell who “made the sale” for the Bush Faction’s deceitful warmongering campaign, with his infamous February 2003 presentation to the UN, laying out the false evidence about Iraq’s non-existent weapons of mass destruction. After that farrago of artfully delivered lies, the American Establishment – urged on by the fawning, bloodthirsty commentariat – lined up solidly behind the war. After all, if Colin Powell – so “reasonable,” so “honorable,” so “honest” and “bipartisan” – stood foursquare behind the Bush case for war, then it must be ironclad.

This was, again, the logic of courtiers, with little connection to reality. Powell’s reputation as a wise, moderate, impartial statesman – the very thing that made him the most effective shill for the war crime in Iraq – was itself almost entirely a fiction. By the time he made his shameless UN appearance, Powell had already spent almost four decades as a bagman – and frontman – for some of the most vicious and ugly elements in American politics and government. From the My Lai massacre to Iran-Contra, from Washington’s long and murderous collusion with Saddam to its long and murderous campaigns to remove him, Powell has been instrumental in perpetrating or covering up atrocities and abominations on a gigantic scale. [For details, see Robert Parry’s investigation, “The Truth About Colin Powell.”]

Since his departure from the Administration – after staying on long enough to see Bush reconfirmed in power – Powell and his legion of apologists have peddled the myth that he was “stabbed in the back” in his UN presentation: given a false bill of goods with assurances they were true, misled and manipulated by incompetent intelligence analysts and Machiavellian White House insiders, etc., etc. Such stories may help Powell sleep better at night, and they have certainly helped rehabilitate his fictional reputation to the extent that his endorsement is once more considered a worthy prize. But they suffer from one small defect: they are blatantly false.

Powell knew – knew beyond a shadow of a doubt – that he was offering rank lies, cooked intelligence and dubious assertion to the world at his UN presentation before the war. Earlier this year, Jonathan Schwarz provided a devastating demolition of Powell’s UN testimony, showing how it was belied at almost every point by the actual intelligence reports – which Powell had read before the presentation. Powell knew the case for war against Iraq was riddled with holes – holes patched with outright fabrications and the knowing manipulation of data. He presented it anyway; he made the sale. And a million innocent human beings have die for it.

But Powell was selling aggression against Iraq long before his UN fan-dance in February 2003. In fact, he was the mouthpiece that the Administration used in May 2002 – even before the White House began to “roll out the product” of a concentrated warmongering campaign – to signal Washington’s firm intent to invade Iraq even if UN inspectors went into the country and found no weapons of mass destruction. The cat of war crime was out of the bag – and out in open – in the spring of 2002, and it was Powell who untied the strings.

Quietly, without fanfare, in a bland statement issued by its most “moderate” front man, the Bush Regime crossed another moral Rubicon last week, carrying the once-great republic they have usurped deeper into the blood-soaked mire of international criminality.

The move – committing the United States of America to a policy of Hitlerian military aggression – was little noted at the time. A quick soundbite, maybe, on a couple of the more wonky TV news shows; a brief quote buried somewhere in the thick gray sludge of the “serious” papers. The Regime guaranteed its poison pill would go down sugarcoated by picking Secretary of State Colin Powell as its mouthpiece.

It was a masterstroke of propaganda, really. The former general has long been regarded by the “serious” media on both sides of the Atlantic as a “moderate” maverick on Bush’s hard-right team. Liberal commentators praise Powell as a “restraining influence” on more bellicose insiders like Cheney and Rumsfeld, and a wise, guiding hand for a president unschooled in the subtleties of world diplomacy.

It’s all a sham, of course. Powell is nothing more than a lifelong bagman for powerful interests. His willingness to play ball, to look the other way, has made him a convenient tool for the some of the most violent and undemocratic forces ever to pollute American society.

His first job on the Inside was an attempted whitewash of the My Lai massacre in Vietnam; it didn’t quite work, but he won points for his obfuscatory efforts and went on to a plum job in the crime-ridden Nixon White House. Then came Iran-Contra, the criminal conspiracy of drug-running and terrorism operated directly out of the Reagan-Bush White House. Powell illicitly sent missiles to the terrorist regime of Ayatollah Khomeini, then helped with the ensuing cover-up. For this service, he was made head of the entire U.S. military.

He then directed the illegal American aggression against Panama, when President George H.W. Bush killed hundreds, perhaps thousands of innocent civilians in a hissy fit against his old CIA employee Manuel Noriega. Powell, like Bush, had long known Noriega was a murderous drug dealer, but they found him useful, and plied him with plaudits and cash – until Bush needed to prove his tough-guy cojones to Reaganite critics in the Republican Party….

So what better man to announce George W. Bush’s adoption of Adolf Hitler’s moral code? Powell sat down with the media sycophants on ABC’s “This Week” and calmly – moderately – laid out the new doctrine. The subject, of course, was Iraq. The UN was working on a deal that would allow international inspectors back into the country to verify that Saddam Hussein no longer possessed weapons of mass destruction.

These inspections were vital because, as George W. never ceases to remind us, Saddam Hussein is so evil that he “gassed his own people.” …But Junior always omits the inconvenient fact that one year [the attack], Daddy Bush signed an executive order mandating closer U.S. ties to Saddam’s regime. Daddy Bush showered Saddam with endless financial credits and mountains of “dual-use technology” – which the dictator duly used to develop his WMDs – right up until the day before Iraq’s invasion of Kuwait. Needless to say, Powell, as head of Daddy’s military, was complicit in this lunatic operation and raised no demur, “moderate” or otherwise.

Flash forward to the present day. Junior Bush is now in the White House. For months, he has threatened military action against Iraq if Hussein fails to verify the destruction of his WMD capacity. (At the same time, of course, Junior undercuts international treaties that would require monitoring of his own biochemical warfare facilities. There’s a good reason for that: the Regime is now preparing to develop offensive biochemical weapons, in contravention of international and U.S. law, the Village Voice reports.)

The world braces for another conflagration in the Mesopotamian sands. But then Saddam blinks. He starts talking with the UN. He renounces aggression. He tries to make up with Kuwait. Sooner or later, the inspectors will go back in – no cause for war now, right?

Wrong, Powell told the sycophants last week. The “moderate” secretary said that even if UN inspectors go in and verify compliance, the Bush Regime still “reserves its options” to do anything necessary, including military invasion, to effect a “regime change.” Bush himself has already acknowledged that nuclear force is among those “options.”

So there it is. The United States now openly claims the right to launch an all-out attack on any nation in the world whose regime it doesn’t like – even if that nation is not engaged in active military aggression or terrorism – and even if the mere threat of aggression has been defused by UN monitoring.

No provocation necessary. No legality required. Just a thuggish elite raining death on the world, for profit and power, sowing hatred for the once-great nation they have hijacked – and ensuring more death and terror for its people.

This then is the bloodstained hand that Barack Obama has clasped so warmly, so triumphantly, on his march to power. As for Powell, he has proven himself once more the ultimate courtier. In the latest intramural tussle in the imperial court, his keen and practiced eye has picked out the coming man – and so he has jettisoned the faction he has served for so long, and latched on to the winning side yet again. (As he did previously for a while with Bill Clinton.) And why not? Powell has always been a faithful servant of America’s militarist empire – no matter who its temporary manager might be.

Chris Floyd is the author of Empire Burlesque: The Secret History of the Bush Regime.

3 Responses to Know Your Candidates and Their Endorsements