I have yet to hear or read a persuasive rationale for anyone in civilian life needing an assault weapon. 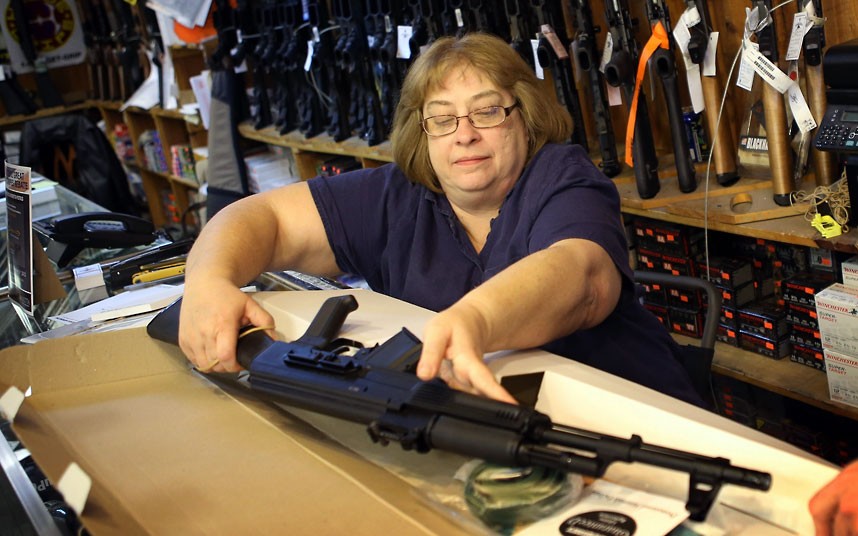 Come and get it! Assault rifle for sale at Illinois sporting goods store. Photo by Scott Olson / Getty Images.

The recent mass killings at the offices of the French publication Charlie Hebdo brought to mind what I learned on a trip last summer while traveling around rural upstate New York with my wife. We noticed a good many yard signs demanding the repeal of the SAFE Act. As soon as we could get internet access, we checked out what these signs were about.

We learned that in December 2013, the New York State Legislature decided that some new gun regulations would make the state safer for its citizens and visitors. It passed the New York Secure Ammunition and Firearms Enforcement Act of 2013, referred to as the NY SAFE Act.

Perhaps the most controversial provision in the SAFE Act is the limitation of magazines to seven rounds. Since most magazines are made for 10 or more rounds, a federal district court in New York found that the seven-round limit on magazines was “an arbitrary restriction,” and overturned that portion of the law under the Supreme Court’s opinion in District of Columbia v. Heller (2010). It also found the act’s description of semi-automatic pistols with detachable magazines that are versions of automatic guns as unconstitutionally vague, along with the provision banning “muzzle breaks.”

[A muzzle brake, which has many designs, is attached to the end of the barrel of a firearm to help control the tendency of the barrel to move upward after firing because of gasses that are emitted from the round. The meaning of “muzzle break” is not clear.]

The district court found that most of the New York SAFE Act was constitutional.

Otherwise, the district court found that most of the New York SAFE Act was constitutional because its provisions “further the state’s important interest in public safety… [do] not totally disarm New York’s citizens; and [do] not meaningfully jeopardize their right to self-defense.”

From the day the act was passed just over two years ago, it has been under attack by those who oppose almost all gun regulation, though it is clear that the Supreme Court has never prohibited reasonable regulation deemed to make our society safer from gun violence.

This past election, the SAFE Act was used to attack many candidates for the New York Legislature with the aim of repealing the SAFE Act. A few SAFE Act supporters were defeated at the polls, but legislative action to repeal the law seems far in the future, if ever. And the other legal challenges to the law do not seem likely to result in its being overturned, though its poorly-drafted provisions should be.

I’ve tried to understand the objections to the constitutional provisions of the act, but I have been unable to comprehend why so many gun owners in New York are apoplectic about the act’s regulations. I am a gun owner. Not one of the remaining provisions found to be constitutional would interfere in my right to own and use guns.

A primary purpose of the SAFE Act seems to be to keep guns out of the hands of people who are likely to pose a threat to law-abiding citizens or make it easier to remedy this problem when it occurs. An equally important purpose of the act is to prohibit future purchases and sales of assault weapons. Since I don’t own such a weapon or want to own one, even if I lived in New York, this provision would not affect me. For those people in New York who do want to own an assault weapon, I can understand that this law makes their desire problematic.

I can’t imagine that a drug cartel is likely to start roaming our neighborhoods intent on killing me or my neighbors.

I would like to be reasonable about assault weapons, but I have yet to hear or read a persuasive rationale for anyone in civilian life needing an assault weapon. I can’t imagine that a drug cartel is likely to start roaming our neighborhoods intent on killing me or my neighbors. Likewise, I’m not aware of gangs engaging in the same behavior except in certain limited urban areas. But the police seem capable of reasonably handling those problems.

The SAFE Act also appears to intend to make it difficult for people to possess semi-automatic weapons that can be easily converted to automatic weapons. I don’t have any quarrel with this objective. A shooting last April in the Milwaukee area by a police officer resulted from the officer being attacked by a mentally-ill suspect. During the chaos of the confrontation, the officer, fearing for his life, shot the suspect 14 times in about three seconds with an automatic handgun.

This incident demonstrates that an automatic weapon in the hands of a trained officer can do far more than the officer intended, either because of the officer’s fear or by accident as a result of circumstances. It did not take 14 shots to kill the suspect, but the automatic weapon had such fierce capability that an unintended use resulted.

Such a weapon in the hands of someone with much less training or with the intent to do harm (as at Sandy Hook Elementary School in Newtown, Connecticut, two years ago) can result in killing many more people than might otherwise die.

I absolutely support the need for legislators to draft legislation as precisely and carefully as possible. When this does not occur, the courts rightly overturn vague or miswritten provisions. However, the only provision of the SAFE Act that seems untenable, based on the real world of guns, is the seven-round magazine requirement because seven-round magazines generally are not available for semi-automatic weapons.

The reaction to New York’s SAFE Act generally seems out of proportion to most of its provisions and to its intent.

The reaction to New York’s SAFE Act, however, generally seems out of proportion to most of its provisions and to its intent. People who believe all gun regulation is a violation of the Second Amendment have not carefully read the Supreme Court’s views on that amendment. And they have not taken into account that all freedoms found in the Bill of Rights have limitations placed on them because of circumstances that must be balanced by the courts while they uphold the primary purpose of the rights guaranteed.

All of the first 10 amendments, save one, have judicial exceptions and interpretations. Freedom of speech is limited by time, manner, and location of the speech. The practice of religion, for instance, generally does not allow parents to refuse medical treatment for their children on religious grounds. The Fourth Amendment limits our right to be free from unreasonable search and seizure in a long line of cases dating back to the 1800s.

All of the rights protected by the Fifth Amendment have been subject to numerous Supreme Court interpretations. They include the rights to life, liberty, and property; to grand jury indictment; against double jeopardy and self-incrimination; to due process of law. The same is true of the Sixth Amendment rights to counsel, prompt public trial by an impartial jury, and to confront one’s accuser in criminal prosecutions.

The Seventh Amendment applies to federal civil jury trials and has also been interpreted and circumscribed in practice by court decisions.

The Eighth Amendment prohibits cruel and unusual punishment, as well as excessive fines and bail, all of which have been subject to judicial interpretation and limitation.

The Ninth Amendment grants unenumerated rights not covered by the delineation of specific rights. Most notable among these is the right of privacy, which underlies the freedom to choose contraception and abortion, and to engage in private sexual acts among consenting adults.

The Tenth Amendment reserves other rights to the states or to the people, yet it has been interpreted by the courts, as well, in ways not to everyone’s liking.

Only the Third Amendment concerning the quartering of troops in private houses has not been the subject to judicial interpretation.

We might argue about the scope and content of Second Amendment regulation, but it, too, is subject to reasonable restriction.

While we might argue about the scope and content of Second Amendment regulation, there should be no question that this amendment, too, is subject to reasonable restriction. Otherwise, my neighbor could have a shoulder-fired rocket propelled grenade launcher (RPG) or a shoulder-fired Javelin anti-tank missile in his home for his personal use. Few people would find restrictions on these arms to be unreasonable. If you do, you may be suffering from clinical paranoia, a condition that many people seem subject to, especially those who feel they must have an arsenal of automatic weapons at their immediate disposal.

The regulation of arms is a fair subject for legislative action. Those who oppose restrictions on the kind of weapons and ammunition available to the general public should have the burden of demonstrating why such regulations are unreasonable. Fair-minded people might disagree about such regulations, but the nature of their disagreements does not have to become extreme or rancorous. According to a recent Rasmussen poll, 59% of likely U.S. voters support a ban on semi-automatic and assault weapons; only 33% disagree.

The killings at the Charlie Hebdo offices were done with AK-47s, assault weapons by any definition, made to kill indiscriminately, not hunt for sport or food. But the National Rifle Association (NRA) opposes any regulation of assault weapons. While the NRA represents only about 5% of U.S. gun owners, it has an enormous effect on the actions taken by legislative bodies because of its lobbying and dominance of the gun control debate. Regarding the NRA and gun regulation, the comments of Thomas Magstadt, a political scientist, writer, former visiting professor at the Air War College, and former CIA intelligence analyst seem apt:

In fairness, NRA members are not terrorists. The NRA is not responsible for the acts of homicidal maniacs. There’s some truth in the assertion that guns don’t kill people. Clubs, knives, and arsenic will do the job. … But here’s the point that the NRA and all the other self-absolving, gun-crazy pseudo-patriots among us can’t deny: People with knives or handguns can only kill one person at a time — the killer nearly always intends to kill the victim. It’s still violence, still horrifying, still criminal, but it’s limited in scope and the limitation is in the nature of the weapon, not nature of the human.

Magstadt’s thoughts seem reasonable to me, and compelling. If our government would stop the proliferation of assault weapons, through the direct sales it permits and facilitates overseas and through non-proliferation treaties, we might be able to reduce the carnage that we have seen in Columbine, Aurora, Newtown, Norway, Peshawar, Nigeria, and Paris. Great progress has been made (though not nearly enough) in prohibiting the continued use of nuclear weapons, anti-personnel bombs and mines, and bio-chemical weapons. We could, if we had the will, eliminate the mass destruction caused by assault weapons.

It is a goal worth achieving and it doesn’t mean the government would be coming for all of our guns — just the ones intended for the mass slaughter of other people.