Lamar W. Hankins : Sweet Land of Liberty (for Some) 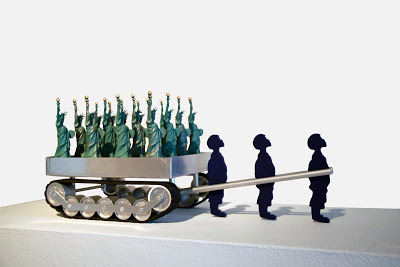 When liberty serves the interest mainly of the plutocrats who are largely in control of this country, we no longer have a republic that is of, by, and for the people.

SAN MARCOS, Texas — Fifty years ago when I graduated from high school and began solidifying my political beliefs, I looked at the world I had grown up in and started deciding what mattered.

The first thing that mattered to me was equal rights for minorities — those folks who were not allowed by either law or custom to participate fully in American life. They were denied the liberties that I enjoyed. I could not square these circumstances with the values I had been raised to believe in — the same values that had been dishonored throughout our history while being espoused by everyone from our founders, to my church, to my high school government teachers.

The irony of these contradictions did not escape my notice.

I grew up in a world (the Beaumont-Port Arthur area) where many workers exercised their right to join together with other workers for their mutual betterment. They united together to get better wages, better working conditions, better benefits for themselves and their families, which also made their community better.

Because of their liberty to associate guaranteed by the First Amendment, they were able to form unions to create better lives. When I went away to college, I learned that not everyone thought that having such liberty was a good idea — not everyone supported the idea of freedom of association even if it was in our Constitution.

The year 1965 was a watershed year for me. I upset my Abnormal Psychology professor by writing my term paper arguing the proposition that homosexuals were not abnormal. That summer, I worked for the Texas prison system. There I learned that the common practice at the Ferguson Unit, 20 miles north of Huntsville, was to beat young prisoners with rough-hewn ax handles for minor transgressions. For reporting this abuse, I was threatened by the warden and assistant warden and kept away from inmates for the rest of the summer.

It should come as no surprise that I began questioning the bona fides of people in positions of authority.

After a weekend at home from my summer prison job, I was driving back to the prison through Huntsville. As I approached the courthouse square, I noticed that it was crowded with people. I stopped to see what had drawn so many people on a Sunday evening to downtown Huntsville. I gathered information from bystanders that a desegregation sit-in was occurring at a local cafe on the square.

As this information was sinking in, a man walked up to a reporter for the local newspaper and knocked him to the ground, shattering his glasses. A policeman was standing a few feet away and saw this incident, but he turned away, unconcerned. It seems that having a reporter there to tell the newspaper’s readers what was happening in their town made the man angry, so he took out his anger on the reporter.

Once again, a person in authority would not take appropriate action to, in this case, protect the freedom of the press.

Before the year was out, I participated in my first demonstration against the Vietnam War. While I had supported Lyndon Johnson’s election as President, largely because of his embrace of civil rights and the implicit promise that he would be less warlike than his opponent Barry Goldwater, I was dismayed that he would send Americans to a small southeast Asian country to forcefully compel the people to follow our views on how they should conduct their political and economic affairs. Our founders had envisioned a foreign policy that did not intrude itself into the affairs of other nations by means of armed force.

Once again, the irony of this situation did not escape my notice.

By the summer of 1965, I had finished my junior year in college and wanted some experience in the nonacademic world. The summer work in a prison had whetted my appetite for doing something positive for others less fortunate than I, and helping to change a system that does not live up to the American values I had learned growing up.

At the end of that summer, I went to Florida to join a group of other mostly young people to spend a year working in a project to help change the lives of migrant farm workers. How naive we all were.

The exploitation of migrant farm workers has been going on in this country since the 1850s, when immigrants from Europe joined African Americans to harvest crops in the eastern part of the country. In the west, people from China, Japan, and Mexico provided the farm labor needed to harvest crops. Later, freed slaves, poor whites, Native Americans, Cubans, Jamaicans, and Puerto Ricans were employed at slave wages to harvest crops, particularly in Florida and along the East Coast.

The project I participated in was part of Volunteers in Service to America (VISTA). We were assigned to local social service agencies to help create programs to make the lives of migrant farm workers better. We did touch a few lives in a positive way, but we learned that it would take more than a bunch of idealistic, well-meaning people to change a system that was more akin to slavery than to the work that my father did as a machinist protected from exploitation by a union contract.

The lesson that I drew from this experience is that the system needs to be changed. Making the lives of farm workers slightly more tolerable with preschool programs, nutrition programs, tutorial programs, and programs that provide better access to health services has its place, but it is no substitute for changing a system that denies these people any real chance at liberty.

These experiences that began 50 years ago continue to affect my world view and inform my politics.

When I read that people believe that a health insurance mandate interferes with their liberty, I am appalled. I remember all the migrant workers I met who had incredibly hard lives without the benefit of much health care at all, who developed gangrene in wounds, who were missing half of their teeth, who were often kept in prison-like conditions by growers, who were made sick by pesticides used in the fields where they picked tomatoes and in the groves where they harvested oranges and limes, and who had to live in filthy hovels, larger, but no better than the dog houses many of our pets enjoy.

And I have learned that our founders did not seem to believe that liberty was curtailed by mandating purchases by citizens, which they did at least three times in the early years of this country, including mandating the purchase of health insurance by sailors during the administration of John Adams.

Liberty is an essential part of a free society, but one irony of America’s values is how little liberty there is for a large segment of our society — a segment in which over 300 million people depend for the food they eat. From this perspective, the liberty interest involved with being required to purchase health insurance pales in comparison to the liberty to have decent jobs at decent pay and decent working conditions.

I continue to hear people argue for their right to to have the liberty to defraud others through the kind of schemes that led to the “great recession” we are still trying to get free of. For many people, it is fine for Wall Street and the big banks to continue to gamble with depositors’ money, knowing that the government, you and I, will bail them out to keep the entire economy from failing.

While the Dodd-Frank law was well-intended, it has been too little, too late. An expanded version of the law that served us well since the Great Depression (Glass-Steagall), but was repealed under Bill Clinton, needs to be adopted, but many Democrats and almost all Republicans will not pass such a law, mainly because they are all beholden to the very entities that created our present economic morass.

The bankers want to have the liberty to do what they want, unimpeded by laws and regulations that will serve the public interest rather than their pecuniary interests.

When liberty serves the interest mainly of the plutocrats who are largely in control of this country, we no longer have a republic that is of, by, and for the people. Under these conditions, most Americans live under the dictates of the few — what a modern day John Stuart Mill might call the “tyranny of the 1%.” And liberty and justice for all becomes less than a pipe dream.

Mill wrote a fitting ending to this essay, which leads me to question whether we have ceased to be civilized, if we ever were: “[T]he only purpose for which power can be rightfully exercised over any member of a civilized community, against his will, is to prevent harm to others.”

There is much harm overwhelming our society and I see no reason to expect that to change.