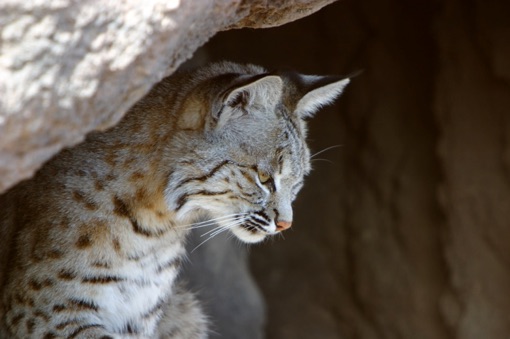 When I was in Taylor early afternoon a few weeks ago, and turning south on 79 heading back toward Manor, a gorgeous adult bobcat, appearing especially dear and vulnerable and capable, crossed under the highway, her sensual muscularity and stretching sinews moving her stealthily and otherwise openly through a culvert passing under the pavement concrete bridge. Wanting to remain out of sight, she nevertheless had to expose herself to view to continue following the prolific and flood-prone Mustang Creek, which crosses under 79. And bobcat stopped on a big grassy spot in the sunlight in the median, open to anyone passing by with the eyes to see, between the heavily trafficked roaring north and south lanes with heavy vehicles vibrating the road itself, to catch her breath and assess her position and probably to calm herself amidst the awful stress oppression of her struggle for survival in such an environment. Her mouth was open and seemed to be panting, this healthy prime of life venturer.

She had been traveling along and through the verdant teeming life of the creek and following it into the outskirts of the town of Taylor, Texas, and had now entered an area of grotesque unnatural schism and contradiction with a major creek trying to remain wild while bisecting the concrete rigor mortis of a highway. And who’s to say the highway system doesn’t carry the artifice and stresses of every destination along its way and those traveling it? And who can save the athletic savvy wild weary creature whose life we barely acknowledge, this perfectly evolved beautiful spotted and soft-furred being, who had suckled from her mother, herself likely a mother too, and who seems for that moment to be as human as any of us, moreso, even humane, engaging and defying the driven pathological mentality of the relentless mechanical deconstruction of the natural world ongoing.

And about a mile away, within sight, is a large buildings complex, looking tiny at that distance, which further highlights Bobcat’s humaneness by comparison. It’s Taylor’s infamous T. Don Hutto ICE (Immigration and Customs Enforcement) detention center complex, just north of Mustang Creek, laid out and constructed just beyond reach of the creek’s wild flood plain. Bobcat rests on the grass. The 500 captive women held at T. Don Hutto (Would he be proud?) against their will can only pray for rest within the confines of T. Don Hutto ICE detention center, a nightmarish warehouse for immigrant women, held cruelly and cynically like hostages to stall the progress of a better future we’re inexorably heading for, a better future not only for the immigrants but also inevitably for the country and world, the women held captive likely illegally, and most certainly brutally and sadistically. We are all immigrants now, and in reality always have been immigrants. You are an immigrant. Your parents were immigrants. Your children are immigrants, as will be theirs. Pilgrim’s Progress, Folks.

Of the 500 women at T. Don Hutto (a male, of course), 40 of them are mothers of children torn from them by America’s Gestapo, who are being readied to expand their work, in ways the public is not aware of.