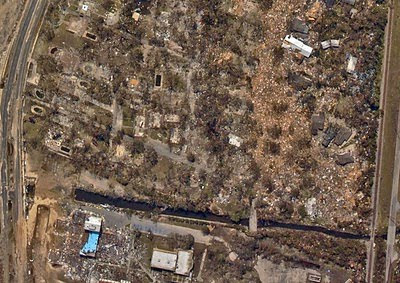 GULFPORT, Mississippi — Many of my fading memories of destruction, death and total loss have come back into sharp focus as I watch the constant news reports from Haiti. The video of dazed, thirsty, injured, and frustrated disaster victims who have lost everything is still painfully familiar.

The photo above is not of the magnitude 7.3 earthquake damage in Haiti. It is a NOAA photo of my hometown on the Mississippi gulf coast taken just after hurricane Katrina slammed ashore almost five years ago pushing a 30 foot storm surge fron the Gulf of Mexico over our coastal communities. The tidal surge pushed back up into inland bays, rivers and bayous forcing water into houses up to their ceilings just a few blocks from my home. I was grateful to have only lost a side roof.

Along the beach front, homes and belongings, large buildings, automobiles, and those souls unable to escape the wind and rising water were smashed and broken apart in the powerful deep wind driven tidal swirl. The splintered debris washed inland or was sucked back out into the Mississippi Sound. Stark, bare foundations are all that remained of stately homes, churches and businesses for more than 50 miles along the coast. Only a few centuries-old Oak trees remained, still defiantly claiming their positions.

Haiti’s earthquake took 300 years to slowly build up sufficient energy for the fault zone beneath the island to finally vault violently upward. Mighty seismic ripples heaved up and down, racing outward with energy said to equal 35,000 atomic bombs. In a blink, structures in and around the capitol city of Port-au-Prince were leveled or perilously damaged.

Thousands died instantly, and untold thousands more were buried beneath impenetrable debris. As I write this it has been five days since the quake hit at about ten o’clock in the evening. The epicenter was beneath one of the island’s most populated areas.

While Haiti’s death and destruction happened in less than one minute, those of us who rode out Katrina in our homes were hammered for 11 hours with heavy rain and sustained winds reaching more than 140 miles an hour. Hurricane Katrina was the largest natural disaster in the history of the United States with damage estimates well in excess of $150 billion. At least 1,836 people lost their lives in the actual hurricane along the Mississippi gulf coast and in resulting floods in New Orleans from levee failures. Haiti’s death toll will reach the tens, perhaps hundreds of thousands.

While trying to compare the victims in Haiti with the American victims of Hurricane Katrina may seem a real stretch, there are, nonetheless, some valid commonalities. Regardless of skin color, rich or poor, educated or not, thirst is thirst and hunger is hunger. Broken bones and painful injuries feel the same in Haiti today as they felt here five years ago when roads were blocked and help had to be coordinated while we waited, doing the best we could do.

The desperation and suffering in New Orleans, where effective rescue and help was very slow in coming, was more like what we are seeing in Haiti today. Across New Orleans, survivors sought shade and drinkable water in the sweltering August heat for days on end. Many large residential sections of the city were flooded beneath a dark putrid swill that reached the rooftops and remained for days.

National news coverage quickly shifted from the much more extensive hurricane damage along the entire Mississippi Coastline to the crisis in New Orleans. Flooding in large areas of the bowl shaped city, below sea level, did not result directly from the hurricane, but from inadequate protective levees too long ignored by our Federal Corps of Engineers, and the politicians who approve and fund their projects. But the media suffered little deprivation. The undamaged French Quarter and Bourbon Street were open in a matter of days. There was no flooding or serious damage in the metro center of the city.

But after the dead are buried, debris is removed, and urgent aid is finally provided, there is a huge difference in long term recovery between Haiti and America.

A majority of Haitian citizens live on one dollar a day and governmental control was only recently becoming effective after decades of dictatorial rule and unchecked violence. There is no concept of FEMA in Haiti. Violence and sporadic looting has reportedly broken out in parts of Port-au-Prince.

People have not had food or water for almost five days. The dead are putrefying in the streets. Tons of food, water and medical aid from the USA and around the world are piling up at the only airport waiting for Haitian bureacrats, the UN, and many other countries to agree on an aid distribution plan. Desperation is spreading in the streets of Port-au-Prince.

We must remember that violence also broke out in New Orleans after several days when it was clear that no immediate help was coming. Lawlessness, frustration, hunger and opportunistic looting broke out. Shameless racial barriers went up with blacks seeking safety, food and water being turned back by white sheriff’s officers on the bridges crossing the Mississippi river over to the basically undamaged West Bank.

It was not a pretty picture. One Parish President near New Orleans was screaming and weeping on national TV because of the seeming total lack of coordinated federal assistance. Some New Orleans police officers helped themselves to several Cadillacs from a local dealership and did not return them for weeks till the cars were finally located and the cops identified. Haitian looting will not be surprising.

Then there are the political promises too often quickly forgotten after the debris is cleared away and the news media have left in their TV trucks. I can still see Jackson Square in the partially darkened New Orleans French Quarter all professionally illuminated under careful White House direction so George W. Bush could go on national television to make promises. He promised that government would “do whatever it takes” to help those in the Katrina disaster area completely recover assuring us he “would not forget you.”

Mr. Cheney walked the streets of Gulfport with local officials nodding and promising. Ultimately, government FEMA money did help many individuals here. But the inflexible, poorly managed bureaucracy allowed wide scale fraud to flourish while red tape prevented many from getting needed help.

Basically, strong local leadership has led us to a notable recovery in our major coastal cities. Mr. Bush’s well staged promises have had little to do with our hard earned recovery so far. The $11.3 trillion national debt he left us only makes things more difficult for everyone.

Truth is that many smaller towns up the coast west of here are still begging for a grocery store. Whole sewer and water systems are being rebuilt, keeping streets torn up. Detours are legion. Doctors and many other professionals who left have not returned. But a new kind of life goes on.

New Orleans, however, still has huge problems with entire sections of the city nothing but block after block of sagging mildew and varmint infested homes surrounded by overgrown weeds. The leadership vacuum there is palpable. What happened to millions of recovery dollars for Louisiana and particularly New Orleans remains a mystery.

So now try to imagine the total rebuilding that Haiti faces. The horrible irony is that Haiti was finally enjoying an end to violence through effective police protection and people were united for the first time in recent memory. Schools had opened, street markets were busy, and long-shuttered clothing manufacturing factories had just opened again. Name brand companies from around the globe were visiting almost daily to take advantage of Haiti’s well trained sewing and fabric cutting work force. Then in an instant it was all gone.

The world is being extremely generous with millions of dollars pouring in daily to help Haiti. Promises to rebuild the country are coming from many nations. Can the downtrodden Haitians, raised in a failed state, surrounded for decades with the cruel realities of oppression and poverty believe these promises? It is difficult for the very poor to do. But this could be the rebirth of a vital Haiti if strong leadership and close supervision insure all the promises are kept.

My next article will visit what has happened to the promises and money designated for the poor here in Mississippi after Katrina. It is not a nice story.