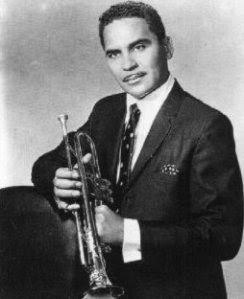 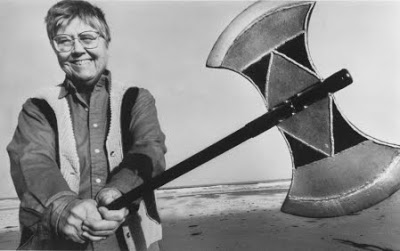 Above, Willie Mitchell with his axe and, below, Mary Daly with hers (a labrys, a traditional symbol of the Goddess).
Intertwined obit:
Soul man and radical feminist leave the stage

Life has a strange way of intertwining existences in ways that defy human reason. Like puns or anagrams that seem to reveal hidden meanings, passings away are also open to interpretation. Like the tea leaves, our leavings are also readable.

What I mean to say is that people die in pairs, creating accidental(?) marriages, pairings on the obituary page. Jacqueline Kennedy Onassis and George Balanchine. Farrah Fawcett and Michael Jackson. Despite all our efforts on our own behalf, dying, like jury duty, puts us back in the mix.

Who will we end up sitting next to on the bench outside St. Peter’s office in Heaven (or equivalent)? Even atheists and agnostics may have to admit to some degree of posthumous mortification looking back at their obits in the newspapers.

So who are the latest couple to have left together to go to tell their human stories to Whomever? None other than Willie Mitchell and Mary Daly. Who? Let’s just say this may be one of the oddest obit couples ever, or perhaps we are distilling ourselves somehow as Humanity.

Willie Mitchell was the trumpeter, bandleader and producer who brought us the third (and final) wave of sweet soul music from Memphis. As you probably know, Memphis sits at the top of the Mississippi Delta, the gateway from the Deep South to the North. The city that brought us Elvis (like Willie Mitchell from neighboring Mississippi), Sun Records (Elvis, Carl Perkins, Jerry Lee Lewis, Johnny Cash, Howling Wolf), Stax Records (Booker T & the MGs, Otis Redding, Isaac Hayes). Originally it was W.C. Handy, another trumpeter/bandleader who “discovered” the Blues in Memphis. That would have been about a hundred years ago.

Willie Mitchell had a sweet band but he was looking to break into record production. He found an awkward kid from Michigan who had a great voice but still hadn’t found his style. Al Green could sound like Marvin Gaye, or Wilson Pickett. Willie Mitchell’s advice was simple: try sounding like Al Green.

The result, “Let’s Stay Together” (from 1971) on Hi Records is perhaps the sweetest soul song ever laid down. Willie Mitchell continued as Al Green’s producer/mentor for years during the periods when Al (like Little Richard) switched from sacred to secular styles. Willie Mitchell produced sweet soul music after the assassination of Dr. Martin Luther King (also in Memphis).

That was a miracle.

His deathmate couldn’t have been more different. Mary Daly was the quintessential radical lesbian separatist. Instead of “Let’s Stay Together” her message was surely: men stay away. She was a white Jesuit theologian who, once she had been granted tenure at Boston College, defied the Catholic Church to create a woman-based Wicca movement within the university’s teaching environment. It took decades for the school to finally get rid of her.

By that time she had published many books in her own super creative woman language, an alternative to male dominant Indo-European usages. Words like “hag” and “crone” took on new meanings. You can be sure that if this had been the Middle Ages and not the 1960s, Mary Daly would have burned at the stake. Or maybe been dunked to death. Instead she was able to teach a separatist feminist course at a formerly all male seminary and totally exclude men from her classes.

Yes, this was one tough woman.

In some ways her life was reminiscent of that of Anne Lee, who created the Shaker Church in America as a feminist/separatist experiment in the 1780s. Ms. Lee was beaten to death by angry Massachusetts witch hunters but her movement flourished for almost 100 years.

Mary Daly lived to see her defiance of the Catholic Church and her open lesbianism flow into the mainsteam. Perhaps not a remnant of the original all-embracing matriarchy from the ancient past, more like another quasi-male intellectual academic bent on self-differentiation. Still, Mary Daly hit a note that resonated with many other women totally sick of the male world. May their Circle someday open up for all of us…

You’d have to say that Mary Daly and Willie Mitchell represented two totally honest aspects of our life. Hopefully as they journey together through eternity, born in the same year, leaving two days apart, forever wedded together, their spirits can find a way to reinspire us to do both things: stay together, and relearn how to truly respect women.

1 Response to Willie Mitchell and Mary Daly : Partners in Demise