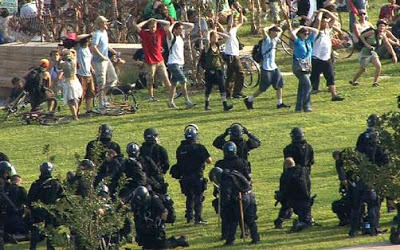 Shouting “our streets, their war,” about 10,000 demonstrators — far fewer than the 50,000 some had predicted — flooded into downtown St. Paul’s narrow streets on the steamy first day of the Republican National Convention.

By Monday evening, authorities said 283 people had been arrested, including 129 on felonies. Dozens were pepper-sprayed and tear-gassed. One police officer was punched in the back, another suffered from heat exhaustion, and St. Paul hospitals reported nine minor injuries and several heat-related cases in emergency rooms.

While block after block of marchers chanted and peacefully waved signs, the carnival atmosphere turned increasingly ugly as Monday wore on. Before the bulk of the demonstrators finished their march, rogue bands of a few hundred protesters splintered off. Some smashed windows at Macy’s and a downtown bank building, others challenged police by blocking roads.

Hundreds of cops, sweltering in heavy riot gear, swept in to block streets and protect delegate buses as the St. Paul police requested help from 150 National Guard troops by 3 p.m.

“Their efforts were nothing short of heroic,” Coleman said. “They did not fail. They did not take the bait.”
St. Paul Police Chief John Harrington said the trouble makers came from a half-dozen loosely organized groups totaling up to 180 people, representing a small fraction Monday’s turnout.

A cross-section of dissent
Protesters came from across the state and the country on what was expected to be the largest demonstration of a week filled with protests. They marched after a sun-drenched noontime rally on the state Capitol lawn, snaking down a route negotiated for months and circled in front of the Xcel Energy Center as delegates arrived for a session cut short by Hurricane Gustav.

Cu Nyugen, a Vietnamese native who lives in Minneapolis, brought his 12-year-old daughter, Mai, on the eve of her first day of sixth grade.

“It’s important for the younger generation to see and learn about different points of view,” Nyugen said.

Alberto Arenas, a professor at the University of Arizona, came from Tucson to let people know not all Arizonans support their senator’s presidential bid.
Bill Schuster, a Vietnam War veteran from Blaine, wanted “to do my part because I don’t like what’s going on and I don’t like us being in Iraq.”

Marie Williams, 77, of Minneapolis, carried a “Dissent is Patriotic” placard.

“I started coming to protests with Paul Wellstone and I haven’t stopped,” Williams said. “I can’t count up to 50,000, but this is a lot of people.”

Organizers’ hopes of 50,000 marchers fell short and some were disappointed by the turnout, wondering if the 90-degree heat, aggressive police tactics and President Bush’s cancellation thinned the crowd.

“I’m disappointed – this is far too few people,” said Lennie Major, a teacher from Mounds View. “We needed 10 times this many to make an impact, this will only be a blip.”

But P.J. Goodette, who came from San Jose, Calif., smiled as he waved a turquoise flag with a peace symbol and high-fived a line of Minneapolis police officers standing by their bicycles.

“I can feel it in the air,” he said. “Things are changing and I’m here because I want to be part of it.”

Escalating violence
The peaceful mood started to change after 1:30 p.m., when several groups broke off and began resisting police. At 3 p.m, about 250 people locked arms to block delegate buses near Robert Street and Kellogg Blvd.

In a standout with 100 police officers, authorities warmed them to disperse or they’d start launching tear gas. Minutes later, when the group refused to move, officers tossed in a dozen tear-gas canisters, prompting the crowd to retreat two blocks down.

“Most of [the demonstrators] were pretty good,” said CarolLee Folsom , a bystander who used to work for the Ramsey County sheriff’s office. “But you don’t know what any of these people are going to do. And they warned them, so anybody that wanted to get out could have gotten out.”

Demonstrator Andrew Sigmundik, 18, disagreed and said the police were “aggressive” and went “overboard,” and that he witnessed “one guy in a wheelchair getting Maced and some other people getting hit by those police bats.

“Nobody was trying to cause destruction or violence,” he said. “The idea was to just block the streets. We were just trying to disrupt the delegation, and I think we succeeded.”

Harrington, the police chief, said the first illegal salvo happened about 11 a.m., when a Dumpster was shoved into an occupied squad car down W. 7th St.

“I’m not sure how anyone can say that’s protest,” said Harrington said.

About 2 p.m. protesters dropped bent nails into the intersection at 6th and Wacouta Sts. The group swelled to more than 200 as they turned up 4th St., tossing garbage cans and newspaper kiosks into the road.

Then a few marchers broke off and threw objects, shattering three windows in a bank building at 4th and Minnesota Sts. As sirens screaming in the distance drew closer, drowning out the shouting crowd, a masked marcher threw his bike in front of the lead squad car.

Others continued up 6th, closely pursued by more than a dozen slow-moving police cars. A few officers walked in front of the cars, clearing the barriers the marchers had thrown in the street. By 6th and Cedar, many of the marchers had moved to the sidewalk, and were beginning to disperse. A few smashed out three windows at the Macy’s store.

Many members of the group wore kerchiefs pulled up over their faces and one person jumped up and down a few times on the roof of a parked police car before breaking its windows, starting with the back.

After that, the group broke apart running in several directions. Some hid behind cars in a parking lot on that corner, until the commotion died down and then they calmly walked away.

1 Response to Latest from St. Paul : More Than 280 Arrested