Leaving Behind the Bunker and Barrier Mentality 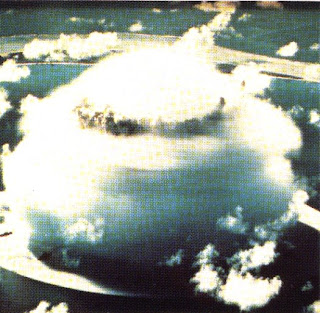 Leaving Cheyenne Mountain: How I Learned to Start Worrying and Loathe the Bomb
By William Astore / April 17, 2008

It took more than four years just to excavate and construct that mountain redoubt outside of Colorado Springs, that Cold War citadel whose two huge blast doors weighed 25 tons each. Within its confines, under 2,000 feet of Rocky Mountain granite, fifteen buildings were constructed, each mounted on steel springs, each spring weighing nearly half a ton, so that, when the Soviet nukes exploded, each building would sway but not collapse.

When it became operational in 1966, the Cheyenne Mountain Complex was the ultimate bomb shelter. Its 200 or so crewmembers were believed to have a 70% likelihood of surviving a five-megaton blast with a three-mile circular error of probability, even if the surrounding countryside became an irradiated wasteland. Today, over four decades later, the Complex remains an important command center, though last year the military announced that it would now serve primarily as a back-up facility (on “warm stand-by,” in military jargon).

From 1985 to 1988, in the waning years of the Cold War, as a young Air Force lieutenant, my job took me inside that mountain citadel. The approach to it wasn’t in any way awesome, since the mountain, at the south end of the Front Range of Colorado Springs, is overshadowed by Pike’s Peak. Except for all the communication antennae blinking red at night, you’d hardly know that it was the site of a major command center for a future nuclear war. Yet each time I drove up its access road, its solid, granite bulk made an impression; so, too, did the security fence topped by cameras and razor wire, the security police toting M-16s, and the massive access tunnel, bored out of solid rock and paved for vehicular traffic that still leads inside the mountain to the actual command centers.

Like cereal box atomic decoder rings and “duck and cover” exercises, the Complex is a relic of the Cold War era. I entered on a bus which, though painted Air Force blue, was similar to the ones I had taken in grade school. On a few nights, I left work after the last bus took off and so had to hike the third of a mile out of the tunnel, a claustrophobic and often bone-chilling experience in the windy and wintry Rockies — until, that is, you emerged into a starry night above with the lights of the city twinkling below.

Of that “mountain,” meant to corral and contain our nuclear fears, what struck most first-time visitors were the huge steel-reinforced blast doors, ten feet high and several feet thick. They were supposed to seal the Complex, protecting it from a nuclear strike. Then, there were the enormous springs (1,319 in all) upon which each of the 15 separate buildings inside that mountain rest. I liked to think of them as giant (if immobile) Slinkies. As visitors got their bearings and looked around, they were sometimes disconcerted by the bolts embedded in the granite walls and ceiling. These held wire mesh, meant to stabilize the rock and protect against falling shards. Lots of exposed pipes and cables gave the mountain a style that might be termed “early industrial chic” — and one that you sometimes see echoed today in high-end lofts and dance clubs.

The blast doors were usually open — except, of course, during “exercises,” when the mountain “buttoned up” its self-contained world. Along with enough food and other provisions to weather any initial rounds of Earthly devastation, the mountain also had four freshwater reservoirs, each with a total holding capacity of 1.5 million gallons. The inside joke was that the Complex, technically an Air Force station, had its very own navy — the row boats used to cross the reservoirs (though, sad to say, I never used one). Today, when I think of them, the River Styx and Charon come to mind.

Images of the underworld were then, and remain, all too appropriate. By the time I was inside Cheyenne Mountain, we knew it was vulnerable to a new generation of high-yield, highly accurate Soviet Intercontinental Ballistic Missiles (ICBMs). In case of a full-fledged nuclear war, as a popular poster of the 1970s put it, we had no doubt that any of us could “bend over and kiss your ass goodbye.”

The citadel that had been built to ensure official survival during a planetary holocaust was, by then, sure to be among the initial targets struck by those ICBMs — perhaps a dozen or more warheads — to ensure a “first strike kill.” Our job was simply to detect the coming nuclear attack by the Soviets and act quickly enough to coordinate a retaliatory strike — to ensure that the Soviet part of the planet went down — before we, too, were obliterated, along with Colorado Springs (a “target-rich” city that includes Fort Carson to the south, Peterson Air Force Base to the east, and the U.S. Air Force Academy to the north).

Launched over the North Pole from missile fields in the USSR, those Soviet ICBMs would explode over American cities in 30 minutes. Reacting before they hit placed a premium on decisions based on computers and early warning satellites. Due to the hair-trigger nature of such a scenario, human errors and system malfunctions were inevitable. One false alarm came on November 9, 1979, when a technician mistakenly loaded a “training tape” that simulated a full-scale Soviet missile attack. Two false alarms followed less than a year later, on June 3 and June 6, 1980, and were eventually traced — according to an official Air Force release — to a defective integrated circuit, a silicon chip costing less than $100. In each case, the Strategic Air Command (SAC) alerted ICBM crews and scrambled air crews to nuclear-armed B-52s, which were warming up engines for takeoff before the alarms were rescinded.

Read all of it here. / TomDispatch / The Rag Blog

This entry was posted in RagBlog and tagged Military, U.S. Government. Bookmark the permalink.